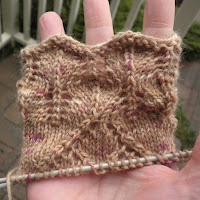 I've marked the pattern Christmas in Tallinn as done. It's written as a pattern for a Christmas stocking - that's something I'm not particularly interested in knitting. I tried knitting it as a wearable sock but the result was disappointing. There are lots of modifications I could try for a better result, but I'm just not feeling it. It's in time out for now, and possible forever.

Moving along, I've cast on for a pair of Friday Harbor socks. This sock is knit across 49 stitches so I had to look for a heavier sock yarn that would work on 2.75mm needles. My LYS has just started carrying a 5-ply sock yarn from Regia that fits the bill, so I thought I'd give it a try. So far, I'd have to say I'm underwhelmed by it. It's sturdy and somewhat scratchy rather than soft. And what's with the red splotches?

After knitting just a couple of inches, I've decided this sock is also too small; it certainly won't fit around my heel. Nooooo! A number of Ravelers reported the same issue in their project notes - even those using the recommended yarn - so I think I'll cut my losses now and start again with 60 stitches as some of the others have done. I don't think I could stand putting in all the time and effort for another sock that doesn't fit. Barring anything unforeseen I should manage to restart and reknit the sock to about the same point on my train ride to work tomorrow.

In her introduction to the pattern, Nancy Bush says the inspiration for these socks comes from many visits to the Pacific Northwest. The cuff features a leaf pattern and then the leg features a lace pattern that evokes the wake of a sailboat which carries on down the top of the foot. For just a few minutes I considered continuing the leaf pattern all the way down the sock, but I doubt it's stretchy enough for a good fit. But it's really cute! Now let's hope things go a bit more smoothly starting tomorrow!

Posted by Minding My Own Stitches at 4:35 PM

I think your right to just re start if you know its not working now, why go to all that work, I think you've knit enough socks to know if they will fit or not. I do like the brown/beige colour of the yarn but yes what is with the red bits lol,
Hope you make good progress with the new cast on.

I like the pattern, it is pretty, but I get your drift about making it only to realise it doesn't fit, heartbreaking.

Hope you manage to resolve it on your journey. Have a good week!

I had to make the picture big to see the splotches, but yep -- there they are. They don't look bad though.

Grrrr. I really dislike it when I spend a lot of time on something and then it doesn't fit. I'm sure that you will make it work though! I also have had the same experience with Regia as you have. I'm not sure why some people really like it.

Your other sock could just be a small Christmas stocking... maybe for your kitty?

I like the new sock, but that does seem like way too little stitches, even for a sport-weight.

Good that you read others' notes and caught that mishap. Good luck on this sock.

A very pretty pattern. Restarting sooner rather than later is usually for the best. I find Regia yarns soften up a lot when they are washed

Sorry you weren't feeling it with the first sock, but I understand the not feeling it. The 2nd one looks interesting, too bad you had to frog

I love the lace pattern. I'm glad you haven't done too much before ripping this one, is horrid when you've spent ages on something and it doesn't fit. I'm trying to make more effort to check the comments on Ravelry before I start patterns these days :)

What a shame, and I'm so sorry that the yarn isn't lovely.