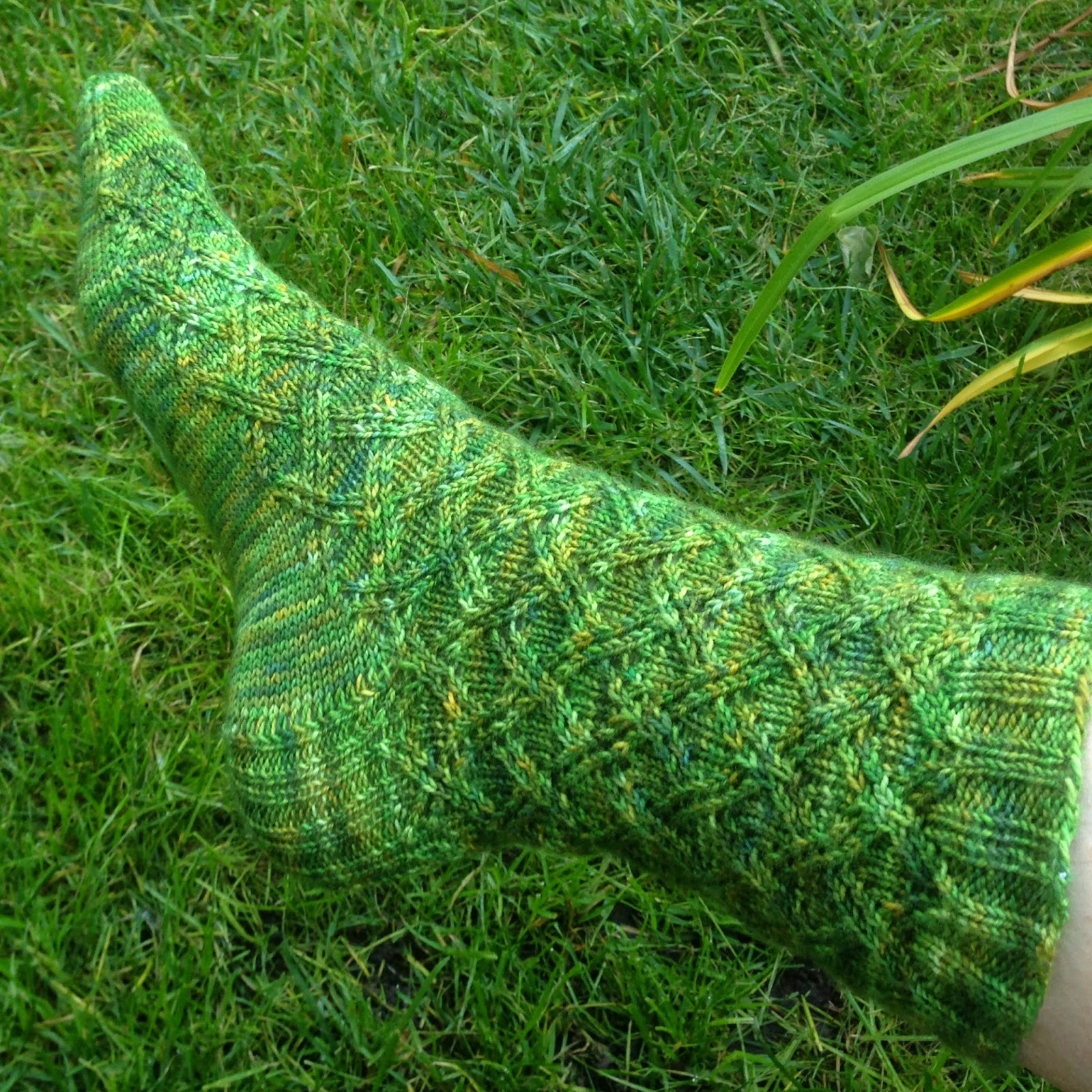 ... or camouflage socks as they've come to be known. Seriously! These socks are almost invisible in the grass of my backyard!

The pattern is Farmer McGregor and it's the last pattern of the Socktopus KAL. Nice to go out on a high note - this pattern is gorgeous! With all those twisted stitches I worried that the knitting might be painful, but it moves along at a nice pace. I'd be further along, except I borrowed the 2.25mm needles for some secret Christmas knitting. By this aft, those needles should be free for me to cast on sock two.

All that crisscrossing creates a fabric that's somewhat thick and inflexible so you need to cast on more stitches than you might think. For patterns like this with unusually high stitch counts, I add a decrease row at the top of the heel flap and another to finish the instep to take up the slack and transition smoothly into a fitted heel and toe. Works like a charm.

That high stitch count also means I have to pay attention to yardage so I don't run out. Yep, yarn chicken again! Not to worry though; sock one weighs in at 51 grams, leaving me with 54 grams for sock two. The yarn is a "Frog Prince" colourway on a based called "Twisted House Cat" from Wandering Cat Yarn. The extra twist of this sock yarn makes it lovely to work with and the stitch definition is fantastic. And, as you can see, this colourway is also fantastic.

I've got an out of town guest coming later this week so I'd better get moving to get the spare room ready. And I've signed up for the "Seasonal Sock Syndrome KAL" over at Revelations of a Delusional Knitter so I need to think about what socks and what yarn for fall. So far we're having THE most gorgeous fall weather ever, so I'm a huge fan of autumn at the moment. I think my inspiration may come from that old April Wine song: "Red and yellow, seasons changing gear ..."
Posted by Minding My Own Stitches at 10:07 AM 18 comments: 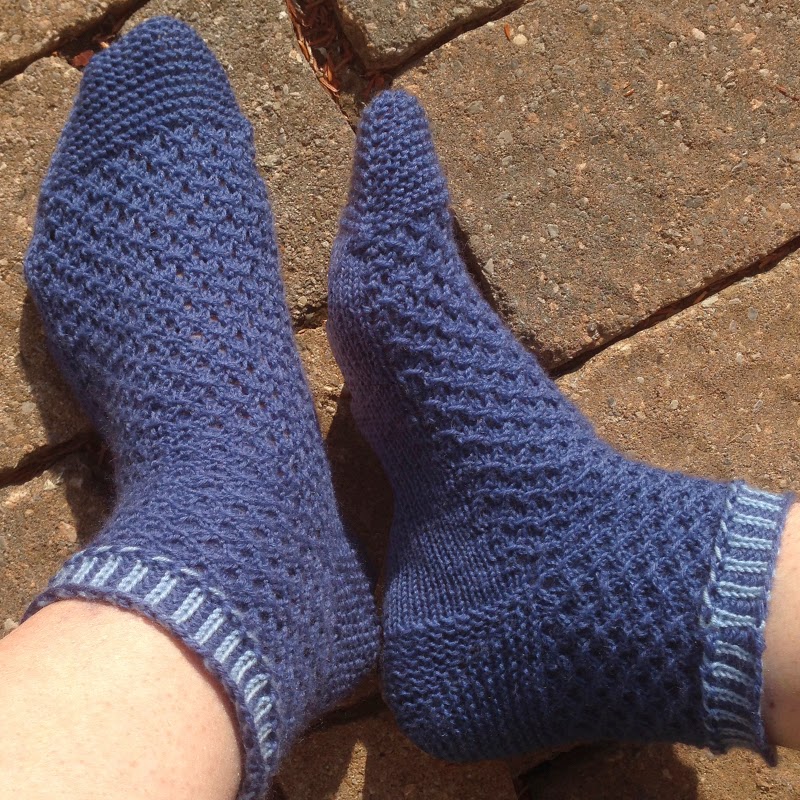 Last week I started (and finished) Om Shanti socks. Truth be told, I'd been avoiding this pattern. The KAL for this pattern ends in September so it was decision time: knit them to complete the KAL? or skip them and disqualify myself from the "Hall of Fame" for completing all the Socktopus patterns? Of course I knit them. 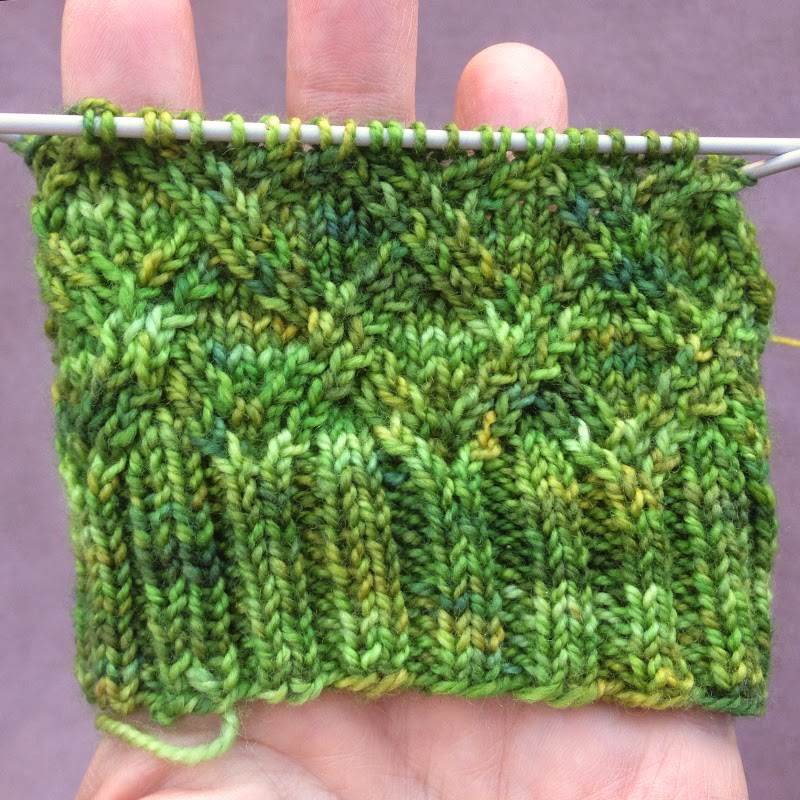 Sometimes when I knit a pattern that doesn't appeal to me, the pattern surprises me. I might learn a new technique that I like, or I might like the pattern better than I thought I would; you just never know. In this case I did pick up a tip about how to modify a short row w&t garter stitch heel for a higher instep, so I'm pleased about that. But I still don't like these socks.

I had planned to knit these from MCN, however these socks are knit on 2.5-2.75mm needles so I switched to a sport weight yarn. It's always best to knit socks at tight gauge; they're more comfortable and more durable that way.

So what don't I like about these socks? Well, first of all they're thick and entirely unsuitable for wearing in shoes. The designer specifically calls these "bed socks" so that was not a surprise, but I have no use for bed socks. My feet poke outside the covers at night to cool off. As well they're ankle socks, which aren't my thing. I wear socks to keep my feet warm; I don't want wintery winds whistling up my pant legs around my ankles. And then there's the cuff with its horizontal Kihnu Vits braid and corrugated ribbing. Interesting design choices - neither of these elements has any stretch. Don't you want your sock cuff stretchy? Must I struggle to them pull on and off over my heels?

Nope, these socks are done, photographed and will be promptly frogged. And the best remedy for sock pattern disappointment is to cast on a different pair. So that's exactly what I did; I've cast on Farmer McGregor socks. What a difference! Loving these! And look, it's the last pair from Socktopus!

Posted by Minding My Own Stitches at 7:41 AM 9 comments: 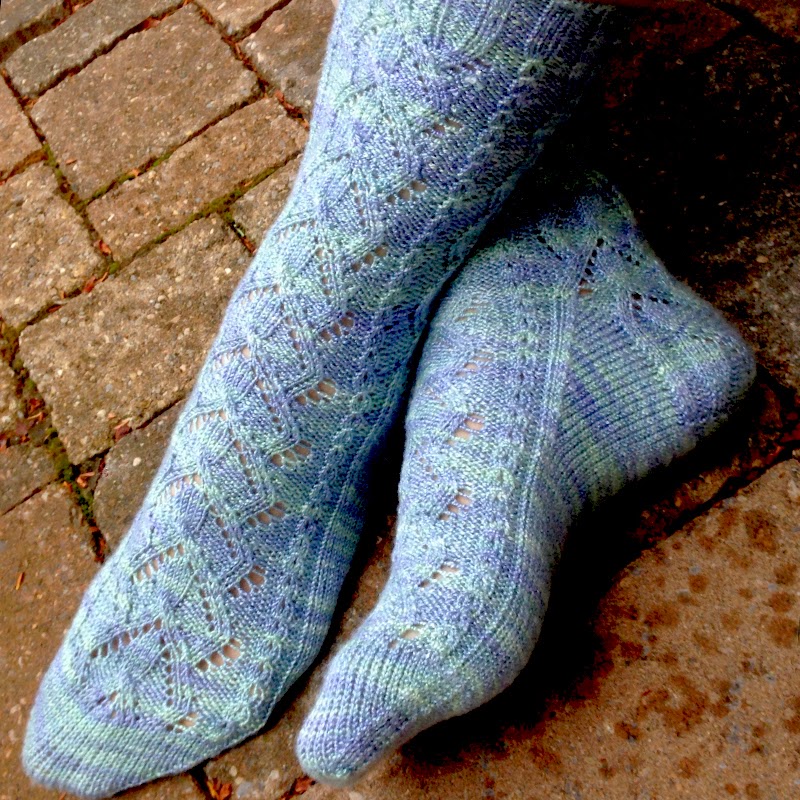 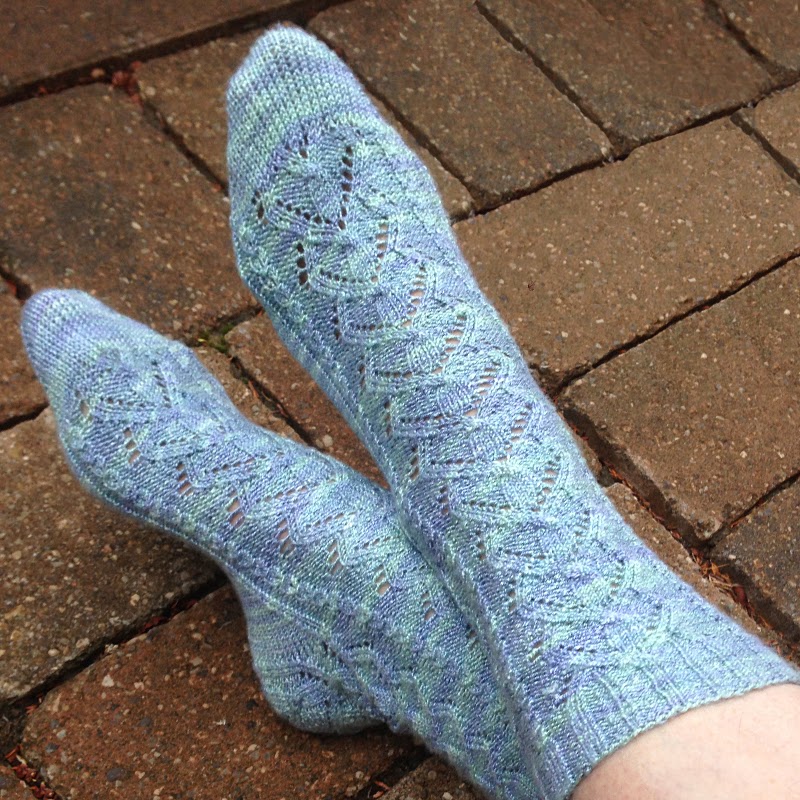 As I knit the first few inches of these Marilinda socks in Dye-Version stretch bamboo sock yarn I was worried that the yarn was too busy for the pattern. Unless I'm knitting in a solid colour, I almost always think that. I guess it's all about the pattern for me with sock knitting - that's why I typically buy tonal yarns. The only thing to do is to knit a few more inches, try the sock on and then decide. More repeats can reinforce the details of a pattern, and, as every lace knitter knows, stretching the fabric open can make the pattern pop too.

I'm sure you'll agree, now that we can see the finished socks, that those initial fears were groundless. The pattern and yarn are just fine together!

It's always a nice touch when the cuff ribbing flows into the main leg pattern. In this case there's a transition chart, and the main pattern slowly emerges from the ribbing. Awesome! And the heel has it's own chart too, where the pattern slowly dissolves back into ribbing. More awesome!

One more nice thing? A plain stockinette wedge toe. Although it would be awesome knitting fun to knit another pattern chart for the toe; if I'm to wear them an unpatterned toe is preferable. I can't stand the feeling of decreases across the tops of my toes or under the pads of them. Sorry, that's just the way it is. I've been known to rip back patterned toes and reknit them to plain stockinette.

Now, I'd better get moving with Om Shanti. I need to get them finished and posted in the KAL thread on Ravelry before the end of September. Not to worry - they're knit on 2.75mm needles. That should take no time at all! Contrast that to this Fox Paws pattern .... Wandering Cat is trying to tempt me into a KAL with this pattern. That'd pretty much wreak havoc with Christmas knitting plans, wouldn't it?!

Posted by Minding My Own Stitches at 7:50 AM 16 comments: 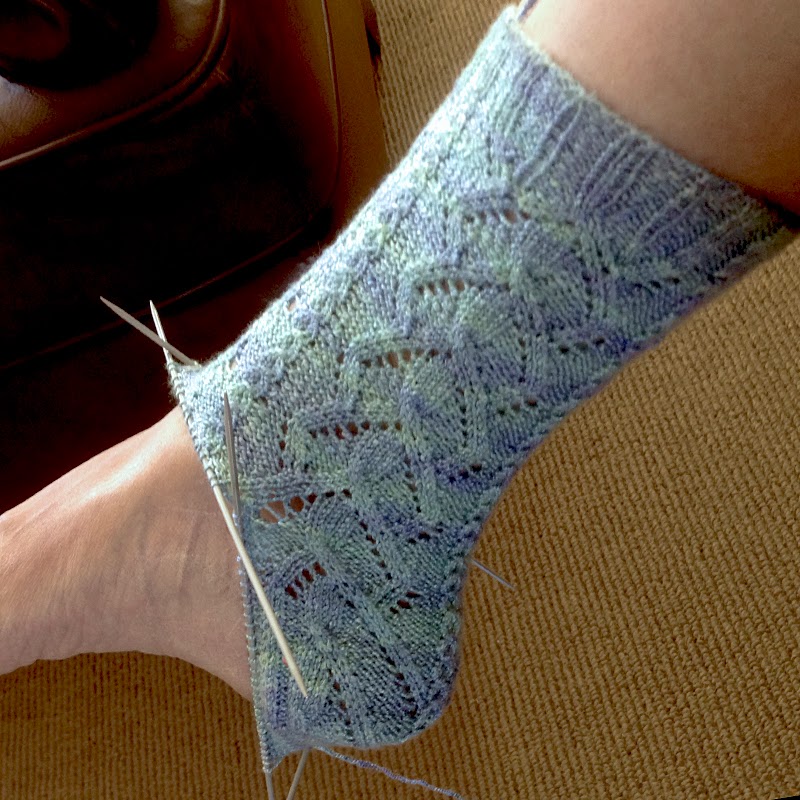 Although for KAL timing reasons I probably should have cast on Om Shanti, instead I cast on Marilinda. It just looked like more fun. When I first glanced at the pattern I thought it was a lot of cabling, but it turns out to be mostly travelling stitches. That's a good thing as far as I'm concerned. I don't mind an occasional cable, but a lot of cabling is... well... tiresome. There are lots of fun charts, with a handful of symbols and corresponding stitch sequences that I have never seen before. That's kinda fun. And the heel flap is patterned; I just love that!

The yarn is Dye-Version stretch bamboo sock which I picked up from a Ravelry destash. I've been wanting to make a pair of socks for my sister, but her skin condition can be exacerbated by wool. I hope the Bamboo/Lycra blend is more soothing. It's interesting to knit. It's soft and a bit slippery with quite a bit of sheen to it. It looks like it wants to worm, but it seems to knit smoothly and the stitch definition is fine. It's not splitty like you'd expect for bamboo, and the lycra gives the bamboo a much needed springiness and stretchiness. So far, so good, other than a stripey-ness that I'm not entirely enamoured with.

I'm not very far along - just the first leg and heel knit - but the pattern actually flies pretty quickly. I just haven't had much time to spend on it. There are couple of reasons...

First, I've got a new computer at work. Thursday I finished the migration from old to new. Friday I spent downloading and updating software. Feels like I entered my Apple ID a thousand times! So far so good though; seems almost everything works exactly as it should. And the new MAC is lightning fast!

Second, I've taken over moderation of a group on Ravelry. It's my first experience with something like this so there's a bit of a learning curve. I've created and uploaded new badges, I've learned how to sticky threads and now I'm trying different things to encourage the participation of the group members. A big thank you to Wandering Cat Yarns for their support in donating a skein of yarn as a prize for our first KAL.

Third, I've been working with my brother to self-publish a series of stories to raise money for the restoration of a historic train station in McAdam, NB. He wrote a Christmas novella which will launch on November 9th ... well, presuming I got the illustrations done and the books printed. Looks like we're on track (lol - a train joke); the files are with the printer and we expect the first samples in the next few days.

Fourth, I've finished the blanket I've been working on since July. The baby is due early to mid December, however as overseas shipping can take 6-8 weeks unless you pay premium rates, my deadline for this was looming. I hope it will arrive to the expectant grandparents in time to gift to the expectant parents at a baby shower in the weeks before delivery. The pattern for the blanket is Sea of Dreams - this is the second time I've knit it and it's just a gorgeous the second time through. The yarn is Baby Cashmerino with I ordered from LoveKnitting.com. My yarn arrived in a sheer organza bag - just the perfect thing in which to wrap the finished blanket. Those adorable little gift tags you see? They're handmade by my friend Jane - her Etsy shop is here.

Posted by Minding My Own Stitches at 3:44 PM 12 comments: