What is "Giving Tuesday"? This excerpt from GivingTuesday.ca explains:

It is a global movement for giving and volunteering, taking place each year after Black Friday. The “Opening day of the giving season,” it’s a time when charities, companies and individuals join together and rally for favourite causes. In the same way that retailers take part in Black Friday, the giving community comes together for GivingTuesday.

GivingTuesday harnesses the potential of social media and the generosity of people around the world to bring about real change in their communities; it provides a platform for them to encourage the donation of time, resources and talents to address local challenges. It also brings together the collective power of a unique blend of partners - nonprofits, civic organizations, businesses and corporations, as well as families and individuals - to encourage and amplify small acts of kindness. Across Canada and around the world, GivingTuesday unites communities by sharing our capacity to care for and empower one another.

This year YarnCanada.ca is getting involved. They're giving away yarn to groups and individuals who knit or crochet for good causes. TWO THOUSAND DOLLARS WORTH OF YARN!!! One of the groups I knit for - The Warm Hands Network - has applied. And I've applied as an individual asking for yarn to knit children's sweaters for my local knitting group - Warm Up Haldimand. If you or your group can put donated yarn to good use, then you'll find the link below the screen snapshot below for the entry as well as an excerpt from YarnCanada's website with all the details. 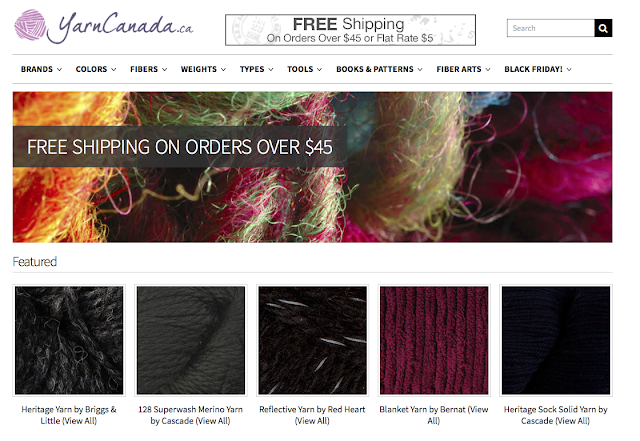 We're Giving Yarn To Your Good Cause

We know so many wonderful people knit and crochet for good causes. We'd love to hear your stories and help out! We'll be choosing 12 individuals and groups to get a total of $2000 worth of yarn to use towards their projects. Since we get requests from all over, and we'd like to do something nice for our neighbours, this is open to Canadians and Americans.

All you need to do to apply is fill out the form... and tell us your story. What will you use the yarn for, what impact has this or previous projects had, and anything else important to your story. If you have any photos we’d love to see them too.
Posted by Minding My Own Stitches at 11:35 AM 1 comment:


Over the last several weeks there's been knitting, but not much blogging has happened. So this is going to be a picture heavy catch up post.

Somewhere Socks were done in time for that early November birthday. They fit her perfectly and she loves them! 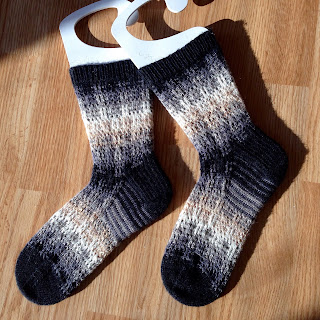 Tuxie Love Socks are also done. I cut the cuff off the first sock, picked up the stitches and then increased from 64st to 70-72 sts for the three colourwork sections. And then knit sock two to match. These were a week late for the birthday, but in time for my first opportunity to catch up with the birthday girl in person, so all good. And she loves them too! 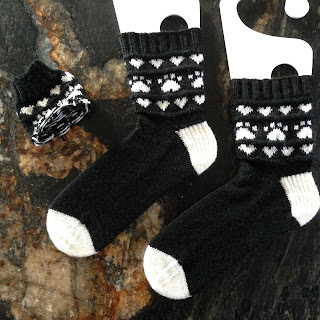 I joined a local knitting group - Warm Up Haldimand - and have so far knit a pair of mitts for donation to local charities. I decided to knit use sock yarn (from stash), and knit a folded-over cuff from a single strand of sock yarn, and then the body of the mitt and thumb from double-stranded. Makes for nice warm mitts, and puts some uncooperative pooling sock yarn to good use. There's another group meeting coming up, so I'd better cast on another pair soon! 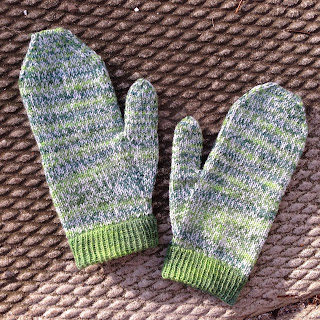 Friends of ours are expecting their first child in the spring, and we're having dinner with them in early December so I knit a little sweater to welcome their baby girl. The pattern is In Threes which I have knit before. It knit up really large last time so I went down a needle size and knit the smallest size. As well I cast on more stitches than written to widen the neck opening. And I used up the leftover yarn making a hat, mitts and a little crocheted crown, which are not shown in the photo. It's all wrapped and ready to go. The yarn is Bergere de France Merino, and it is absolutely lovely to work with! 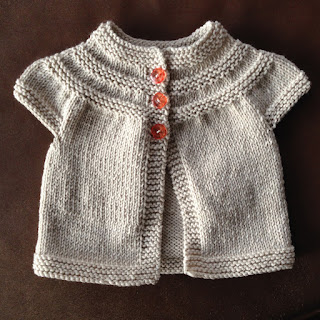 A couple of years ago I knit bunches and bunches of fingerless mitts to make use of yarn that I had been given by a friend whose injuries had forced her to give up knitting. About a week ago I got a facebook message from someone to whom I'd given a pair. Was I still knitting? she asked. If so, her sister was always admiring her fingerless mitts - could I knit a pair for her. As it happened I had a couple hundred yards of approximately DK handspun merino that might suit exactly that. So I knit another pair of Susie Roger's Reading Mitts. They were on and off the needles in a matter of days and are already in the mail to her. 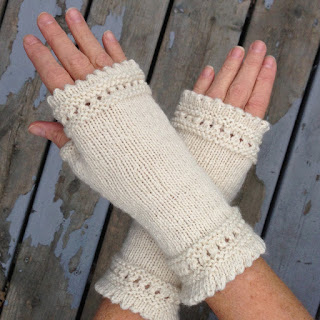 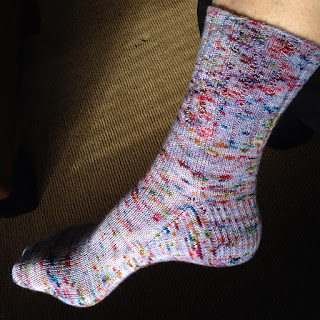 And last but not least, Gavin needs a scarf. So I collected up my blue and grey sock yarn scraps and started a linen stitch scarf. It's cold and windy these days, so I need to get a move on with this! I expect to knit this fairly monogamously for the next week or two. 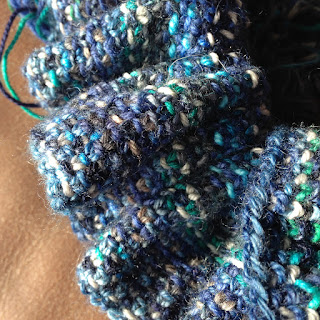 Poor Gschnitztal Socks! Set aside again, although they are now well underway. Switching to shiny metal needles has made a world of difference in seeing the stitches in dark yarn. And a floor lamp behind me has helped with poor evening light. I'm not really sure when I'll get back to these.

Happy Thanksgiving to all my American friends! I hope you're enjoying time with family and friends. We get Black Friday sales here in Canada now, and we almost bought a TV we don't need yesterday. Imagine $550 no tax for 55" 4K Smart TV! That's just crazy!
Posted by Minding My Own Stitches at 5:26 PM 6 comments: