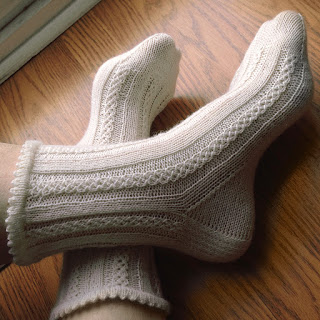 First let me apologize to everyone in the Year of Projects group. My last week got completely away from me and I didn't get around to read and comment on everyone else's posts. I'm going to try to catch up in the next few days, but in the meantime thank you for your patience!

That second "Fascine Braid Sock" was on and off the needles in just about no time at all. The most time consuming part was finding decent light to take a photo. And "decent" was about all I managed - the finished photo isn't great but it was the best I could manage after several attempts.

I won't gush too much more over the pattern except to say once again how easy it is and how charming the result is! Highly recommended (although I did make mods as mentioned on my project page).

As well I had a rethink about the March KAL for the SolidSocks group on Ravelry. The theme is "blue" and although I do have a skein of blue in my stash, I suddenly remembered that CoBaSi sock yarn. It started out knit into Darjeeling socks in August of 2015 for the Cookie A Sock Club. I hated those socks so I frogged them and cast on Twisted Flower. That pattern was much more promising, but I dropped a stitch, made a botched attempt to tink back and then set the whole mess aside in disgust. Hmmmm ... maybe now's the time to frog it all again and restart? Yup, I think so. It's a lovely yarn to knit, it suits the pattern perfectly and what a relief to get one more WIP off my Ravelry project pages!

Of course it's not quite March yet, so what to work on now? Another glance at the WIPs on my Ravelry project pages led me to pick up my Crest socks again. These were set aside in June 2016 - presumably because all those crossed stitches made for very poor travel knitting and I was running around like a crazy person while in the process of buying a cottage. The charts are intimidating - although the knitting of them is easier than the contemplation of them - so picking them back up was also a bit daunting. But within minute of restarting I was back in the swing of it. Sock one is done, and I'm two-thirds of the way through the chart for sock two. My plan now is to finish these entirely before I turn my attention to the SolidSocks KAL. I don't want to get stalled on these again!

And then it's definitely time for another Vanilla-ish sock again after all of that. Something fun and mindless I think! I'm entirely open to pattern suggestions, particularly if it'd work with variegated yarn. Ideas?
Posted by Minding My Own Stitches at 10:31 AM 13 comments: 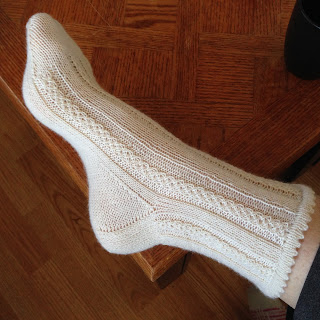 I think I mentioned last week how quick and easy this "Fascine Braid Socks" pattern is, but I'm blown away by how quick. I finished sock one on Friday, and at time of writing I've finished the gusset decreases on sock two. This pair will be finished in the next day or two.

It's a lovely sock! The braid is very simple and effective, and increasing the stitch count worked out to a very well fitting sock. Of course, aside from the braid detail it's essentially a ribbed sock so it's pretty much guaranteed to be an awesome fit. It's a bit snug in the length of the foot on my size eleven feet but since they're intended for donation to The Warm Hands Network, that's probably a good thing! I don't think there are too many others with feet as long as mine.

I kept the leg on the short side for two reasons. First, the picot hem isn't stretchy so I didn't want to position that too high up the calf. Second, the yarn is mystery yarn from another Raveller's destash and the cake weighed just shy of 90 grams so I didn't want to run short. Looks like I'm going to have a couple grams leftover but not much more than that. So that's awesome too!

The theme for the March KAL in the SolidSocks group is blue, so sometime in the next few days I'll poke through the yarn I've got on hand to see what will work for that. I know for sure I have a gorgeous blue grey skein of Sydney Sock with Nylon from Studio June yarns so that might be my choice. Looks like my YOP list is turning out to be 1 knit along a month with the SolidSocks group. The nice thing is that it's flexible enough to allow me to knit through some stash and work through some of my queued and favourited sock patterns.

It's a holiday Monday here in Ontario Canada and we're enjoying an unseasonably warm sunny day! Hope you're having a good day too!

Posted by Minding My Own Stitches at 2:08 PM 8 comments: 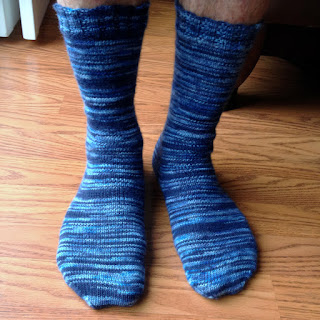 After finishing the first Swirling Ribbons sock I sent photos and comments to the designer then decided against knitting a second. I'll frog and re-use this yarn for another pattern. I'm not happy with the fit and I just can't live with the holes. Que sera, sera. 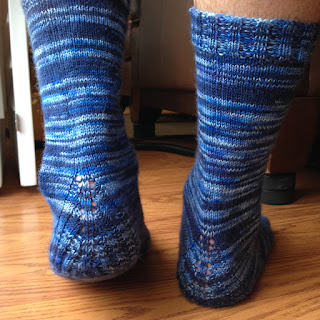 The Strong Heel was introduced in 2003 by knit designer Gerdine Crawford-Strong. Gusset increases are worked on either side of the centre back of the heel, and then when the heel is turned you land back at your primary stitch count without the need to pick up any stitches. It's my favourite of all the non-traditional heel constructions. 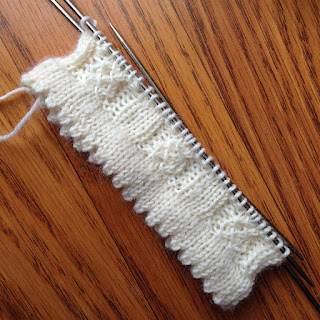 I wish I had read the comments on the project pages before knitting these socks though! I really ought to have twisted the stitches at the increases to close up those holes. Oh well, a couple of washes and wears will probably take care of them!

Other than that, I'm really happy with these socks. I think that this pattern will become my Go-To vanilla sock pattern for stripey colourways! I really like the way it keeps the stripes organized. In fact I think I'll redo Gavin's grey ribbed socks - the ones I frogged a couple of weeks ago because they're too small - this way too!

But first I had to cast on socks for the February KAL in the Solid Socks group on Ravelry. After all, February is a short month and we're almost halfway through it already. The theme this month is black, grey or white. Looking through the destashed yarns I found this mystery white yarn to use. It's so nice to knit light coloured yarn!

I chose "Fascine Braid Socks" for my pattern. It has a nice feminine look without lace or holes. The picot cuff is cute, but what a pain! Almost enough to bring on a case of second sock syndrome! Never mind though, the main leg pattern is super simple and quick to knit!

I did some extensive modifications to the pattern. As written the primary stitch count was 60 sts on 2.75mm needles. This yarn is too thin for that. Instead I've cast on 72 sts and widened the knit columns to 4 stitches wide. Should do the trick!

It's snowing like crazy here - 1 cm an hour from last night for the next day or two. No point in trying to shovel yet; I may as well wait until it stops. In the meantime it's very pretty to look at and perfect weather to curl up in a comfy chair and knit!

Posted by Minding My Own Stitches at 1:50 PM 10 comments: