It's the final post for a Year of Projects 4 and time to admit that I'm nowhere near knitting through the book Knit. Sock. Love. In fact, I've only completed 7 of 19 patterns, with the 8th on the needles now.

And my poor Rhombus socks are not getting much love from me these days.
Why do I avoid them? Let me count the reasons:


Wouldn't you know it the June shipment for the Cookie A sock club has arrived. The club yarn appears to be the same base - kinda thin and bumpy and not very satisfying to knit - and it's almost the same colour. NOOOOOO!!

So where does that leave me? I did finish another pair of Vanilla Bean striped socks with Striped Turtle Toes yarn from Turtle Purl in a colour way called "Rock Paper Scissors". This is more of the yarn that I bought at the Knitter's Frolic in July, and once again I got a deal because the skein set was slightly underweight. I knit to-up this time but still with the afterthought heel to keep the stripes perfect. Truth be told I could have squeezed out another couple of stripes at the top cuffs but I wanted to start and finish with red and I didn't want the natural white colour at the heel.

I LOVE these socks. I've knitted them for the Warm Hands Network so it's unfortunate how perfectly they fit me and how entirely comfy they are. Makes it harder to give them away.

I'm also make rapid progress through Delia eucharis socks by Hunter Hammersen. The pattern is very fancy looking but surprisingly easy and intuitive, although I don't entirely appreciate the fact that Hunter Hammersen needs to have her own special chart symbols. Seriously? Isn't the usual symbol for a knit stitch just an empty square? grumble, grumble, grumble!

The yarn is Alegria by Manos del Uruguay and it is heavenly! Plump, soft, squooshy, AWESOME. I haven't taken a recent photo but I've turned the heel on the second sock so these'll be off the needles sometime this week. These are a gift, and if they weren't intentionally too small for me it'd be a challenge to give these away too!

So what's the plan for the next Year of Projects?

Posted by Minding My Own Stitches at 1:02 PM 8 comments: 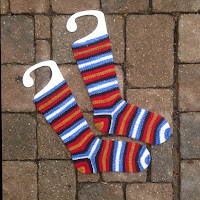 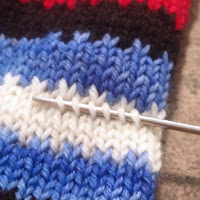 A few weeks ago I mentioned that I planned to do some sock knitting for the Warm Hands Network, and with these Vanilla Bean Striped Socks I've made a start.

In the Vanilla Bean pattern the transitions between colours in self-striping yarns are made a bit more interesting by slipping every other stitch for a round. It's a simple little thing but strangely effective. Other than that the socks are plain stockinette with the knitter's choice of heel.

I chose an afterthought heel - gotta keep those stripes uninterrupted across the instep! At the same time I was thinking that was my best strategy to use every inch of this yarn. I bought it from the sale bin - it had been marked down as a lightweight/short yardage pair of skeins. My thinking was to start with 66 sts, work cuff down, start the toe with six colour stripes left on the skein, leaving myself with three colour stripes for the heel. And that's exactly how it worked - less than a yard left on each skein and a generously sized pair of socks as a result! 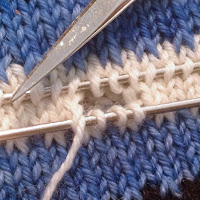 For those not familiar with the afterthought heel, you can read more about it on the Yarn Harlot's blog. You start by knitting tube socks toe-up or cuff-down just as you like. Then you decide where to locate your heel and use the smallest needle you own to pick up stitches for one side of the heel (usually half your total stitch count, and definitely aligned to your toe shaping). Next, pull up a stitch in the row below somewhere near the middle and snip that row open. Finally, pick up the stitches in the row below your snipped stitch and start unravelling the cut row in each direction picking up the bottom stitches. Et voilà, you have an opening to insert your heel! 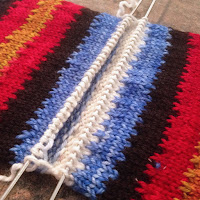 If you haven't done it before it can be a bit scary - especially that cutting your knitting part - but it's much easier to do than to describe. And besides the fact that it creates three more ends to weave in, it works beautifully. It is helpful if your yarn is light coloured, and smooth with good stitch definition so that you can clearly see which loops to pick up. Chances are some of the picked up stitches will wind up backwards on your needles, so be prepared to watch which way they're mounted and be prepared to twist'em back on that first heel round. 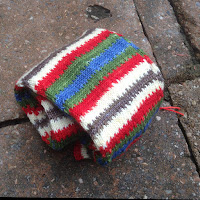 The finished socks are not very complicated or tricky, but they are bright, colourful and fun! So fun in fact that I've already cast on another pair. This time around I'm knitting a colourway called "Rock, Paper, Scissors" and working toe-up. Once again the yarn was plucked from the sale bin, and once again they're lightweight/short yardage skeins. These skeins weren't much short though - at 95 grams I figure there's plenty of yarn to knit a pair on 70 sts this time.

The organizer of the Warm Hands Network is based in Ottawa, so I plan to finish up this second pair before we head to Ottawa next weekend for a family visit. Why not save the shipping costs and drop them off in person, right?

And with that out of the way, and with several hours of car knitting time in my future, maybe I'll have a whack of progress to show you on Rhombus socks next week?!

Posted by Minding My Own Stitches at 4:56 PM 8 comments: 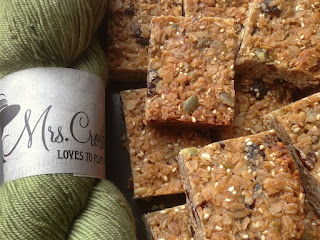 From the absence of posts you might think that I haven't been knitting, but that's not true. I just haven't been blogging. But maybe I'd better get started on a few catch up posts.

The June shipment of Cookie A Sock Club yarn arrived yesterday, so the April club patterns, yarn and cookies are a good place to start. 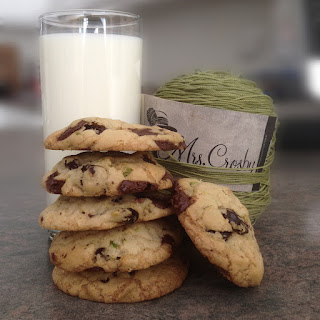 I'm not much of a baker honestly. Very seldom do my baking attempts turn out as I expect. So I wasn't entirely sure that I'd participate much in the baking part of the Cookie A sock club. Six times a year, club members receive a skein of yarn in the mail, and then a Ravelry download that includes two cookie recipes and two sock patterns. Members are encouraged to post FO photos of cookies, club pattern socks, or FOs using the club yarn. Each post made before the next club release qualifies as an entry for prizes.

My first FO for April was a tray of Cranberry Walnut Granola bars - and oh my goodness, they turned out perfectly! There are pumpkin seeds, and sesame seeds, rolled oats, peanut butter, walnuts and craisins in there. Fortunately there's a Bulk Barn just up the street so that I could buy small amounts of the necessary ingredients! I've already made these again, and Gavin has been asking about when I'm planning the next batch. 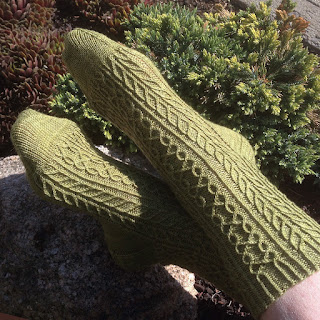 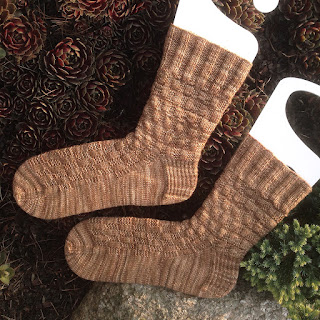 The Club yarn is a high twist merino similar to the Sokkuso base (maybe it IS the Sokkuso base?). It was dyed "Manzanillo" green by Mrs Crosby in Chicago - not really my colour as there's more yellow in this green than I'm comfortable with. The twist certainly gives it great stitch definition, but I'm still not comfortable with sock yarn that has no nylon content. With the club yarn I knit one of the two Club patterns - Agave Socks. In the pattern as written the instep motif tapers to a "V" on the top of the foot, however alternate instep instructions were provided to continue the pattern to the toe. That's the route I went. The pattern involves a lot of twisted stitches, but it knits up surprisingly fast and was quite intuitive. Easy enough to knit on my commute. One thing though - it eats yarn. I barely squeaked out this pair from the 433 yards of yarn in the skein.

I knit the second club pattern - Xeriscape Socks - from Twisted by Studio June in a colourway called "Coffee and Cream". Seems to me the club patterns are like those old 45rpm records we used to buy - an "A" side and a "B" side. In the case of the patterns, seems like there's one fancy pattern and one vanilla pattern. Xeriscape Socks are super simple - not much more than a basketweave pattern of knits and purls. It's a nice enough sock, but it's not a pattern I would have purchased. Let's put those on the gift pile.

The June patterns and recipes packet won't be released for another week or so - that should give me enough time to catch up on some other socks on needles. Hopefully my next blog is just a few days away instead of weeks!
Posted by Minding My Own Stitches at 7:20 AM 4 comments: