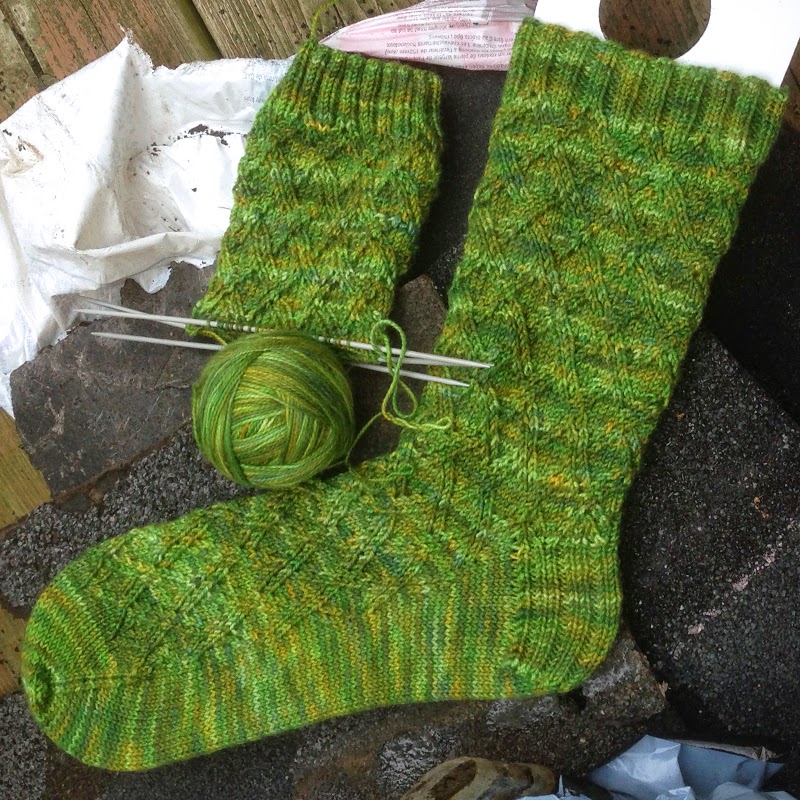 Four weeks later and I'm not much further ahead with the second Farmer McGregor sock. I did cast on sock two, and I did knit all the way to the top of the heel flap, and it was then that I realized I'd made the second sock at a larger size. Seriously?! There was no chance I'd have enough yarn for that. 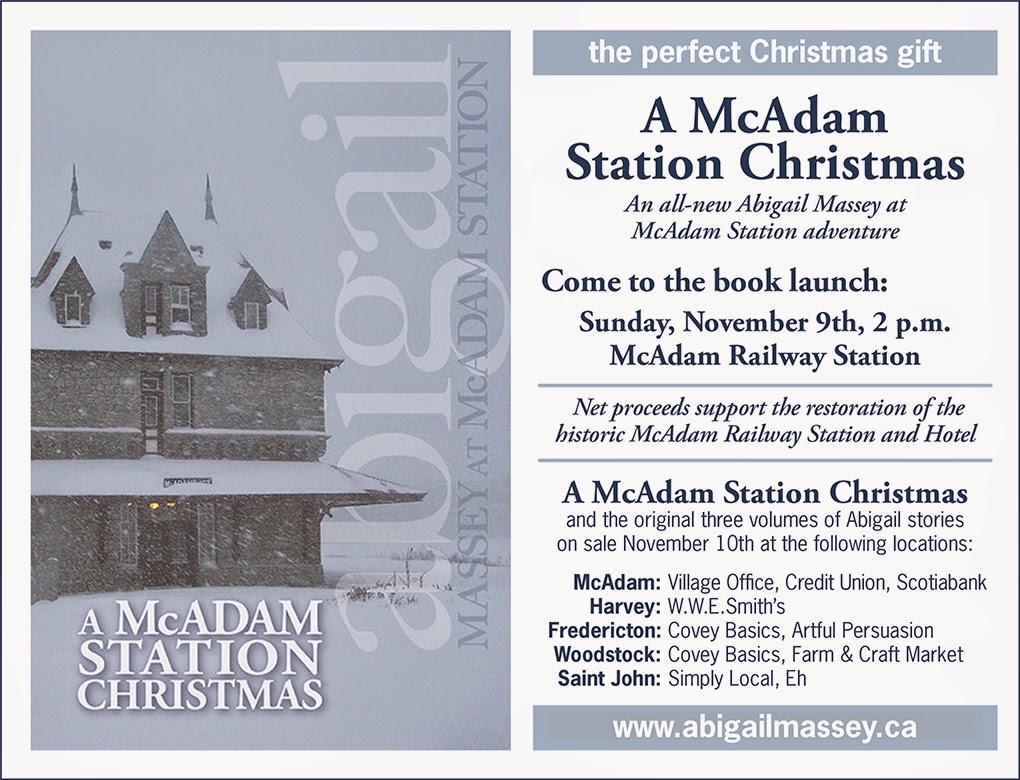 It took a few days for me to build up the courage to rip out the entire leg of sock two and start again at the correct size. After re-knitting the cuff and the first few pattern rounds, sock two languished for weeks. As well as a ridiculously busy spell at work, my remaining waking hours have been spent getting the softcover version of my brother's novella "A McAdam Station Christmas" printed and delivered, not to mention designing, typesetting, formatting and finalizing a hardcover book "McAdam Railway Station and Hotel: Fact, Fiction & Photographs" for printing release and sale before Christmas. Car trouble, a flu bug and roofers have only added to the craziness. 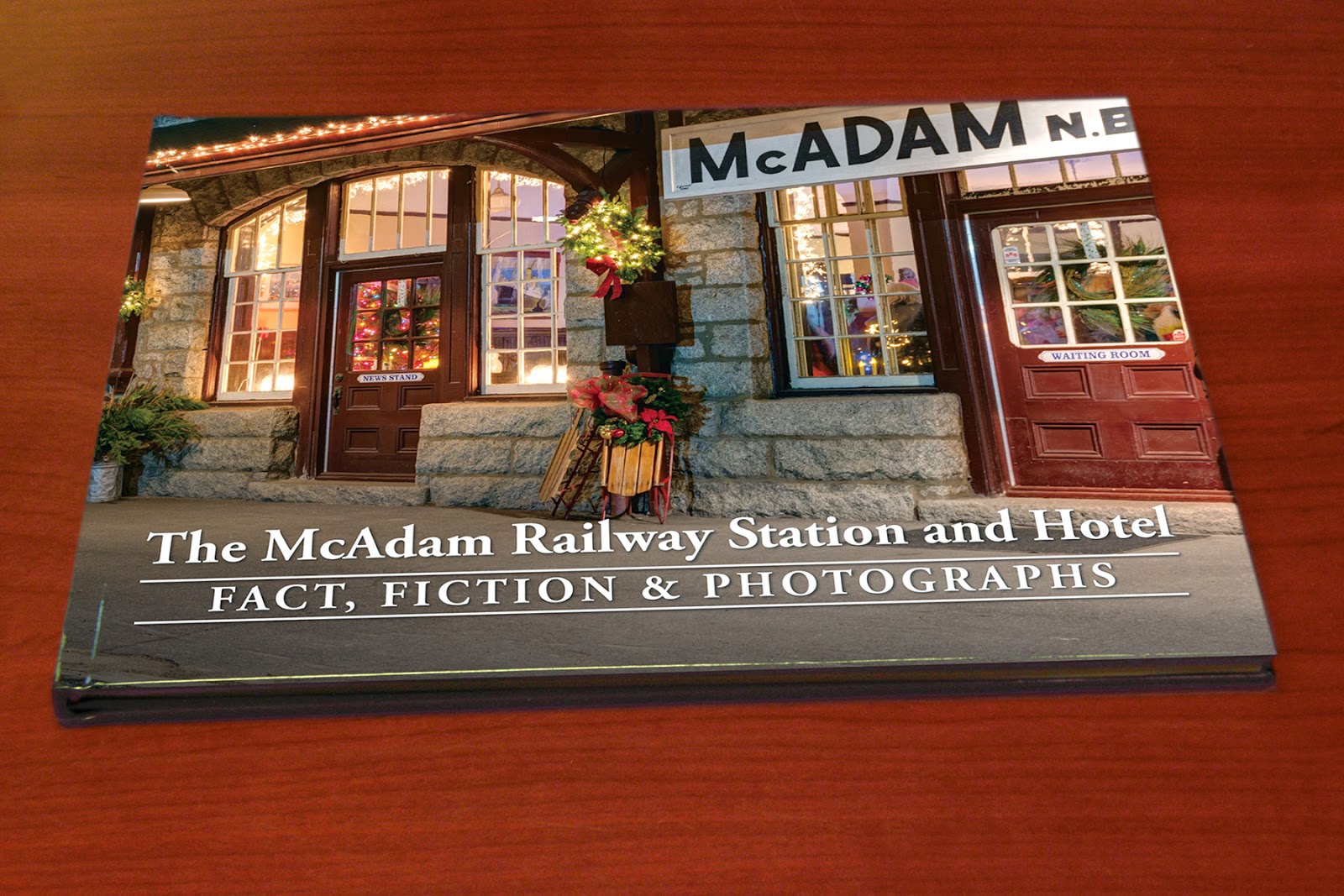 Happily, the softcover book was delivered in New Brunswick last week - just days ahead of the pre-launch and launch events. And I uploaded final files for the hardcover book to the printer at the end of last week. Early this week I'll have eProofs to review and then hopefully we can get the books printed and delivered by the end of November. Fingers crossed that sales are strong and lots of money is raised for the restoration of this amazing landmark! 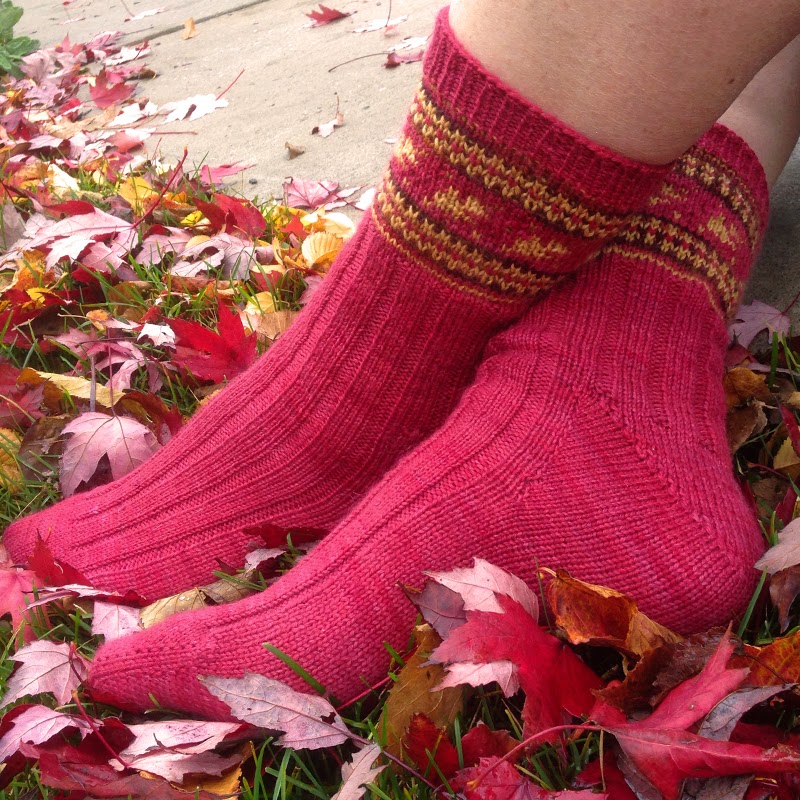 Car trouble meant commuting back and forth to work on transit - the perfect opportunity for some mindless knitting. For the Seasonal Sock Syndrome KAL hosted by Revelations of a Delusional Knitter, I settled on a pattern called "October Leaves". It's a simple toe-up ribbed sock with a colourwork band at the top of the leg. A ribbed sock was about all my exploding head could manage. As written there was also a colourwork section to begin the foot, which I skipped, and the colourwork was meant to be four colours not three, but I shortcut that too. The socks turned out beautifully, and are super comfortable, so that's another thing on my to-do list accomplished.

Oh, and the car? I had shut off the engine in the line-up at the Costco Gas Bar, but when the line ahead of me started to move, the car wouldn't start. You can just imagine how patient the drivers in line behind me were!! The lot boys helped to push the car to the parking lot. It was Sunday morning of a holiday weekend, so there was no chance of finding a dealership or auto mechanic to look at the car. My step-son-in-law and my step-daughter tried jump starting the car, but determined that it wasn't the battery, but probably the alternator, or more likely the starter motor. It's a standard transmission so we push-started the car so that I could drive home. We push-started it once more so that Gavin could take it up to the garage on the following Tuesday, and left it with the mechanics for most of the day. By late afternoon they found a frayed ground wire that was causing the trouble. Not a mechanical problem at all! Isn't that the thing with all the electronics in today's cars? Always something to go wrong! Oh well, that was the cheapest thing, so I'll count myself lucky.

Here's hoping that things are back on track now! With luck - and providing the rain holds off - the roofers should finish our row of townhouses next week. Gavin works nights, so he's quite sleep deprived with all the hammering and banging through the day. I'd better run to do some grocery shopping and some laundry. It's my BIL's birthday this week, so we're hoping to catch up with him later today for a bit of a celebration. One way or another I'd better find time to finish these Farmer McGregor socks! The KAL ends on Friday - this is the last pattern of the entire book, and I'd hate to blow it now!