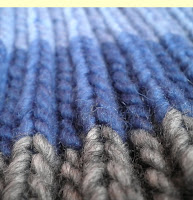 I had a nice lunch with Jane yesterday, albeit a bit rushed. Wouldn't you know it - work's been quiet for weeks and then suddenly on the day I schedule a lunch things go completely crazy!?! I felt like I was competing in that old TV game show Beat the Clock and losing badly.

Feeling somewhat defeated and exhausted, a striped hat was about all I had the energy for last night. Something simple to work away at while taking in the second game of the NHL Western Conference final on TV. It's a testament to the fast pace of the game how much I accomplished. Do you find that? I knit faster as the pace of the game picks up. Prior to the last couple of games I wasn't much of a Canucks fan, but the team has been incredibly entertaining lately. They really could win it all!
Posted by Minding My Own Stitches at 9:10 AM