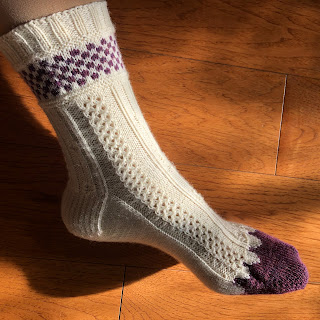 That's the first sock done; the second sock is underway. What a lovely sock! Did I mention how much I'm enjoying this pattern? I just adore that column of stitches - it's cleverly made by pulling stitches over each other so there's no cabling and it's very quick and easy to work.

I'm sure you've realized that I'm generally in favour of lengthening sock legs until they are at least as long as the foot, if not a touch longer. I just think the sock looks better proportioned that way. But in this case I didn't want to do anything to move that tile pattern up the leg. It's not stretchy enough to move up onto the wider part of my calf. I settled for making the ribbed cuff about 25% longer than directed. I think it balances nicely with the length of the colourwork below.

It looks like I will have time to finish this pair before the Musselburgh KAL gets underway on September 1st. Happy crafting everyone! If you'd like to join our Year of Projects group, look for us here on Ravelry.

Posted by Minding My Own Stitches at 8:20 AM

That is a really cute pattern. I especially love the pattern at the toes. Thanks for sharing.

That is a very cute pattern. What a great way to make 'cables'. You make so many pairs of socks. Are they all for you? How many pairs of handmade socks do you have?