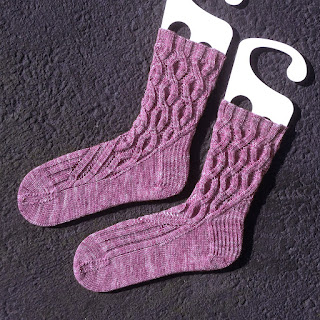 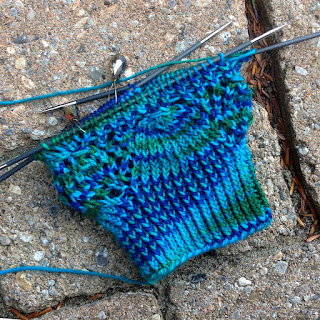 As it turns out, these In and Out socks were a super quick knit! Seems like I had barely cast on before sock one was off the needles, and sock two wasn't far behind. Of course, with nothing else on the needles I knit them monogamously, so that surely helped. And I was motivated to finish them before I saw my sister this weekend - so that she could deliver them and save me the postage.

Once again the legs are a bit shorter than I'd like, but this time I did remember to lengthen the cuff. Going forward I'm really going to have to give some thought to adding a vertical repeat to the legs of Cookie A patterns to make the final sock proportions more to my liking. Maybe the designer's feet are tiny compared to mine and the proportions suit her rather than me?

One detail that I really like is the way the heel pattern starts at the center back of the leg and then spreads out and down the heel. No abrupt end to the leg pattern at the start of a heel flap. Nice!

So what's next? I was trying to decide when I saw these Clandestine socks amongst the project pages on Ravelry. Wow, look how nicely the variegation distributes itself in the shell patterns of this pattern. It looks very fluid and interesting! And don't I just happen to have some variegated yarn caked up and ready to knit?! So Clandestine jumped the queue and hit the needles. I'm almost twice as far along as the photo shows and thoroughly enjoying it. Can't wait to show you more of them next week!!

Posted by Minding My Own Stitches at 8:09 AM 6 comments: 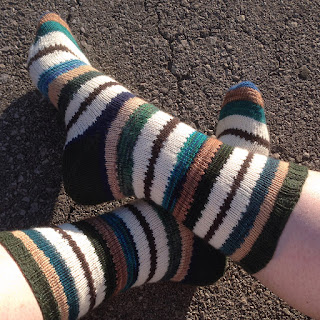 Modifications: Worked toe up, increasing to 68 sts with afterthought heel, with eight rounds per colour joined with Russian Joins.

Comments: Yup, still another pair of scrappy striped socks, this time in cooler shades of blue, green and brown. As before I striped in generous amounts of white yarn just to tie all the stripes together. As it worked out, the afterthought heel landed in one of the darker shades of splitty yarn which was a bit unfortunate. I really ought to plan these things a little better!

Posted by Minding My Own Stitches at 8:52 AM 5 comments: 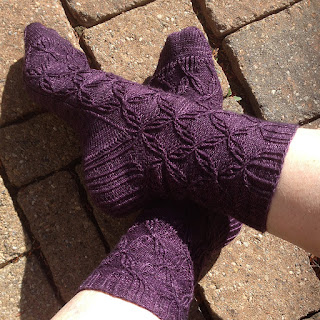 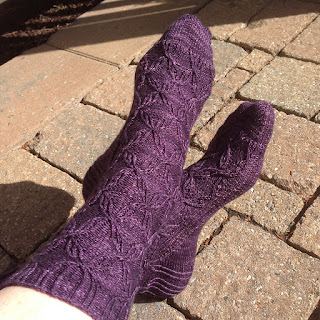 Ahhh, Rhombus sock are finally done. Did you realize that these had been on my needles since May? Geez! That must be some kind of a record. Well never mind that, these socks are worth the wait!

The pattern is not terribly stretchy so I purposely knit the leg as written without adding any repeats but now that the socks are done, I'm not entirely happy with shorty legs. If I were to knit them again I'd make the ribbed cuff at least twice as deep.

It's quite an involved pattern. The six stitch cables are hard work and by the end of the sock I was pretty adept at interpreting every different type of M1 stitch from the chart without reference to stitch legends.

The yarn is Basic Sock from Red Sock Blue Sock. I didn't love the knitting of it - it's not very smooth and not soft and somewhat splitty- but I definitely like the feel of it on my feet. It's also a very nice weight. Not so thin as to yield flimsy knitted fabric. Not so thick as to yield bulky socks. Perfect, in fact, to knit socks on size 0 (2mm) needles. I really like this purple colour but I find the dye job a bit streaky with some almost undyed blotches. Hmmm. I wonder if a nice soak won't be the cure for what ails these socks? Remind me to update my opinion on this yarn next week!

Although fall doesn't officially arrive until midweek, Mother Nature has jumped the gun around here. It was down to single digits last night. Almost noon now and the temperature has only climbed to 15°. It's sunny though, and perfect sock-wearing weather. It's possible these Rhombus socks might stay put on my feet until bedtime!

Posted by Minding My Own Stitches at 11:03 AM 9 comments: 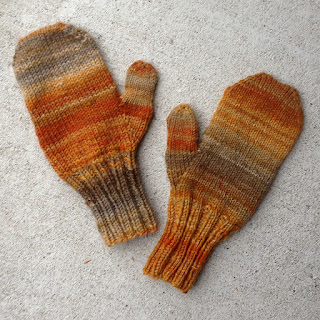 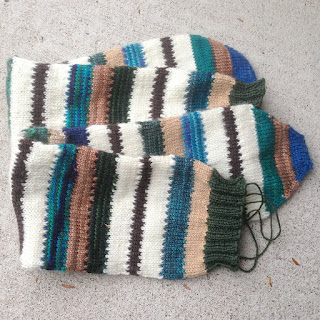 There's been some progress on my second Rhombus sock but things were just too busy at work and at home to spend much time with it. It's definitely going faster than sock one, but I still need to pay attention to the chart and I just haven't had a chance. Instead I've done a few other things. 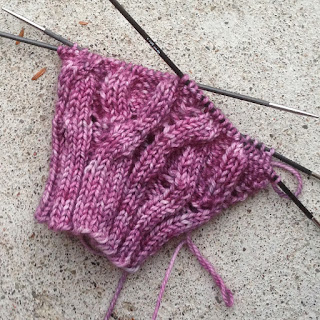 A couple of weeks ago a fellow Raveler gifted me with some of her handspun - 67 grams (approximately 100 yards) of thick/thin worsted weight yarn. After a quick search of the pattern database I decided a pair of children's mittens was my best choice to use every inch of her gorgeous yarn. I made a pair of Children's Basic Mitts by Elizabeth Durand in the largest size. Instead of a rounded top I switched to decreases at each side for more of a wedge shape with a grafted top - just like a sock toe. The sizing worked out perfectly; I finished with scant inches of yarn left over!

In my mindless and interrupted knitting time I worked away at my September vanilla socks - using scraps and Russian joins, roughly following the Vanilla Bean Striped Socks pattern working toe up with an afterthought heel. This morning I finished the second sock tube, so just the heels are left to do.  The Warm Hands Network has a shipment planned for September 30th, so I'm motivated to finish these up quickly to send them off in time.

This time last week we were sweltering in 34° C weather and heat warnings. Fast forward a week - the high today was 14° C. That's a pretty crazy swing in temperatures! The weather's supposed to swing back to summer again towards the middle of the week - but in the meantime it's sock knitting weather! No wonder there's lots getting done around here lately! 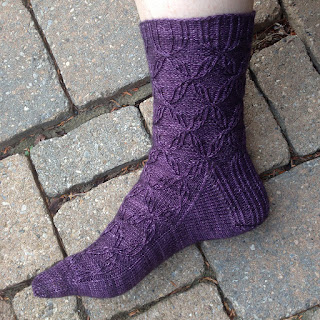 Now that I'm caught up on all the other knitting fronts, it's finally time to get back to Rhombus. Sock one was cast on at the beginning of May (!) and has been languishing on the needles ever since. Time to get 'em done.

The pattern includes every kind of lifted increase imaginable - M1L, M1R, M1L-Purl and M1R-Purl. To get through the first couple of repeats on the leg I typed out a little cheat sheet for myself; that really helped. Then all of a sudden as I approached the heel I realized that I could look at the chart symbol and know how to work the stitch without referring to cheat sheet. BREAKTHROUGH! Now the knitting speeds along. Sock one is done, and I'm halfway down the leg of sock two. I expect the pair will be finished by the end of the week, or mostly finished anyway.

After taking the photo I was struck by how similar the pattern is to Esther by Stephanie van der Linden. I made those in the spring of 2010, except that in Esther the increases are all made with YOs resulting in a lacier sock. Comparing them side-by-side I prefer the Rhombus sock with its lifted increases, although the fabric is less stretchy so you wouldn't want to make the leg much longer.

While knitting sock two of Rhombus I've been flipping through Knit. Sock. Love. to decide what to cast on next. The forerunner right now is In and Out. I have a softly variegated purplish-pink yarn that might work for this. I hope it does work because this yarn/pattern combination would be perfect for a pair that's been promised to my sister's friend.


Posted by Minding My Own Stitches at 8:04 AM 9 comments: 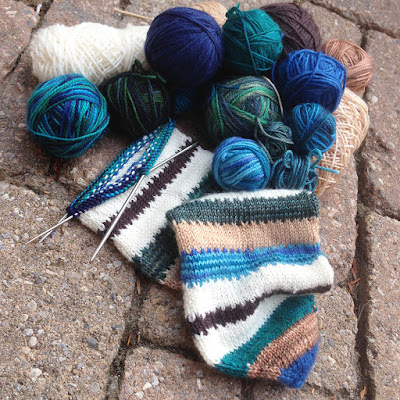 While selecting the yarn scraps for these socks, and while casting on and working the toe I thought I was starting a pair of scrappy striped socks for Gavin... but soon enough he made it clear that these were not the socks he was envisioning. In his imagination the blue scrappy socks were ONLY blue - no white, no beige, no brown, no green.

*sigh* Looks like these will be my September Vanilla Socks for Charity instead.

Posted by Minding My Own Stitches at 8:07 AM 4 comments: