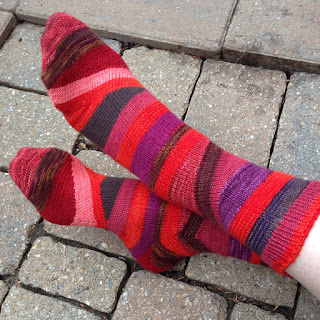 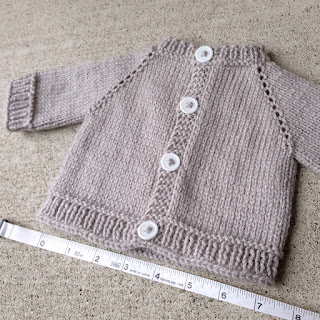 In the end I decided to be matchy-matchy in the yarn sequence for my scrappy Mystik Spiral socks. The first sock was so busy looking that I didn't want to add any more busy-ness. As well, I thought that matching the stripes would help make the mirrored spirals more dramatic. I'm happy with the way they turned out!

I can highly recommend the pattern, though it'd be better in self-striping yarn than from scraps. Although I love the socks on my feet, my scraps didn't knit to a very consistent gauge and as a  result the socks look lumpy and uneven when not on my feet. These are headed to my sock drawer rather than charity as I'm not entirely happy with them. 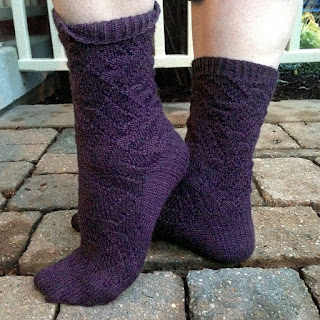 Late last week my cousin shared a Facebook post wherein the Diana Princess of Wales Hospital in Grimsby, England asked for hand knit cardigans for the preemies in their neonatal ward. Grimsby is her husband's hometown and he's headed their to visit his mum in a few weeks. After poking around on Revelry for a suitable pattern I settle on this one. Goodness it knits up quickly! Looks like I'll have several ready for him before he boards that flight! And just look how cute it is ... although it's a bit worrying that something that tiny would actually fit a child!

As mentioned the October patterns for the Cookie A sock club were released, and thank goodness, neither of them were bed socks. The designer admits that the luxury yarn wasn't likely to make durable socks, so with that I posted the yarn for sale within the group and sold it within minutes. At least I recouped a small portion of my investment!

I cast on and knit a pair of socks roughly based on one of the club patterns - "All Shook Up". As written the sock features a false seam down the back of the sock and the leg patterning tapers off to a V at the top of the instep. Instead I opted to knit the pattern seamlessly around the leg and continue the pattern to the top of the heel flap and across the instep to the beginning of the toe. It's a very simple pattern of knits and purls. Nice enough, but it wouldn't have been a pattern I'd choose to purchase and knit.

The other October pattern for the Cookie A sock club is "Love Me Tender" which is another simple pattern, this time with columns of cables and lace. I've picked out a light turquoise yarn for this and have knit most of the first leg... but more on that next week! And hopefully Clandestine sock two will get some love too! 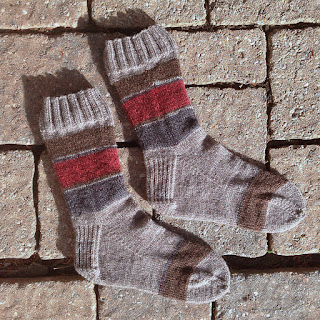 Wait... what? Where'd that pair of Vanilla Socks come from?! 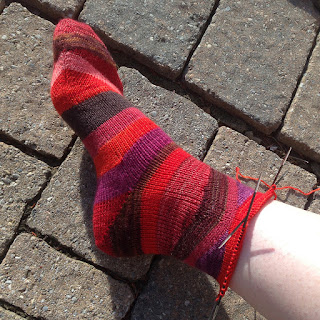 Well ..... the other day I was designing a custom t-shirt for my brother-in-law and discussing with Gavin the size of the blank t-shirt I should buy. Gavin inspected the design, decided he wanted one too, so he said I should buy TWO blank t-shirts, size large.

No, I responded, I have a 50% off coupon for ONE regularly priced item; I will be buying ONE t-shirt.

However, at Michael's I find that the t-shirts are BOGO, so two t-shirts it is, but what to do with the 50% off coupon? 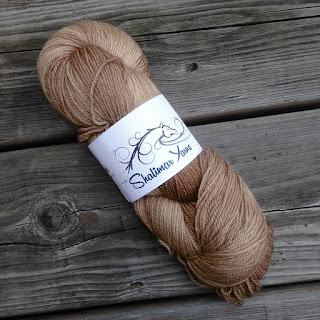 A few minutes later, I'm in the sock yarn aisle with a ball of Kroy Grey-Brown Marl (166 yds) in my hand imagining it paired with a single orphan ball of Kroy 4ply (203 yds) in my stash to make a single pair of socks.

And voilà, a pair of somewhat striped vanilla socks were the result... as well as a t-shirt for my brother-in-law and a matching t-shirt for Gavin. Win, win, win.

Aside from those vanilla socks, I've also made a bit of progress on Mystik Spiral Socks. Sock one is almost done. If I follow the pattern as written it's half a dozen more rounds on the leg and then a cuff. Hmmm, won't that be a bit short? Right now I'm thinking about making the leg a stripe or two longer and then making the cuff a bit deeper than written. The colour scheme of these socks is pretty crazy, but I'm kinda loving the result. For my next pair - and I'm pretty sure there will be a next pair - I think I'll reel off smaller balls of scraps for narrower stripes. I think the spiralling will look even crazier with more stripes.

Clandestine Sock Two has been largely ignored. Maybe next week? Probably next week! I'm house-sitting for my sister from Tuesday to Thursday, and likely commuting back and forth to work on transit, so I expect to have lots of time to knit.

The club patterns come out tomorrow. I have a terrible nagging fear that the pattern will be for bed socks. Fingers crossed that I'm wrong.
Posted by Minding My Own Stitches at 11:05 AM 11 comments: 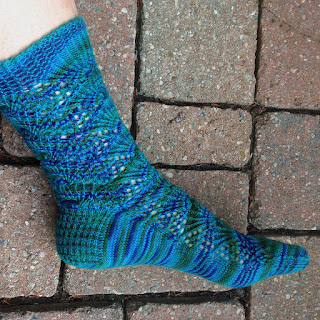 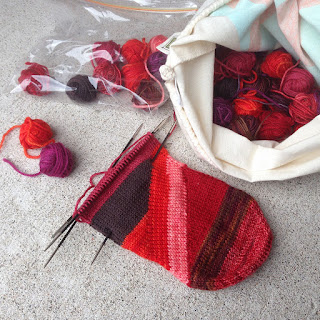 I haven't taken a recent photo for Clandestine, but I did pause for a photo after completing sock one. The sock is intentionally snug on my foot as the pair is intended for someone with smaller feet and skinnier legs than me. But it's a lovely sock and the yarn looks quite showy and peacock-like. Fun!

Sock two is on the needles. It's going to be a bit of a slower go, I think, as I have to reverse the charts to mirror the foot for the right sock. I might have to make photocopies to cut and paste the charts into the new order to get it right. Too much of my knitting time is distracted - it's an error waiting to happen if I don't take steps now.

And it seems like everywhere I look on Ravelry and in the blogosphere I see Mystik Spiral Socks, so I just had to buy the pattern to cast on a pair for my October charity sock. The pattern is written for self-striping yarn, and I did look online at a couple of suppliers to see if there was a stripe pattern that caught my eye, but in the end I've decided to create the stripes from scrap yarn.

With spirals created from short rows I wasn't confident that I'd know where to switch colours, so I've reeled off mini-balls from various scrap yarns, each about 4.5 yards for nicely even 8-9 round stripes. As I knit one mini-ball I put a matching mini-ball in a ziploc to set aside for sock two. Sock two might be matchy-matchy, but maybe not... I'm making this all up as I go along.

It's a pretty fun knit and a nice change from the Vanilla Bean Striped Socks that I've knit for the last few months. I'm already poking around in my sock yarn leftovers to plan the colour scheme for the next pair. The Warm Hands Network has their next shipment planned for January to a school in Kugluktuk which is on the shores of the Arctic Ocean - socks for school age kids are the highest priority!