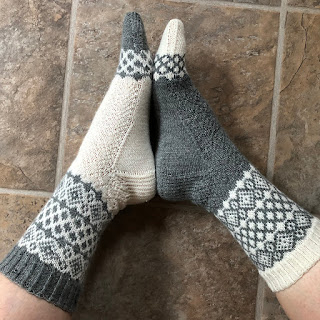 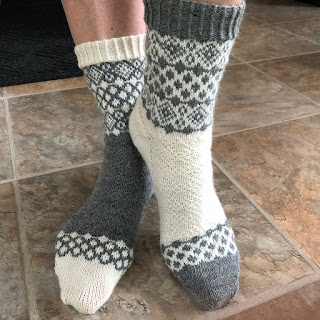 I've been a bad blogger... 10 weeks since I last posted an update on my Year of Projects and about six weeks since I blogged anything at all. May and June got entirely away from me! Things were so hectic that very little knitting gone done either. In light of that I really had to think about whether it made sense to rejoin the Year of Projects group for Year 8. I've even been considering giving up blogging altogether.

After thinking it through over the last few days I'm hopeful that the crazy busy-ness is behind me and that I might be able to relax and catch up on things a bit over the coming weeks. So I'm going to keep on with both - Year of Projects 8 and my blog - and see how it goes.

My seventh Year of Projects wraps up with this post. Despite sporadic absences I was able to work through the majority of my plans. This past year has seen a variety of socks knit and almost no yarn purchases whatsoever. I'm quite pleased with that. Expect more of the same for next year. It'll be all about knitting from stash! In that vein the unfinished projects will likely be rolled over onto the new list as I have yarn for them.

Here's one last finish for the year: Alfrick Socks by Rachel Cooper knit in Sandes Garn Sisu Solids in Grey Heather and White. In fact, I ran out of yarn several rounds before starting the colourwork band at the toe, so there's also some Kroy in Gentry Grey and Sydney Sock with Nylon in natural. I'm quite impressed at how well matched those colours were. I can't even see where the Kroy starts!
I pretty much knit the pattern as written, except that I started with the largest size - 84 sts on 2.25 mm needles - until the end of the colourwork chart on the leg, then decreased to the smaller size - 72st on 2.25mm needles - for the rest of the sock. I'm really happy with the fit as a result. I don't like it when the cuffs are too tight!
The pattern is really well written and the pattern photos are gorgeous. I've been infatuated with this pattern from the day it was released and I'm super thrilled with my finished socks. The only think I struggled with momentarily was the heel chart which begins with a wrong-side row. I had to rip back once and redo it to get the pattern established correctly.
At this very moment I don't have a single WIP. I guess I'd better figure out what to cast on next!

Posted by Minding My Own Stitches at 6:45 PM 10 comments: