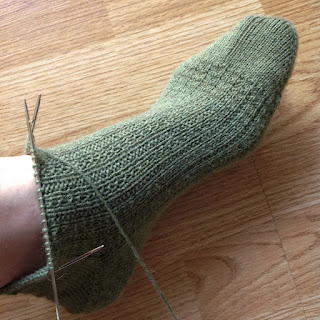 So yesterday was moving day, leaving me surrounded by totes and furniture in the wrong rooms. It's taken most of the day to get the two bedrooms and the living room sorted out (mostly). And finally there's a clear path to my computer so I can write a post!

Still it's nice to have all our stuff here. And it's nice to finally have a proper living room. Over the next few weeks we'll have to cull our excess stuff - we have waaaaay too much stuff - and find homes for this and that.

With all that's been going on I haven't had much time to knit. My first Petty Harbour sock is just past the heel. So clearly these won't be done in time to enter the June KAL on the SolidSock Group on Ravelry!

We did see the birthday boy last week, but, wouldn't you know it, I forgot to bring along the Syncopation socks that I just finished for him. He sounds excited to have the socks. Years ago I knit a pair of socks for his wife, and he told me he keeps stealing them from her sock drawer as they're the only things that keep his feet warm without sweating. I think that makes him knit-worthy, so I think I'll plan a pair for him and a pair for his wife for Christmas. It was certainly nice to hear that my hand knit socks are appreciated.

Speaking of plans, I need to spend the upcoming week putting in some hard though about how to construct my list for the seventh Year of Projects. It's hard to know how to plan, as I don't really know what the upcoming year is going to look like for me. On the other hand, the more concrete and specific the list, the more rigorously I follow it. Hmmmmmm.

Gavin is pacing behind me - we've been invited out for dinner - so I'd better stop here. I hope everyone is having a great week!
Posted by Minding My Own Stitches at 5:04 PM 8 comments: 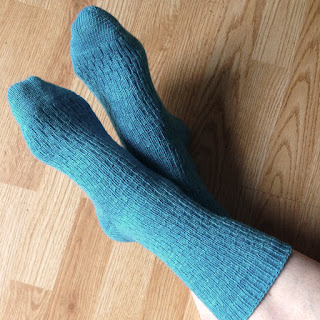 The moving truck has been booked for next Saturday. At this point almost everything has been moved to Lake Erie; we're just living without our large furniture! It sure will be nice to have a rug in the living room, along with a couch, ottomans and recliners. At the moment we're living on patio furniture with a bare floor! Takes me back to my student days :) 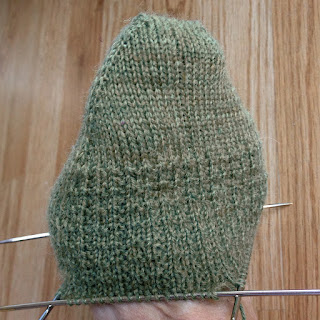 Both "Syncopation Socks" are done. It's a lovely, super simple free pattern which I highly recommend. It's easy to read your knitting to keep track of where you are, so you really don't need to reference the pattern much at all. And the resulting knitted fabric has an interesting sinuous look to it which makes it very attractive. Because the pattern is sort of ribbed, the finished sock is stretchy and fits well. Nice! I hope the birthday boy likes them!

Immediately after finishing them I cast on another vanilla-ish sock - Petty Harbour Socks - for my brother who is apparently in desperate need of more handknit socks. The yarn is a non-wool bamboo blend sock yarn - SRK On Your Toes Bamboo - that was given to me some time ago. The Warm Hands Network prefers socks with 75% wool content, so this yarn was no good for them. I think my brother will like it though. It's a very inoffensive khaki colour. And if I happen to finish these socks in June, they would qualify for the June "Green" KAL in the SolidSocks group on Ravelry. That might be overly optimistic though!

Thanks one and all for your kind comments about my Etsy shop. Response to the Canada Day bags has continued to be strong, so now I'd better plan so more designs to feature once Canada Day is past. I have a few fun ideas :)

Now that we're downsizing into a smaller home I thought I'd better start a yarn diet and knit through much of the stash that I've moved to Lake Erie. Of course, that was before I dropped in at Creative Yarns in Scarborough. They are moving - the bakery next door wants to expand into their space - so much of the yarn was on sale. I picked up several 50gr skeins of Shelridge Farms 80/20 merino/nylon in solid colours. There are several colourwork sock patterns in my queue, and maybe I'll get to some of them in the next year of projects!

Just two weeks left in Year 6 of A Year of Projects. If you're interested in joining the group, then please check us out on Ravelry. The idea is that you make a tentative plan for your knitting for the upcoming year, and then work through that list and blog your progress on Sundays. Your list can be detailed (or not) and there are no knitting police. My tentative plan last year was to knit a pair of socks for charity every month and check out more intricate sock patterns from a variety of designers. I'd pretty much give myself a C- or a D on my performance last year. I did better when my lists were more structured - like knit every pattern in a pattern book. So that's food for thought for next year's list.

Posted by Minding My Own Stitches at 9:18 AM 10 comments: 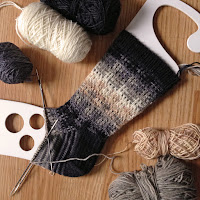 What a bad blogger I've been! It's been a struggle through the last several weeks of moving back and forth. Seems like most Sundays were finding me somewhere without access to a computer and/or internet. I tried blogging from my tablet but couldn't get the pictures to upload. *sigh*

All that being said, I think the worst is behind me. These days we're in Selkirk at Lake Erie pretty much full time with all our gear. We still need to move a couple of totes of small stuff and then the large stuff by moving van from Toronto before the house sale closing at the end of June. 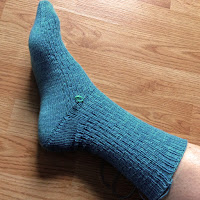 Still, there has been knitting. I did cast on Somewhere Socks in a variety of neutral coloured sock yarn scraps. So far I'm loving them! The colourwork pattern is achieved with slipped stitches rather than stranding which really snugs up the pattern so be warned - cast on a larger size than you think! And all those colour changes will leave me with a ton of ends to weave in but I think this sock is so fun that it's worth it! Knitting this pattern is completely satisfying my urge for colourwork. And don't you find colourwork addictive? I'll be thinking of putting my knitting down and then I think, wait, let's see how the next colour looks.... and then the next, and the next. 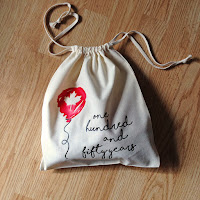 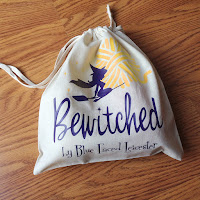 Those socks were interrupted by a special request from Gavin's best friend who asked for a pair of hand knit socks in my choice of a masculine pattern in "KLM blue". I was lucky to find this light blue yarn on sale at Studio June's Etsy shop and decided on "Syncopation Socks" - a pattern that's been in my faves for quite a while. It's a free pattern and super simple that knits up to quite an attractive effect. I highly recommend it. I need to get a move on with sock two, as these will already be late for the actual birthday. Not that the birthday boy would know as he's been travelling out of the country for the last few weeks and we won't likely see him for another ten days at least.

Speaking of Etsy, I opened my very own Etsy shop quite some time ago but never really had much time to devote to it until now. I've started adding project bags, particularly bags in celebration of Canada's upcoming 150th birthday. As well I started running an ad on Ravelry in some of the Canadian knitting groups. The response has been overwhelming! I'm thrilled to see things start to take off and hope to devote a lot more time to it. At the moment I only ship to Canada, however, if you really want something let me know through an Etsy conversation and I'll ship it anywhere in the world. And if you want something specially designed for you or you group I can do that too. /end shameless self promotion

So that's it for me this week. In the coming days my focus will be on completing the Syncopation Socks in time for our next meeting with the birthday boy. Gavin is surfing world class waves in Costa Rica next week, so I'll have lots of quiet time to knit!
Posted by Minding My Own Stitches at 10:03 AM 10 comments: