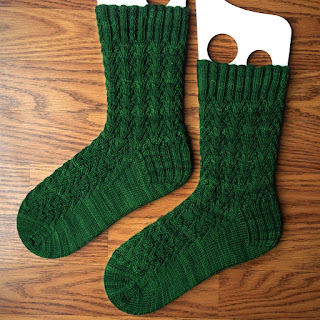 Just a quick post because I've got to hit the road in less than 15 minutes.

First things first. My Vallisneria socks are done. They are gorgeous but here's a word of caution. I added two full repeats to bring the stitch count to 80 but the socks are still very small - maybe a ladies size 5? And the finished pair weighs 92 grams, so it's very very yarn hungry. As noted in a previous post I made a number of modifications to the pattern, all intended to make the sock more flexible and improve the ease however the finished sock is still small and snug. Hmmm. 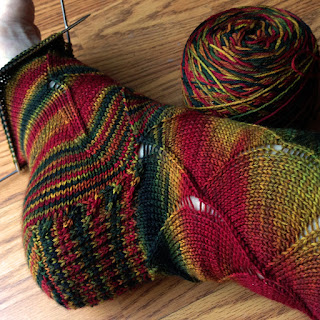 If I make these again for myself I'd better have a lot of yardage available!! But that's not a problem today as the yarn was donated for charity use, so this finished pair is headed for The Warm Hands Network. There are lots of cold feet in Nunavut so they'll find a good home. And it should also be noted that by finishing yesterday I just squeaked in under the deadline to finish for the January KAL in the Solid Sock Group on Ravelry.

Meanwhile I'm also progressing with the Sneak Peak of the Swirling Ribbon socks. The more I knit, the less I like the socks. It's those dratted holes. I generally don't like yarn overs and eyelets in socks and these are no exception. Also, although the pattern is interesting and dramatic, the knitted fabric is not flat so I'm not terribly happy with the fit. They are a bit baggy in spots and pulled too tight in others. Oh dear. I'll finish sock one to meet my commitment to the designer but then I think I'll frog and knit something else with this yarn.

Just another reminder as to why I shouldn't sign up for mystery pattern KALs.

The past week was a mess. Our cat suddenly developed acute pancreatitis and immediately stopped eating and drinking. We rushed her to the vet where they did bloodwork, an ultrasound, injected antibiotics to curb her fever, injected fluids to reverse her dehydration and then sent her home with us with instructions to force feed her Urgent Care diet with a syringe every two hours, as well as narcotics for pain and another drug to stimulate her appetite. What ensued was a few sleepless days of cat torture and uncertainty. Fortunately yesterday afternoon she recovered quite miraculously and started eating on her own. Today she seems "right as rain". Now I just need to catch up on my sleep! 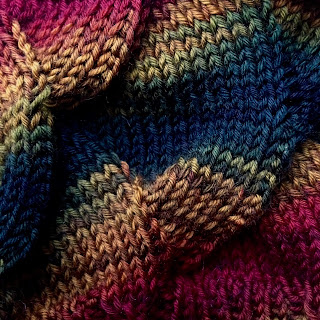 Although the second of my Vallisneria Socks is well underway, there's still most of the foot to knit so I'll hold off on more photos until next week. They should be done by then!

In the mean time I've made a bit of progress on other fronts...

I took a good long hard look at the MKAL socks that I had on the needles and decided to frog. I didn't like the toe, I didn't love the instep pattern, I didn't like the wide columns of purls on each side of the instep, and when Clue 3 showed that the width of the purl columns would be doubled up the leg, I cried "uncle" and frogged. I couldn't bring myself to go any further with them. That yarn can be put to better use. 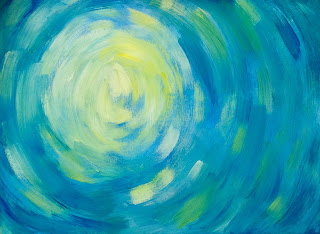 I impulsively signed up for a sneak peak/test knit of another sock pattern on Ravelry. The pattern is named "Swirling Ribbons" and will be released on Ravelry next month. It's quite similar to a number of other patterns I've knit, including Pomatamus Socks and Tidal Wave Socks. It knits up pretty quickly with nary a cable stitch or knit through the back loop in sight! The designer suggested that the "dancing" stitch pattern would work well with high contrast yarns, so I dug through the stash to find this very loud yarn. It looks pretty fun, huh?

The plan for this week is to finish my Vallisneria Socks and at least the first of my Swirling Ribbon Socks. Time permitting I'll try to get Gavin's socks back on the needles. And, of course, painting workshop class two. Class one was sooooo fun! In the first class the instructor asked us to create as many tints and shades as we could from two colours plus white and black. I chose to mix blue and yellow. Then she asked us to zero in on the mixture of colours that most appealed to us and fill a canvas with that. My choice was an aqua green blue. And finally she gave us the subject matter "sun or sunlight" and asked us to create some representation of that within our chosen colour scheme. My painting is intended to suggest a view of the sun from under water. The entire painting was worked with a 2" wide brush so it's very loose stylistically. I am really pleased with it and really looking forward to seeing where things go next week. Our homework was to prepare 2-3 canvases, each with three or more layers of coloured grounds. In the vein of staying well outside my comfort zone, one will be yellow/putty/parchment (ending with a lightish shade), one will be red/pink/purple (ending with a medium shade) and one will be blue/green/navy (ending with a dark shade). And then I guess we'll have to wait and see...

Posted by Minding My Own Stitches at 5:01 PM 12 comments:

Things are really moving along with my Vallisneria Socks. This picture is from Saturday morning - just two more repeats and then the toe. We're winter camping at the cottage this weekend, so with the 2.5 hour drive each way I'd expect that I'll be well into sock two by the time we come home on Monday. 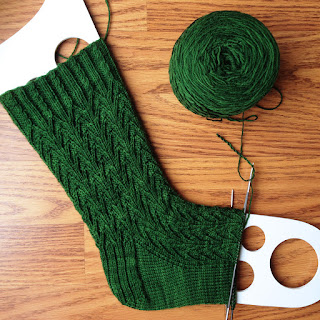 The pattern is named for a fresh water aquatic plant Vallisneria, commonly called eel grass or tape grass. The KAL theme was "Biology" so I picked out this tonal green yarn from the stash and matched it up to this pattern for Vallisneria Socks by Jean Clement.

As written the pattern is knit on 2.75mm with a primary stitch count of 64 stitches. Breezing through the Ravelry projects, I noted a couple of mentions of the sock working up small. So I opted to add two pattern repeats and cast on 80 stitches and then shifted down to 2.25mm needles. I couldn't be happier with the result. The pattern is quite stretchy horizontally, so when worn it opens up nicely without being terribly stretched.

Just before starting the heel flap I purled together every instance of two purls stitches to bring the stitch count for the heel flap down from 40 to 30. I have pointy heels - narrower and longer heel flaps work best for me. I continued with gusset decrease until I had 30 sole stitches. Add those to the 40 instep stitches and the primary stitch count for the foot is 70 sts. That's on the high side for me, but seems to suit the pattern. When I reach the toe I'll employ the same decrease strategy to reduce the instep stitches from 40 to 30 sts before starting the toe decreases.

I'm actually amazed at how much I like these socks. I almost never repeat a pattern but with this one I just might. I'll admit that I still think the pattern's a bit pricey for what it is, but the fact that I'm so happy with the result goes a long way to making me happy with my purchase. That being said, I did have to do a lot of modification to get the fit where I wanted it, so that's not a great reflection on the pattern. Never mind all that though - awesome green socks!!!!

Posted by Minding My Own Stitches at 9:00 AM 13 comments: 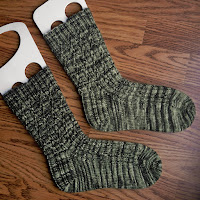 We're in a bitter cold snap right now - perfect weather to stay inside and knit, in my opinion. And lots of knitting has been happening around here. My Thornfield socks are finally done, thanks in no small part to last minute efforts to finish them in time for Christmas gift giving. Sadly they weren't done on time but at least one was done so that the recipient could try it on and await the second sock of the pair... the gift of best intentions rather than a finished pair of socks! 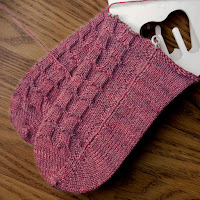 The pattern is actually quite lovely with intertwining lattices of travelling stitches but it is almost entirely overwhelmed by the busyness of this yarn. If I make them again I'll stick with a light solid coloured yarn to show of the pattern. As a result of the travelling stitches the sock knits up quite small. I had originally planned these for myself, with the idea of wearing them to Rhinebeck, but when the trip fell through and when the first leg was so obviously tiny, I decided on a change of course. Rather than rip the leg and restart, I earmarked this pair for a friend. 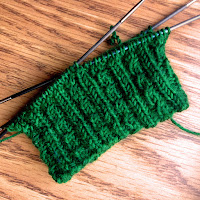 In my last post I mentioned that I had signed up for a couple of KALs in the Solid Socks Group on Ravelry. I've made a bit of progress on each of the KALs.

The mystery KAL is a pair of toe-up socks designed by Sarah Ronchetti. I don't mean to imply anything negative about the pattern, but my participation is reminding me why I don't usually like MKALs. The pattern is not really my cup of tea. In general I prefer to knit cuff down rather than toe up for my socks. I find that heel flap and gusset construction allows me to tailor the fit of the sock better than a short-row sock. As well the sock pattern as written features a very blunt squarish toe box - that won't work for my pointy toes at all, so I've already altered that. And the pattern section on the instep is centred between wide purled panels. I don't much like that either.

The yarn came from a destash by a fellow Raveller. And the fact that I hate the colour isn't helping. You could call it a warm shell pink. It just makes me think of hot flashes. In the skein it appeared pretty solid, maybe slightly tweedy but it's knitting up faintly stripey, and I'm not loving that either.

I considered using twisted stitches to tighten up the transition from knit to purl, but decided against that. To qualify for prizes in this group you must knit the pattern as written. Looking back on it now, I'd rethink that decision. Having altered the toe, and with the yarn inclined to stripeyness, I'm pretty sure I've already disqualified myself. The transitions look a bit crappy now, but I think blocking and wear will help. That's what I'm telling myself anyway.

Clue one is done. Clue two dropped last night so I'll get to that some time next week.

For the second KAL I picked my own pattern based on the January theme "Botany". Once again the yarn came from a fellow Raveller's destash -  an unlabelled cake of green yarn. For my pattern I chose "Vallisneria" which is meant to be reminiscent of sea grasses. I can't tell you how much I'm enjoying this green. Not too dark to present any difficulty seeing the stitches on the needles or in the knitted fabric. Not even remotely pastel or wishy-washy. And not a hint of pink! Ahhh, bliss. This KAL is meant to finish at the end of January... I'm not sure I can manage that, but we'll see. Gavin wants his grey socks sooner than later so I might have to switch gears and re-cast them on instead of working on anything else.

And finally, some of you showed interest in my paintings, so here's a collage of my favourite six from 2016. I start painting workshops in about ten days so it will be interesting to see where it goes from here! 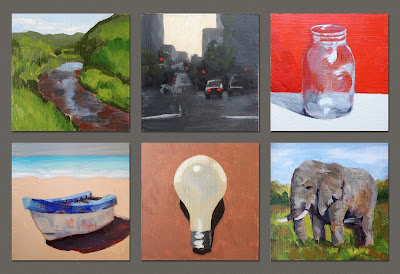