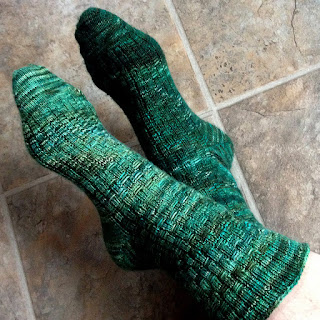 It's possible that I'm catching up. Although it's tenuous and things could go off the rails at any moment. The house was cleaned, staged and listed. Now we're at the cottage while the realtor schedules showings and Open Houses. At least now there's enough of our gear at the cottage that we can function normally. Pretty soon I'll have to stop calling it "the cottage" ... it'll just be home!

Last night I finished my Fidget Socks. It's a nice little pattern, perfect for busy yarn and super easy. A bit yarn hungry though. I knit these toe up as written, and used every last bit of yarn. The legs are not as long as I'd like but that's all she wrote. It'd help if my feet weren't so long. 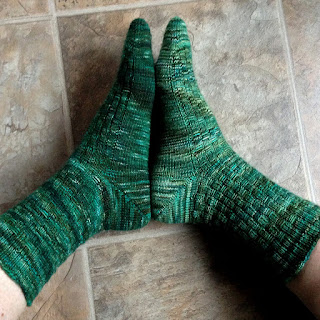 And if you're wondering, no that's not a trick of the light - one sock is dramatically darker than the other. I noticed when I caked the yarn that the light shades and the most contrast in the variegation was concentrated in the first half of the skein. I am somewhat annoyed by this. Am I right to think that a knitter ought to be able to make a matching pair of socks from a skein labelled as "sock yarn"?

It's the first time I've made a Fish Lips Kiss Heel with adjustments to increase the stitch count on the bottom of the foot in order to lengthen the heel cup. It works really well and fits very nicely. I increased 10 sts - my heels are POINTY - but I think 6-8 sts would have done the trick. Still, they fit well, so it's all good.

I'm happy to have these off the needles because the knitting was getting a bit boring. Now that I've moved all the yarn stash to the cottage both Gavin and I have had a chance to see exactly how much sock yarn I have. LOTS. Not many full skeins but three shoeboxes full of sock yarn scraps. Now I'd better get knitting it! I plan to start with Somewhere Socks. I spread all the yarn out on the floor and have organized two possible colour combinations. One combination is made up of six different shades of light to dark neutrals. I'm going to start with those. Another combination is made up of ten different shades of blues and greens. If I'm not bored of the pattern after the first pair, then perhaps I'll make a second blue/green pair.

It's a cold, windy and rainy Sunday hereabouts. Is that good for a real estate Open House? Or are people likely to stay home? I guess we'll see. Fingers crossed that the home buyers are out today! 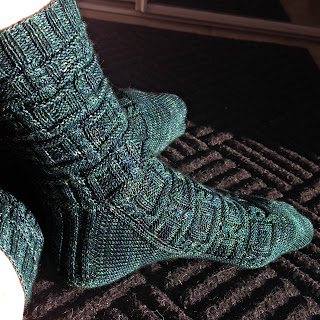 As expected Albert de Moncerf socks are done. I couldn't resist the morning sun so I took photos in the front hallway - lots of sun and contrast and glowing white winter legs! Eek!

It's a really, really nice pattern. Just the right amount of cabling. Just enough chart to keep it interesting but not so much to require full attention. A really squishy resulting fabric that clings snugly. And it's free! I highly recommend it! 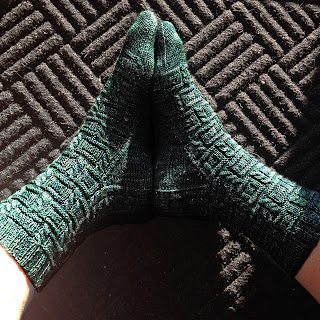 I've knit this pair exactly as written and the resulting pair weighs 86 grams. Considering that I started out with slightly less than a skein - 90 grams - it couldn't have worked out much better. If I'd had more yarn at my disposal I'd have added more length to the leg. The leg is stretched out in the photo but tends to squish down lower towards the ankle when left to its own devices.

The yarn is Red Sock Blue Sock Basic Sock yarn. I picked it up at the Toronto Knitter's Frolic a few years back. The base has since been discontinued. Although I loved the dye job on the yarn I didn't enjoy knitting it and wouldn't have purchased it again. It's quite thin resulting in a thin-ish fabric even when knit on 2mm needles, so that's not good. As well, it's not very smooth and it has a lot of twist so the stitch definition isn't great. Oh well, I've knit all of it up now so that's water under the bridge.

I'd definitely consider buying from Red Sock Blue Sock again because the dye job is lovely. The photos don't do it justice, but the colourway is a lovely tonal blend of blues and greens that I just couldn't resist. I picked it up, snuggled it, put it down, picked it up again, walked around the shop with it, put it down again, and then I gave in and bought it. Nicely semi-solid so it doesn't pool or compete against the pattern, but still gorgeous and interesting. Maybe I'll like one of their new bases better?

With this pair off the needles I've been devoting my time to my Fidget Socks. Another free pattern, but this one is so simple that it's on the boring side. The first sock is coming along nicely; I'm nearly ready to start the heel. But I'm tempted to cast on another sock. I happened across this pattern for Somewhere Socks and was thrilled to find a coupon code to download it free on the first day it was released. I think it'll be fun to knit up with yarn scraps, so I just need to look through all my oddments and make a plan. Mostly I'm trying to avoid starting them so that my concentration remains focussed on the socks already on the needles!

That's my knitting update for this week. The next several weeks are going to be super busy. We're planning to list our house at the end of the month so I need to deep clean, de-clutter and stage room by room. Fingers crossed the process goes smoothly and quickly!
Posted by Minding My Own Stitches at 6:25 PM 7 comments: 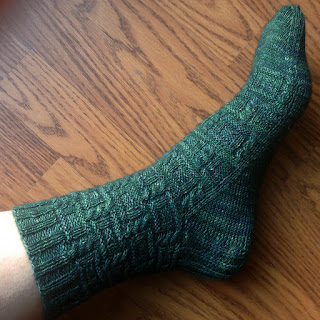 Things are progressing nicely with my Albert de Moncerf socks - sock one is done (as you can see) and sock two is at the heel. No reason that this pair shouldn't be complete by the end of the week. It's a very nice squishy pattern.

As I mentioned last week, the leg is four repeats - as suggested in the designer's instructions -  which results in a leg that's a bit shorter than I'd like. Although I was tempted to add another repeat, I held off since I only had 90 grams of yarn to complete the socks. That turned out to be the right decision... my finished first sock weighs 43 grams so there won't be much left over when the second sock is off the needles. 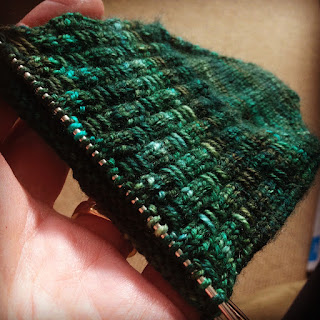 Although the pattern looks a bit involved, it's really quite simple and easily memorized. There's a bit of cabling - just enough to keep it interesting but not enough to slow you down or make the fabric inflexible. All the rest of it is just knits and purls. It's the first sock pattern from designer Caoua Coffee that I've ever knit, but it certainly won't be the last. It's very well written. The fact that I made no mods whatsoever to the pattern tells you something, doesn't it?

At the same time I was scanning through the Ravelry databases looking for a pattern that would show off the variegation in my new skein of Zen Garden sock yarn. Seems to me a simple pattern, like Fidget which uses slip stitches to break up pooling, is a good choice to make the best of all the interesting variegation. And doesn't it make an interesting textured tweedy pattern?

This is another free pattern. It's a pretty simple knit but I suspect it's going to be pretty yarn hungry. That's why I decided to knit it toe-up as written, rather than convert it to cuff down. Working toe up I can finish the leg as soon as I get to about 45-50 grams used. In this case though I have already modified the pattern. I added one increase to begin the top of the foot so that I could add a matching purl column at the right side of the chart to mirror the left side.

All things are coming up green here, including my knitting... must be spring!
Posted by Minding My Own Stitches at 8:57 AM 4 comments: