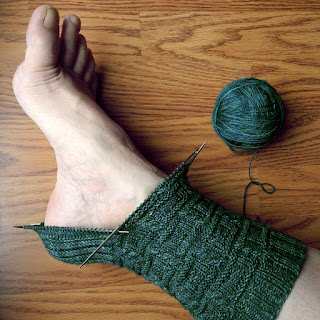 Shortly after publishing my post last Sunday I went ahead and cast on Albert de Moncerf socks. It's a lovely pattern and I'm enjoying it tremendously. Did I mention it's a free pattern? I've turned the heel and started the gusset decreases on my first sock. If I'd had my druthers I'd have added another repeat or two to the leg, but this is the leftover Red Sock Blue Sock Basic Sock yarn after supplementing my Crest socks so I'm afraid I'd run short if I started down that path!

Life got a lot busy again towards the end of the week, so not much more knitting got done. A bit of stash enhancement did happen though! 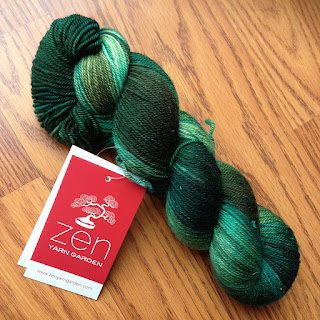 This lovely skein of Zen Garden Serenity 20 came to me in a trade. I met someone named Amy in my painting class, and when she discovered that I knit on Facebook she offered to trade yarn for a couple of my small paintings. So it turns out that Amy is Amy R Singer. Small world, huh? She's absolutely lovely! And she can write-off yarn purchases as a business expense. Now that's living the dream! Time to swan through the sock pattern database to decide what to knit!

While at the Purple Purl I also picked up these four balls of Jawoll Superwash sock yarn for Feny socks. I didn't think I'd get away with a 50 gram ball of each colour so I went with two of each. I expect there's gonna be a lot leftover. I'm still in two minds though about whether to knit matching socks or fraternal twins by reversing the colour scheme. Opinions? 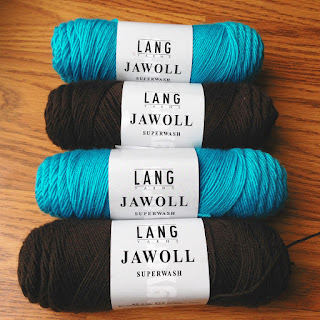 In other news, spring isn't here yet but we're expecting double-digit temperatures next week so it's not far off. I CANNOT WAIT!

That's it for me today... must run now, I'll catch up with everyone later. Have a great Sunday!!

Posted by Minding My Own Stitches at 11:24 AM 9 comments: 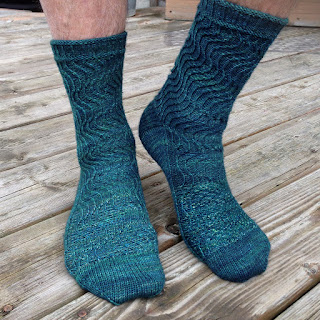 It was three weeks ago that I apologized about the week getting away from me. Looks like an entire month has gotten away from me. Yeah, not enough hours in the day!

Fingers crossed that there's a light at the end of the tunnel though! Looks to me like I'm starting to catch up on several fronts.

On the knitting front, Gavin's Crest socks are finally done and they are awesome!!! I cast on the first sock in April of last year. It doesn't usually take me this long to make socks but I struggled with these. For much of the time these went in and out of hibernation simply because the pattern is so chart-y and attention-intensive. Not good work knitting. Not good travel or commuter knitting. Not good TV knitting. Not good stress-relief knitting. And then for the last few weeks I tried to kid myself that I could knit the second sock while binge watching Netflix which resulted in at least three major tink-backs to fix wherever I'd gone off the rails. And isn't it typical that I won't learn my lesson from the first setback, or even the second!!! Apparently I AM that delusional!

The Artfil Belle yarn was a gift from Frieda at Restless Needles. It's a gorgeous tonal blue green that made me think of water, so it was the perfect choice for a wavy pattern like Crest. It's got a lovely soft feel to it and was an absolute pleasure to knit. I was going to run short so I supplemented by working alternate rows with a similar colourway of Red Sock Blue Sock Basic sock yarn on the foot from the end of the gusset decreases to the beginning of the toe box - you can see it in the photo. It's a much rougher, thinner and more unevenly textured yarn. It's not an awful mismatch and it was the best I could do. I finished the socks with just a couple of yards leftover so supplementing was definitely necessary. Here's hoping that the mismatch is less obvious after a couple of washes and wears.

So this morning I find myself with nothing on my needles. Okay, to be perfectly honest Willow Ware socks are languishing in hibernation but they're staying in hibernation until I am fully retired because of its crazy intarsia charts. My plan had been to cast on Twisted Flower socks in a blue colour of CoBaSi sock yarn for the March KAL in the SolidSocks group on Ravelry but I don't think that's going to happen. There is absolutely no chance that I'll start and finish them in time to participate in the KAL - my schedule is improving but it's not that wide open! And after all those tinks and reknits on Crest I'm not particularly keen to start another chart-y and attention-intensive pattern. Mostly I feel like casting on another fairly vanilla sock with the leftover Red Sock Blue Sock sock yarn which is already caked, so that's what I'm going to do. Albert de Moncerf, I think!

Tomorrow's the first day of spring and I CANNOT WAIT! I hope the snow's behind us because I want to garden!! Happy Sunday everyone!
Posted by Minding My Own Stitches at 11:15 AM 7 comments: