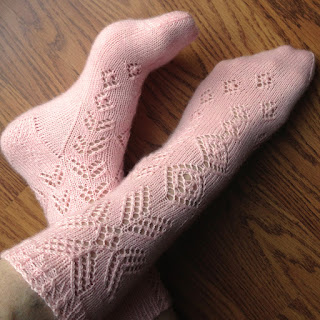 The good news is that the MKAL "Not Bothered By the Cold" socks are done. I finished them up on the evening of the 23rd, leaving myself enough time to wash, block and dry the finished socks before wrapping them up and gifting them on the 24th. They are pretty socks but all that stockinette makes the legs a bit baggy and saggy in my experience. But pretty socks nonetheless and I think Barb is going to love them. And if you're wondering, yes the socks are too small for me as shown in the photo, but Barb's feet and legs are much thinner/smaller :)

The bad news is that my Thornfield socks are not done. I'm more than halfway down the leg of sock two so I should finish by the end of this week. Time will tell whether I see the intended recipient before that. The original plan was to drive out to the Lake today but the police are closing highways in every direction because of severe icy road conditions from freezing rain, so that plan has been cancelled.

The revised plan for today is laundry, painting and maybe some quilting. Those who follow me on Instagram know that I've been painting my way through the book "50 Small Paintings". With any luck I'll complete painting #47 today and get started on painting #48. I'm motivated to finish the 50 paintings soon for two reasons: I got another painting book for Christmas, Acrylics Unleashed, and, Gavin bought me an eight week course of painting workshops at the local art centre starting in mid-January. Very exciting (and just a little intimidating too)!

Posted by Minding My Own Stitches at 10:07 AM 9 comments:


As expected my pink socks are done, but I'm still up in the air about whether to overdye them or not. Using photoshop I tried to simulate what the overdyed result might look like with three different food colours, but there's no guarantee that my simulations will be accurate. I am leaning towards the Sky Blue food colouring - I find it unifies the cuff and leg yarns and is a bit brighter than the teal food colouring. The burgundy seems a bit darker and more intense than I think I want. But what do you think?

The toe colour is darker than I'd hoped but it really was the only stash yarn that I had that in anyway complemented the leg and foot colour. There was another yarn that I had in mind but after knitting several rounds it turned out to be self-striping which added another unwelcome element of contrast. I put that aside for another pair of socks.

Once the pink socks were done I was supposed to go back to sock two of my Thornfield socks. I didn't though. Instead a MKAL caught my attention on Ravelry and in a blink of an eye I'd purchased the pattern and signed up for the knit-along. I've knit clue 1 (the cuff) and clue 2 (the leg) of the first sock so far. Clue 3 doesn't come out until the end of the week so I think I'll shift sock one onto scrap yarn and knit sock two to the same point.

You may be surprised to see me knitting pink yarn again. I'm sure I've mentioned that it's really not my favourite colour?! This time around these socks are to be a gift for someone who specifically asked for a pretty, girly pair of pink socks. So pink it is. I bought the yarn on Friday at Spun Fiber Arts. It's Peppino from the Yarns of Richard Devreize and what gorgeous yarn it is to knit! Perfect weight for fine socks, very smooth and springy yarn, lots of twist, and a distinctly lanolin feel to it. I'm really enjoying knitting with it. I am already imagining knitting various Rachel Coopey colourwork socks with it... like Alfrick or Twylla. With two skeins yielding 440 yards I'm bound to have lots leftover!

So that's my week's work cut out for me. And that second Thornfield socks really DOES need to be done by Christmas, so I'd better get going on it!
Posted by Minding My Own Stitches at 4:46 PM 12 comments: 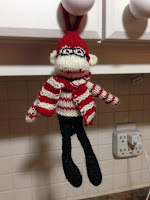 My secret swap package arrived in Louisiana so I can do a reveal. It's a Christmas Monkey! What makes a monkey festive? Hmmm... a red and white striped scarf, maybe? I don't know; I just thought he was cute.

The pattern is Mini Monkey Christmas Ornaments from Boo-Biloo. It came up in my Facebook feed from LoveKnitting and I thought it was just hilarious. 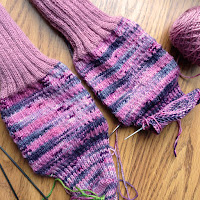 The individual pieces were pretty quick knits but the finishing was very fiddly. Each piece - arms, legs, tail, ears, scarf and body - was knit flat and then mattress stitched closed. I think if I did another I'd have a good think about how to knit most of this in the round. And the hairline and face were done in Intarsia. All the little complications did keep it interesting. Also I learned from the pattern instructions to position a piece of felt on the inside of the toy behind the area to be embroidered to support the embroidery stitches. Works perfectly! 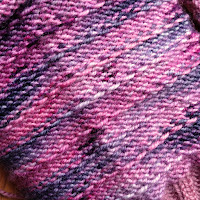 Mr. Monkey ended up about 6" from top of his head to bottom of his foot, so I don't know how "mini" he really is. To my mind, that's on the large size for an ornament. Cute nonetheless and KristiRose in Louisiana seems to really like him!

I was a day late in sending my swap package. As I was packing things up and reviewing the questionnaire responses I was reminded that my Swap recipient is lactose intolerant which made the planned chocolate treats entirely inappropriate. The next morning I re-shopped and got a quick lesson in how difficult it is to find commercial treats that are milk free and produced in milk-free facilities. After striking out at the local grocery stores I finally found some appropriate choices at the Health Food Store. I'm so fortunate not to have food allergy or sensitivity issues!

I did finish the blue-green vanilla socks and then cast on another pair of vanilla socks. This time I decided to cast on my least favourite colours - pink and purple - from amongst the yarn donated by a fellow Raveller just to get the yarn knit and out of my stash! The cuff is knit with Louet Gems Fingering which is a lovely yarn with no nylon content. The variegated pink/purple yarn I've used on the leg came with no label but it feels like a superwash merino/nylon sock yarn. Within the first dozen rounds I realized that the variegated yarn was pooling badly... so badly that it seemed likely that the purple was going to stack up on one side of the leg, and the pink stack up on the other side, and never the twain would meet. Agh. Maybe that's the reason it ended up being destashed??

I tried alternating with another yarn but I didn't like it any better, so I settled on another strategy. Every fifth round is worked as K1 Sl1 which works to kick the colours about halfway across the round. The result is somewhat striped but I like it well enough.

There's definitely not enough of the pink/purple variegated yarn to complete two legs, two heels and two feet - even with these super long cuffs. Instead I've knitted both socks to the same point with the plan to knit both as far as I can to the last few inches of yarn and then switch to another not-quite-matching pink/purple yarn to finish the feet and toes. I hope it's not too horrible.

If the final result is really horrifying I can always overdye the finished socks to subdue the pink, unify the colours and flatten the contrast. They might just end up purple. Could happen! I've got teal food colouring in the cupboard at the ready!