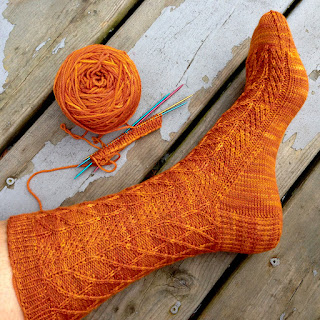 It's been crazy record-setting hot here over the past week, Sweaty fingers and hands make knitting unpleasant, so progress is a bit slow. Sounds like the heat wave will end Wednesday, at which time seasonal fall weather will finally arrive. The extra blast of summer was pretty nice though - swimming and paddling every day!

I did cast on a vanilla sock - Tuxie Love - which I've added to my list. It's simple pattern with a bit of colourwork at the top of the leg and a bit more at the end of the foot. And it's perfect choice for a friend with a birthday at the beginning of November, with her beloved tuxedo cat Lucy! Not much to show yet; if I finish the colourwork on the leg before the next post, then I'll snap and post a photo.

Mostly I've worked on Crosshaven socks. On Sunday morning I kitchenered the first sock and cast on the second. I've knit the design as written, except that I made the heel flap longer to accommodate my pointy heel and high instep. Perfect fit and gorgeous pattern. I should mention that in the photo I am wearing the right sock on my left foot so that you can see the mock cable detail down the side of the leg and foot. The left sock is a mirror image.

Reviewing my list I'm feeling badly about how long those Somewhere Socks have been hibernating, so perhaps I'd better find some time to spend with them :) After Crosshaven though, and perhaps before Gschnitztal. We'll see.

That's it for me today! Have a great week everyone!
Posted by Minding My Own Stitches at 10:35 AM 8 comments: 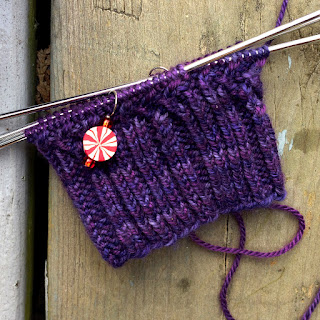 Not much to show for this week. Construction around here cleared the bedroom with the closet wherein Gschnitztal awaited, so I was able to get to it and take a photo. It's lovely yarn - so soft and smooshy that it must almost certainly contain cashmere. What a gorgeous colour way too, mostly purple with subtle flashes of lighter and darker purple, and bit of blue. But it is dark. Darker even than the photo. And the pattern is exactly my cup of tea - fiddly twisted stitches and somewhat chart-y... and a nice change from the colourwork socks I just finished.

Unfortunately I had to set this WIP aside for two reasons:

i) The evening light in the new place is terrible! I find it impossibly frustrating to attempt to knit anything dark or fiddly. So right now good light hours are being allocated to my Crosshaven socks. Once they're done, Gschnitztal socks will move to the front burner.

ii) Both Gschnitztal and Crosshaven feature left and right crossed stitches, but the way the patterns are written, the stitches are worked differently. I find it too confusing to switch back and forth between the patterns, so I've decided to complete my Crosshaven socks before getting back into my Gschnitztal socks.

What is clear to me is that I'd better cast on ANOTHER pair of socks - this time in a vanilla pattern with light coloured yarn that I can knit effortlessly in poor evening light while watching TV. So my task this aft is to sort through my yarn and patterns to make some decisions about that. Well. later this aft when I get back from a swim in the lake. The weather this weekend has been too gorgeous to spend inside!
Posted by Minding My Own Stitches at 3:16 PM 11 comments: 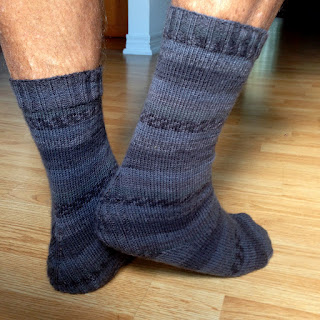 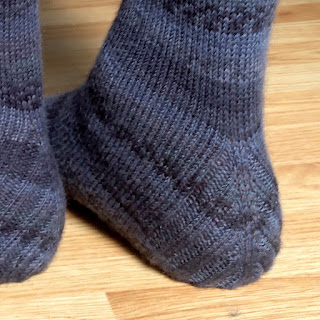 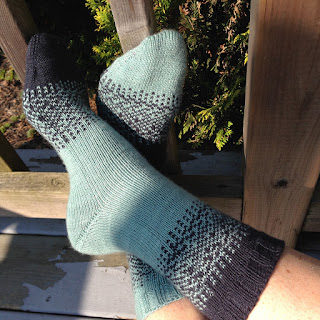 Well, that was a long break! We've been a construction zone here at the new place, with work proceeding full speed ahead towards complete winterization and insulation. Turns out I quite enjoy hand digging trenches. Ripping out old soggy and mouse-infested fibreglass batts? Not so much! Anyhow, the infill walls between the concrete piers are finished on the south side and well underway on the north side. With any luck the spray foam guys will do their thing within a few weeks. WINTER IS COMING!

I have managed a bit of knitting here and there too. My Grey is the New Black Socks are done. Gavin really likes them, which is great. I've done this pattern before but this time I was more careful about twisting my stitches at all the M1s, so there are no holes. I'm a real fan of this pattern: it's nicely vanilla, with an interesting heel and perfect for self-patterning yarn. 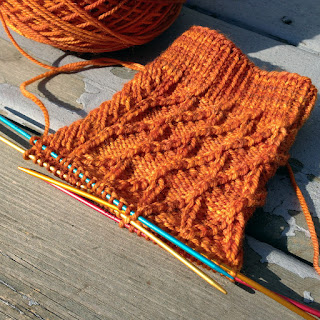 Also done are my Almost There and Back Again Socks. I call them "Almost" because I made my own chart for the colourwork with more gradual transitions from one colour to the other. Again, this is a nicely vanilla sock. After knitting sock one, I weighed my yarn and it was clear that I wouldn't have enough if I knit an identical twin, so I reversed the colours. I like 'em this way but Gavin is horrified. "You'll have to knit two more" he said, but never mind. The colourwork on the leg makes them a bit of a tug over the heel, but not too bad. In retrospect it would have been a good idea to go up a needle size more on that section.

Not shown are my Gschnitztal Socks. I picked out a subtle tonal royal purple MCN yarn from stash with no ball band for these socks. Originally I cast on with carbon fibre needles but found there wasn't enough contrast between the dark needles and dark yarn, so now I've switched to shiny metal needles. One round has been worked since the needle switch, and it's definitely easier. If I could find some pointier light coloured shiny sock needles, that would be even better. Hopefully I can show you some progress on these next week.

The Crosshaven pattern is one of several socks from designer Rich Ensor in my favourites. This one has a striking travelling stitch pattern and it looked to me like it might have a bit more ease around the heel than some of his other patterns. It's easier than it looks - although there is a lot of purling - and I'm quite enjoying it.

For these socks I'm using Addi Flipstix needles for the first time. They are ultra lightweight which I like, but they do seem to bend and distort very easily, which I do not like. One end of each needle is pointier than the other - the idea is that you can choose which end to use - but I find myself always opting for the sharper tip. Time will tell whether the blunter tips will ever find use. They are a slightly matte finish so they're a bit grippier than shiny metal needles but not as grippy as wood or carbon fibre needles. So far I like them fine but I'm not sure they're worth the price.

Through the upcoming week I expect I'll be knitting the Crosshaven socks. And then get back to finish up the other two WIPs before I cast on anything else! But if the weather cooperates my attention will be on construction projects and not knitting. Have a great week, and stay safe if you're in Irma's path!!

Posted by Minding My Own Stitches at 11:23 AM 9 comments: