For the last week I've been knitting monogamously on the second pattern for the Cookie A Sock Club June shipment  - Revolution Socks. After receiving notice that the August yarn and pattern bundle will ship early, I'm extra motivated to get this pair of the needles.

The pattern is very lacy - which is not my cup of tea - but they're being knit to give away so hopefully the recipient likes the pattern. The right sock is a mirror of the left; I like that. On the other hand the right sock uses reverse yos; I'm not so enthusiastic about those. As warned in the stitch legend, those backwards yos really want to creep across the adjacent stitches to the right of them so you have to slow down a bit to separate the stitches into the correct order.

Why reverse the yos? Here's what Ysolda Teague has to say:

The direction in which the yarn is wrapped around the needle affects the size of hole created by a yarn over. If you are working on a project that has lots of yarn overs between different types of stitches you may want to swatch and alter the yarn over directions so that your yarn overs are of a uniform size.

Haven't we all encountered situations where one or more yos look sloppy compared to the rest of the fabric? Maybe this is the answer? Particularly when a yo falls between a knit and a purl stitch!

Good thing this blog post has me rereading the reverse yarn over instructions from Ysolda's blog .... I've just realized that I've worked everyone of them incorrectly by knitting into the front leg on the following row. Instead those reverse yarn overs must be knit into the back leg to avoid twisting the stitch. And that certainly explains that niggling feeling that I've been having - that the right sock is knitting up smaller than the left. Twisting all those stitches would definitely make it smaller!

So once I finish grocery shopping and laundry, I guess I'll be ripping the second sock back to the cuff and starting over! Oh well, at least I'm not too far into sock two! And thank goodness for another small blessing: sock one just used regular yarn overs.

Posted by Minding My Own Stitches at 9:02 AM 9 comments: 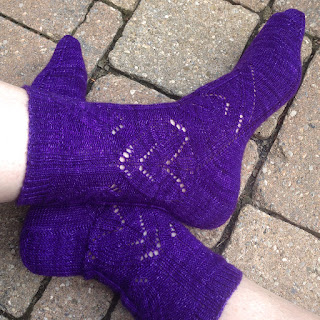 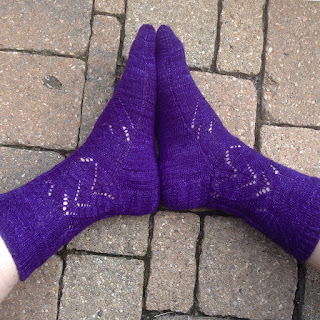 I'm pleased to report that I've got the first pair of socks for the Cookie A Sock Club June Shipment completed. And more than a little relieved.

The pattern is Apollonia, and I can't say I  enjoyed it much - entirely too much purling, too many YO eyelets, a pattern that ends partway on the instep and ends with plain stockinette foot and toe, and a shortish leg with no simple way to lengthen it - nope, not really my thing. It's a nice enough result but the knitting felt very tedious. 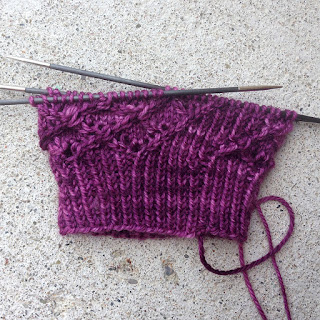 Fortunately a coworker paused at my desk to admire the sock pattern and yarns so the finished socks have already found a new home.

With those socks off the needles it was time to cast on the second pair of socks for the Cookie A Sock Club June Shipment. This pattern is Revolution. So far the knitting is more interesting than the other pattern, although those six K3togs every fourth round are painful. Thank goodness those are carbon fibre needles, or I'd have snapped 'em by now! This pattern still has too many YO eyelets for my taste but we'll see what it looks like once it's knitted a little further. The yarn is Socky Talky from The Dye Guy who is a local dyer. The colourway is "Scottish Heather" ... still purple but I like this purple way more! A friend picked out the yarn asking that I knit a pair of socks for her Mom's caregiver, so these will be given away too!

My Vanilla Bean Striping socks for my July Charity Socks list are a bit further along too. The first tube is knitted and awaits its afterthought heel. The second sock hasn't been started yet. No love for Rhombus this week, but I hope to turn my attention to them as soon as I've got Revolution socks off the needles.

It's swelteringly hot here in Toronto. Is it wrong to have Freezies for lunch? Hope you're having a great weekend and see you next week!

Posted by Minding My Own Stitches at 2:39 PM 11 comments: 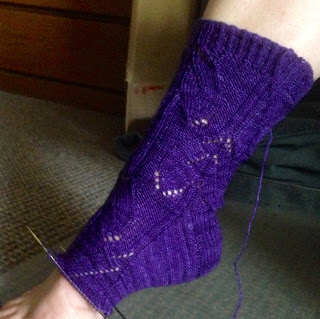 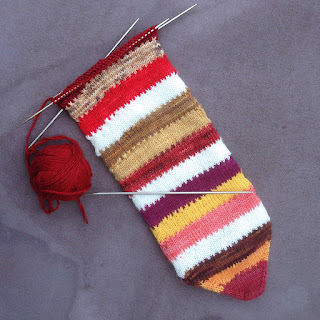 Having spent the past week at a cottage with intermittent slow speed internet I missed posting last week - the inaugural week for this year's Year of Projects. What is the Year of Projects? It's a group on Ravelry where participants prepare and publish a list of goals for the upcoming year, then blog weekly about their progress. I find having a list and being accountable through blogging motivates me to complete my goals. If you're interested please do join here. We're very relaxed - nobody's stressing anyone else out - so don't be intimidated.

Last week at the cottage I did get a bit of knitting done. My time was divided between two projects - Apollonia Socks and Vanilla Bean Striped Socks. The Apollonia pattern is one of two June patterns for the Cookie A Sock Club. I'm using the club yarn - Knitting Notions Classic Merino Superwash Sock in a really dark and loud purple. Sock one is done and sock two is at the heel flap so I hope to finish these this week. They'll be heading out the door to a coworker who admired the colourway.

For my July Charity socks I decided to knit another pair of Vanilla Bean Striped Socks, this time striping all the pink, red, purple, orange and yellows in my yarn scraps with a creamy white 80/20 sock yarn from Shelridge Farms. Once again I'm knitting toe-up with the plan of an afterthought heel. I'm always astonished at how well all the different scrap yarn colours play together! These are working up awesome!

Have a great weekend one and all - what's left of it. I'm ducking out now for a lunch with family! 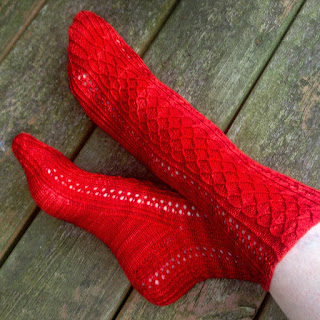 Comments: First let me apologize for the photo: it's oversaturated, but despite posing on an  overcast day in a shady corner of the deck it's the best photo I got. Never mind though, it's good enough to see the pattern I think!

And what a pattern! The pattern is named for an Indonesian butterfly. From Wikipedia: 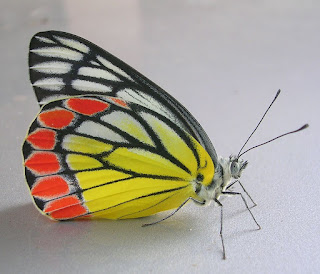 The Common Jezebel (Delias eucharis) is a medium sized pierid butterfly found in many areas of South and Southeast Asia, especially in the non-arid regions of India, Sri Lanka, Indonesia, Myanmar[1] and Thailand. The Common Jezebel is one of the most common of the approximately 225 described species in the genus Delias.

What a beautiful butterfly! But here's the sentence in the Wikipedia entry that really caught my eye: It has bright coloration to indicate the fact that it is unpalatable due to toxins accumulated by the larvae from the host plants. I wonder if brightly coloured socks will have the same protective effect?

The pattern looks complicated but it's much easier than it looks. Every fourth round there are some fiddly crossings that have you playing twister with a handful of needles, but otherwise the pattern was very straight forward. In the pattern photo there looked to be eight repeats on the leg, I knit nine repeats and wish I had knit a couple more - I had enough yarn leftover.

There's no ribbed cuff on this sock; you cast on and dive straight into the chart. The pattern is stretchy enough that this works. The eyelet column continues down the heel. I like the look of that but I'm not sure how practical that is. Similarly the twisted rib continues through the toe section - pretty but a little uncomfortable in shoes. Maybe these are special occasion socks rather than everyday socks? I've knit these as a gift for my sister - who often tells me that she thinks my socks are "too nice" to wear casually - so it shouldn't be a problem.

I knit the pattern as written, including working the toe decreases as written, which has led me to the conclusion that I have much longer, pointier toes than designer Hunter Hammersen. After working a handful of toe decreases every other round she instructs to work decreases every round. That really shortens and rounds off the toe box. It doesn't work very well for my feet but might work for my sister whose toes are much more compact.

The yarn is from Manos del Uruguay; it's a sock yarn called "Alegria" in a fiery red colourway. It's gorgeously soft and squishy, and lovely to knit, but I fear it may not very sturdy or hardwearing. Hopefully my fears are unfounded - it gets great reviews online - but regardless it's perfect for special occasion socks!
Posted by Minding My Own Stitches at 7:28 AM 7 comments: