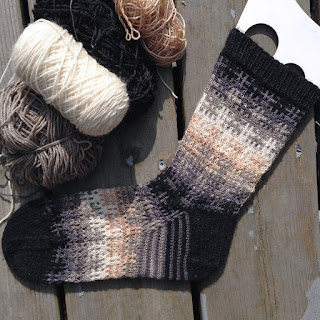 After a lengthy hiatus I'm back to my Somewhere Socks. This week I finished the first sock and made a good start on the second. I'm motivated to finish these quickly as they'll make the perfect gift for a friend born at the beginning of November.

The yarns are scraps from my stash. The pattern sample is shown from a rainbow of colours  - which is consistent with the Somewhere Over the Rainbow theme of the pattern as part of the Socks from Oz collection - but I was curious to see how the pattern would knit up in a range of neutrals. Thinking ahead, I ordered my scrap colours so that the cuff, heels and toes would fall as Kroy black yarn, since it's nice and sturdy. Quite handsome I think, and Gavin agrees, so that's saying something. 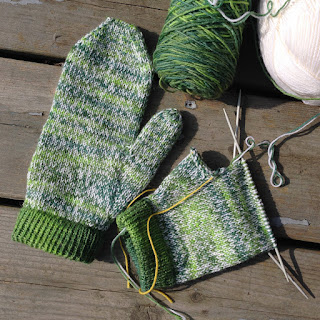 The pattern is super easy; it uses slipped stitches to create the pattern rather than stranded colourwork. It goes quick too, but oh, all those ends! Two for every colour change, so 28 ends to weave in per sock. *sigh*

After "finishing" the first of my Tuxie Love socks, I asked a friend to try it on just to make sure I'd guesstimated the size right. DISASTER. She couldn't stretch the leg of the sock over her heel. NOOOOOO! The sock promptly landed in time out while I swallowed my disappointed and reasoned out how I planned to fix it. Now that a few days have passed I'm calmer and am thinking that I'll cut the cuff off the sock, and a row of still-to-be-determined increases, adjust the colourwork chart to knit over the increased number of stitches and then reknit the cuff from the bottom up. It was my own fault. I knit the leg on smaller than specified needles because my yarn was a very light fingering. I was asking for trouble.

On Thursday afternoon I dropped in on a local knitting group "Warm Up Haldimand" who meet on the second Thursday of each month in Hagersville. The info I found online indicated that the group knits for local distribution, so I thought I'd better cast on something suitable like mittens. Seems to me that sock yarn might be just perfect for mitts - it's 75-80% wool so it's warm and a good insulator, it's 20-25% nylon so it's durable, and I've got lots of it! The green yarn is a handpainted yarn that I bought impulsively. It's been sitting in my stash for years for two reasons: it insisted on pooling no matter what pattern I tried, and the colourway was so much prettier in the skein than knitted. Much nicer as mittens, I think! As for the knitting group, the ladies were all very pleasant and some quite entertainingly funny, so it was nice to meet some local knitters. I'll definitely go again!

All in all it was a pretty quiet week, other than the dishwasher fail. Turns out our cabinet opening is non-standard and the dishwasher I ordered will not fit. That dishwasher has been returned and now we're trying to figure out whether we can source a dishwasher that will fit, whether we can make alterations to our kitchen to standardize the opening to fit a dishwasher without rebuilding all the cabinets, or, whether we were just not meant to have a dishwasher. Que sera, sera. After all, hand-washing dishes for the two of us is not that onerous.

We had a furnace inspection done and it was confirmed to us that the built-in electronic air cleaner was kaput. We had been alerted to that by the Home Inspector before we bought, so the news was not unexpected. The technician removed it and replaced it with a filter assembly. Otherwise the furnace was given a clean bill of health, so that's great. And the filter for the new assembly is a standard size, so we can buy replacements at local hardware stores so that's great too.

I hope everyone's week has also been mostly great! See you next weekend!

Posted by Minding My Own Stitches at 3:48 PM 8 comments: 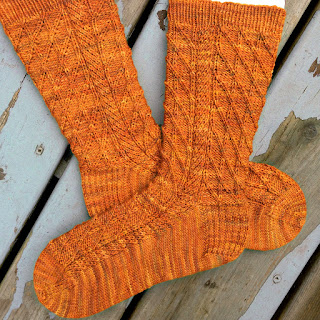 My Crosshaven socks seemed to be going swimmingly until Wednesday, when it was clear that I was facing a stunning loss at Yarn Chicken! Given that the skein I was knitting was labelled as 360M (400 yds) running short of yarn was the last thing I expected. In fact, as I was knitting the second sock I was musing about how I might use up the leftover yarn... a halloween-themed colourwork motif, maybe?

So much for that idea. I knit as far as I could on sock two, then picked out the grafted toe of sock one to rip back a half repeat on the foot. I salvaged enough yarn from the shortened sock one to complete a matching sock two. That's the good news. The bad news is that the shortened socks are now too small for my giant size 11 feet. Onto the gift pile they go - they'll fit someone with feet sized 7-9 I'd think. 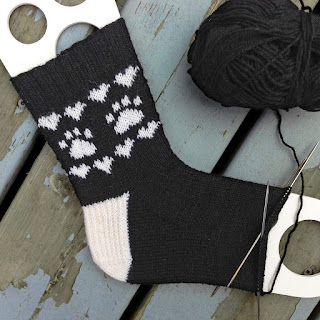 The last couple of weeks we've been watching Ozark on Netflix, throughout which I've been knitting away at a vanilla-isa sock: Tuxie Love. I did have to pay attention through the colourwork on the leg, but the rest is vanilla enough to knit in a dark room, even with dark yarn.

I'm looking forward to getting back to Somewhere socks. I'm super happy with the way my yarn scraps are playing together, so my plan is to finish up sock one and get started on sock two this week. Hopefully I'll have something to show you in my next post.

The car has been acting up this week - an O2 sensor needs replacing and as a consequence the car is using too much gas. We're at the point where the car is so old that it's a decision about whether to spend money on it or trade it in for something new. The mechanic seems to think that we could get another year or two from the car so we're going to do the repairs and see. We did take some 2018 models out for test drives which has made us yearn for a new car with all the mod cons - in dash nav, heated seats, keyless entry, emergency braking... On the other hand, if the car lasts another year, imagine how awesome the 2019 models might be!

Gavin installed the dishwasher that was here when we moved in, only to discover that there is a part broken which causes it to leak. The dishwasher model was discontinued a few years ago; the cost to order the replacement part would be more than the value of the machine. Another consideration is that new dishwashers are far more water efficient and energy efficient than they used to be. So a new dishwasher has been ordered and is scheduled for installation on Friday. It uses 3.3 gallons per cycle (versus 18 gallons per cycle for the old one), and about $30 in electricity per year. With just the two of us, we only run the dishwasher about once a week so it won't even cost that. We have 16 place-settings of dishes and cutlery so that we can easily go a week without washing dishes. In theory, we should end up saving $$ on water. And won't it be nice to get the dirty dishes off the kitchen counter and out of sight!

It's Thanksgiving weekend here in Canada which we are spending quietly at home. It's been unseasonably warm, so warm that I went swimming in the lake yesterday! Autumn chores are calling - especially raking up all the leaves and chestnuts. I hope your weekend is as pleasant and peaceful!
Posted by Minding My Own Stitches at 10:44 AM 10 comments: