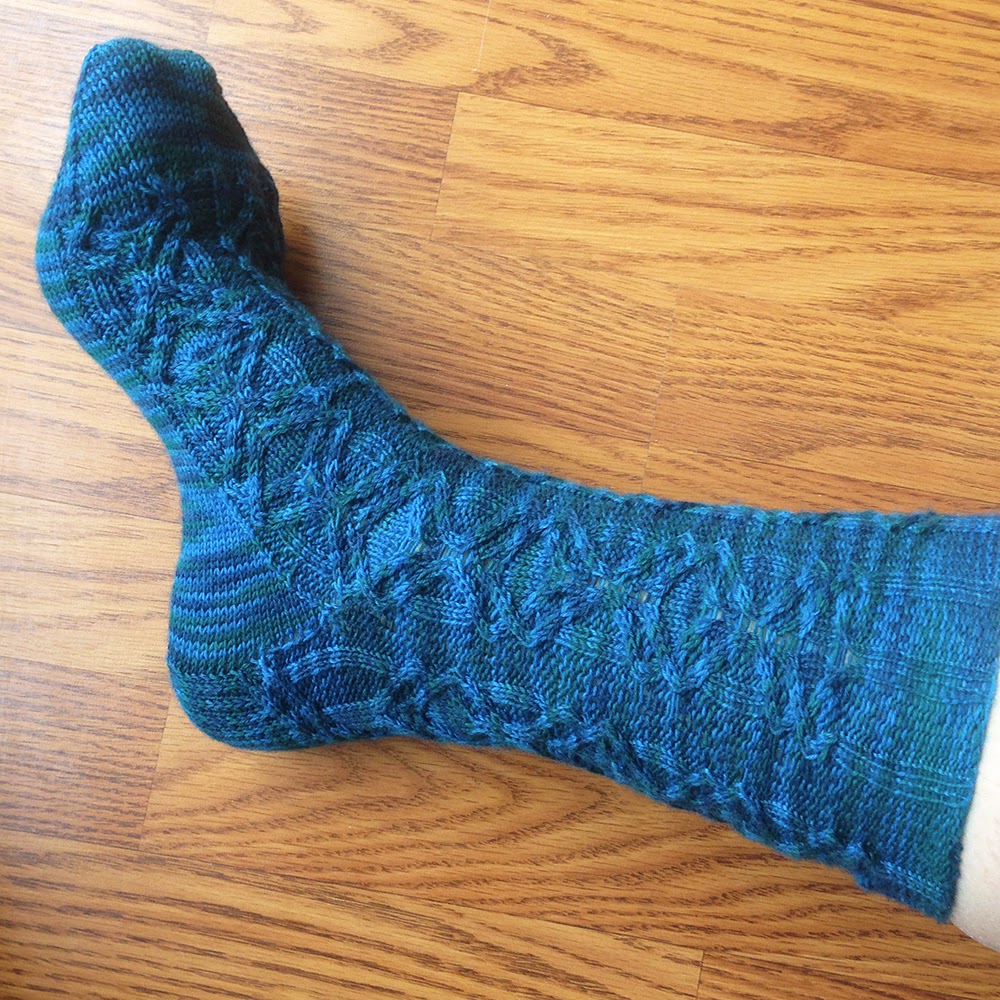 After finishing my first Stalagmite sock I put this WIP aside in favour of a bunch of other things. With any luck I can stop saying that before next week's update. I've been motivated to finish up a bunch of WIPs that have been hanging around to clear the decks for the first Cookie A sock club shipment expected mid- to late-February. 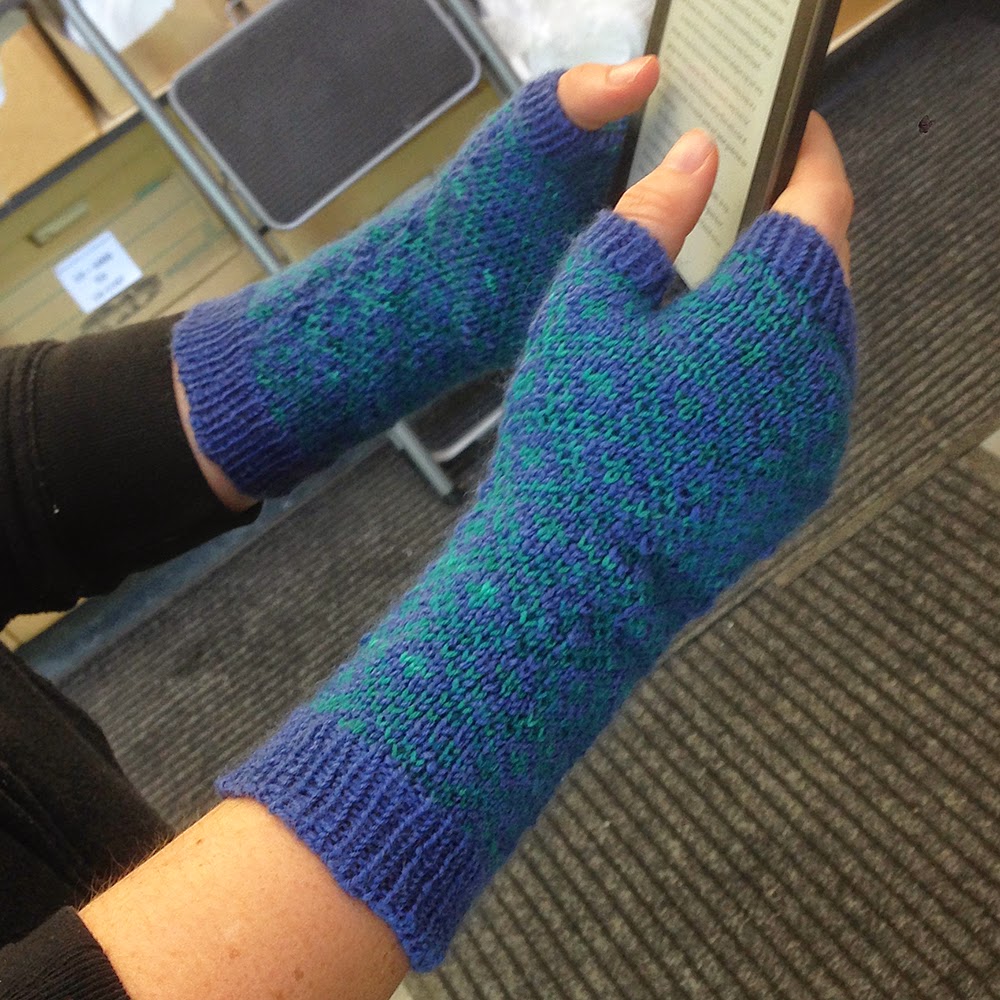 First I finished a pair of EndPaper Mitts. It's the second pair I've knit, and it'll be the last pair. Although the result is beautiful, the knitting is extremely tedious! For this pair I purposely opted for low contrast between the two yarns. I thought it'd be interesting to see the pattern as a subtle effect. I'm a bit undecided as to whether I like the results, perhaps in part because I really dislike that blue yarn. It's Elann Superwash Wool with Nylon but it's really nasty to knit with - very split and not very soft. Never mind, they're done, they look fine and the recipient loves them. And she's very pleased to have a pair that are machine washable! 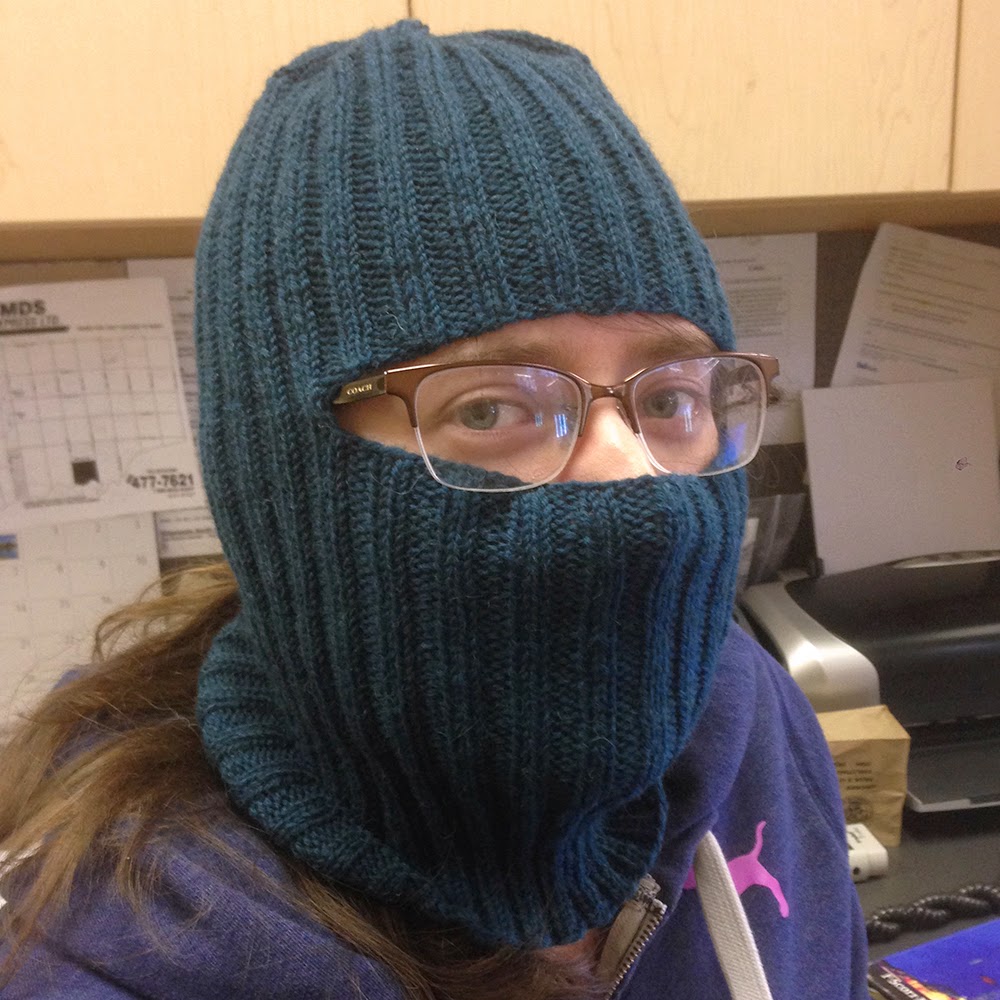 Second I cast on and knit a Balaclava for Alexandra. The weather's been pretty cold, windy and snowy this month, and it's been pretty cold waiting outside work for the bus, so an emergency knitted garment was in order. She already has a pair of Susie Rogers' Reading Mitts that I knit for her before Christmas in this Jaeger Luxury Spun DK, so a matching Balaclava was in order. The pattern is super easy and I was able to knit this up in a couple of days. If you're wondering, she wears the fingerless mitts over a pair of gloves on the very cold days. Alexandra was very pleased with her Balaclava, particularly as it nicely covers her forehead. Now, in my opinion, it looks a bit ridiculous without a hat to top it, so I've cast on a Golden Autumn Hat in the same yarn to complete the set. That's another knit I hope to finish in the next couple of days. And as Alexandra remarked, matching clothing is a sign of really being an adult :)

Also on the needles at the moment is my final sock for The Canadian Crazy Train. I received a sock knit by Sandy in BC in the mail on Tuesday and now I have to knit its mate. I'm trying my best to finish this up today or tomorrow so I will have finished pictures of the final pair of socks next week.

When I signed up for the race I thought it might be fun and interesting. I did enjoy "meeting" my team members and competitors online. It was fun to be exposed to exclusive patterns from local Canadian designers. It was also nice to try out yarn from some Canadian dyers I hadn't had experience with - Yarn Indulgences, Sweet Georgia Yarn and Biscotte & Cie. And admittedly, it is nice to be finished after knitting one sock... no second sock syndrome!

But I doubt I'd sign up for this again for a couple of reasons. Of the seven patterns offered only one or two are designs I would ever choose to knit for myself. And being barred from modifying the patterns for the competition irks me (a lot) - at least one of the patterns could have been made to fit much better with modification, and given my druthers I'd have replaced all the round and star toes with wedge toes. And then all that shipping cost - between ordering sponsor yarn, shipping a sock with yarn to British Columbia, and shipping another sock with yarn to another city in Ontario, I'd estimate that Canada Post benefited by $35-40. That's a lot of money with nothing to show for it!

You never know until you try though. Right?

Posted by Minding My Own Stitches at 1:52 PM 8 comments: 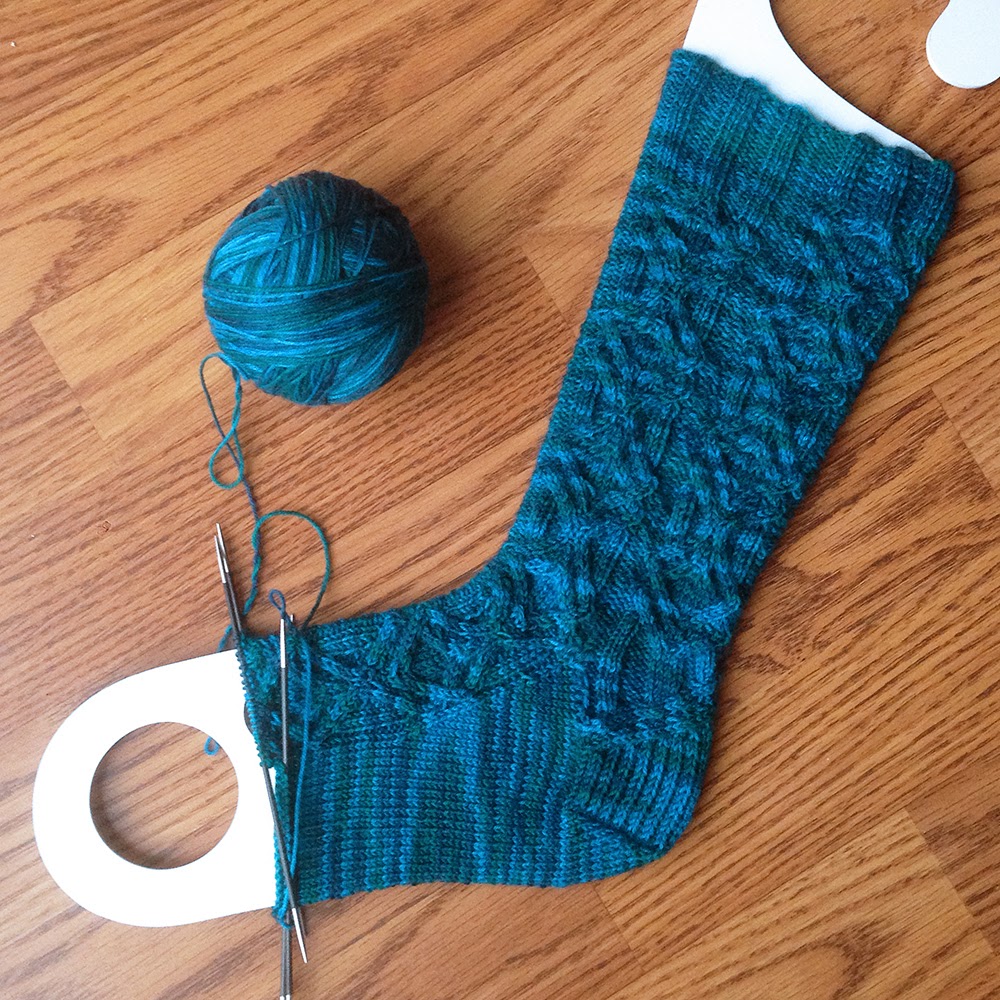 FINALLY! Some progress to report on my Stalagmite socks! It took me a few minutes to figure out where I left off but fortunately reading my knitting gets easier with every pair of completed socks so I was able to determine that it was the left sock, and that rows 11 of chart B then chart A were next for the instep. When will I ever learn to make better notes? 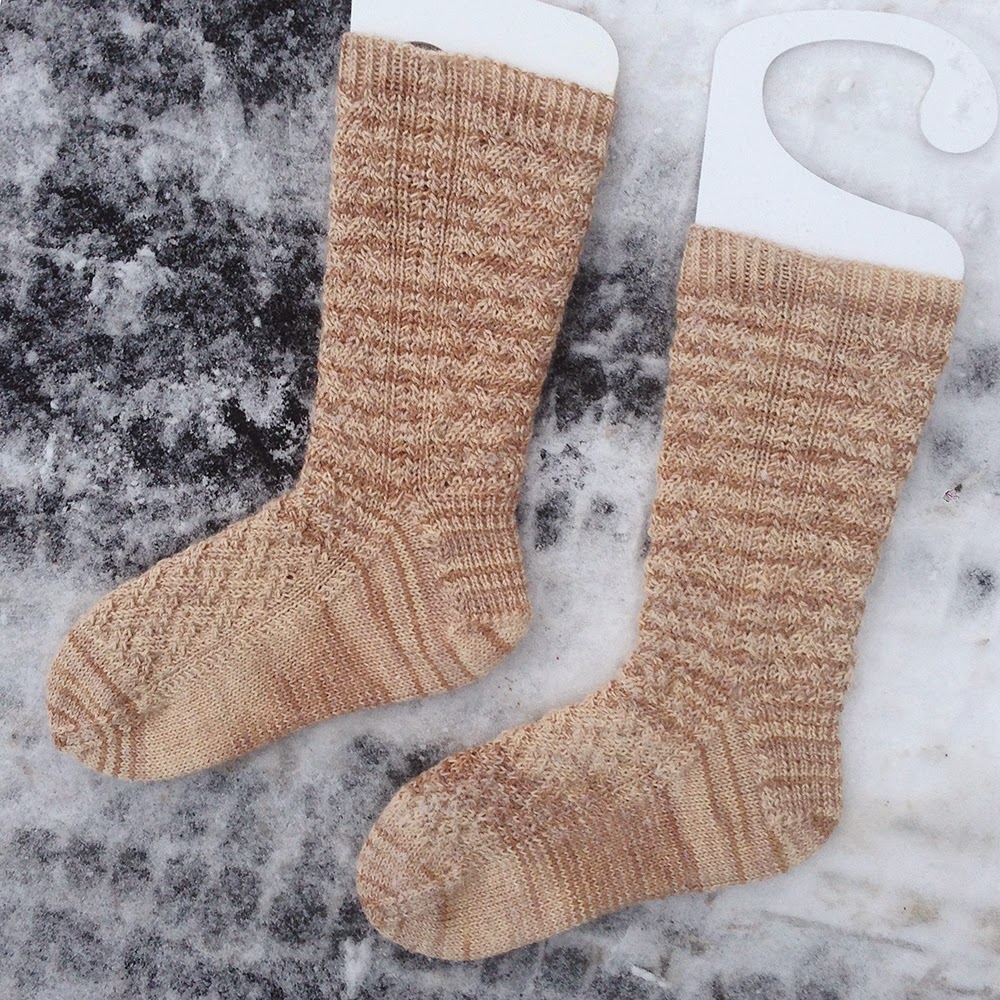 There are two charts for the leg. It's actually the same cable pattern for both but the second chart is offset by half a vertical repeat. How nice is that?! For the right sock the order of the charts is reversed so that the pattern is mirrored. Love that too!

The more this sock grows, the happier I am with the yarn choice. This "Wisdom" colourway of Sock Luck yarn shifts from cyan blues through navy to emerald greens. After working the cuff and starting the first set of cables I worried that the colourway was too busy for the pattern, but the further I knit, the stronger the pattern emerges. Looks like this time I'm being rewarded for ignoring early doubts!

I'm also pretty happy with being back to knitting a Cookie A pattern. The patterns are often pleasingly complex with such nice little details and embellishments - like the way the cable pattern finishes at the heel on a diagonal... so clever! And considering the first shipment of the Cookie A Sock Club is expected to arrive in the next few weeks, being in a Cookie A frame of mind is a very good thing!

Of course the reason I'm back to knitting my Stalagmite socks is that I finished my Inlay socks for the Hunter Hammersen KAL over at the Sock Sampler group on Ravelry. It's a very striking pair of socks but all those twisted stitches made the knitting a tough slog. Suffice it to say I'm glad to have them done :)

Posted by Minding My Own Stitches at 8:43 AM 11 comments: