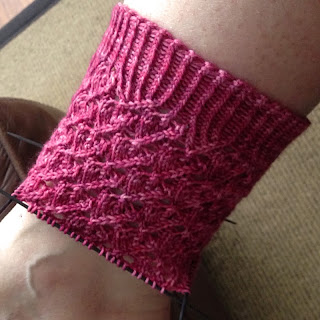 Now that the craft show has come and gone I hope to spend more of my time knitting socks. That's one thing that has become really clear to me with so much going on and so many deadlines - I'd rather being knitting socks than doing almost anything else.

So far the trickiest part of this pattern has been the cast on - and that was tricky only because I'm more of a visual learner than one who learns from written instructions. Once I found a couple of YouTube demonstrations, I was away to the races.

The leg of this sock is quite short, so after just a handful of inches I'm nearly ready to start the heel flap. I considered making the leg longer but decided against it. Arguing against is the fact that the pattern isn't that stretchy - I doubt it'd stretch over the calf nicely and still fit snugly at the ankle. Besides, I've heard the pattern eats yarn, so adding more repeats would really just be tempting fate, wouldn't it?

The pattern is quite cute. I had feared it'd be really lacy with all the yarn overs I'm doing, but it's not. Maybe the chilly temperatures these days are influencing my tastes? I just want thick, warm and comfy socks. The weatherman is warning for snow squalls on the drive home today! Ugh.
Posted by Minding My Own Stitches at 8:40 AM 11 comments: 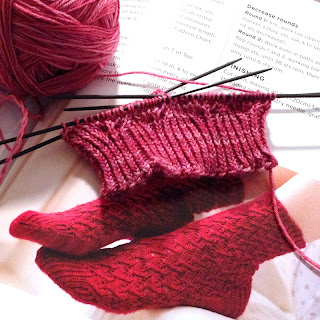 Thursday morning I finished my Vorticity socks with just inches of yarn to spare and just a few hours left in the Wandering Cat Yarns KAL. If you're curious, they're blogged here.

It's always fun to cast on a new sock pattern, and today it was even more fun, as it involved a new (to me) cast on method. The Channel Island cast on gives a stretchy edge to the cuff and every other stitch has a little bump that makes the edge look almost like picots. For this sock the cast on is made with just a single strand of yarn but some of the YouTube tutorials show the Channel Island cast on with two or three strands for a really pronounced decorative edge. Cool!

The pattern is written in small and large sizes. The yarn I've chosen - Sock Luck from Studio June Yarn - is a light fingering so I'm knitting the larger size on smaller than recommended needles. Hopefully the sock size ends up somewhere in the middle :) This colourway features tonal pinks which will work nicely with all the heart motifs. Besides, it's stash yarn so it's nice to finally knit it up. I did read that some Ravelers ran short of yarn, so the fact that Sock Luck is put up in 460 yard skeins is another point in its favour. No need for another game of yarn chicken quite yet!

Now hopefully I can find some knitting time between now and next Sunday so that I can show you the heart pattern. It's not looking too promising because I really ought to be spending every spare moment preparing for a craft show next Saturday. Somehow, though, I'd rather be knitting socks.
Posted by Minding My Own Stitches at 8:08 PM 14 comments: 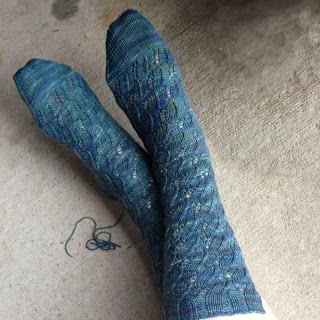 Modifications: Based on project notes from other Ravelers mentioning how large these knit up, I shifted down one needle size for the leg to the bottom of the heel flap and then shifted down another size smaller for the foot. Also, I added some length the heel flaps. 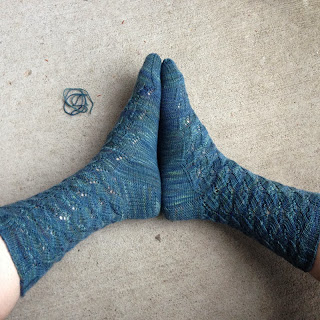 This is my first time knitting with Twisted Top Cat. It's an MCN sock yarn but with more twist than their usual MCN base. The extra twist leads to lovely stitch definition and it's also likely to make these socks more hard wearing, but it does take away from the softness of the cashmere. Still gorgeous yarn, though.

The pattern is my favourite so far from all the socks I've knit from Alice Yu's book Socktopus. It looks really complicated, but it's actually pretty easy once you sort out the first repeat with its changing stitch counts from round to round and shifting beginnings of rounds. I finished it yesterday morning - well in time for the Socktopus KAL prize deadline and just in the nick of time for the Wandering Cat Back-to-Socks KAL prize deadline. If I'd had to rip back on sock one, I probably wouldn't have made it in time for the latter.

Happy Friday one and all. It's a wet and windy Friday here, so surf's up on the Lakes! That's where you'll find Gavin today, I'm sure. It's also Finished Object Friday over at Tami's Amis, so make sure to take a few minutes to have a look there!

Posted by Minding My Own Stitches at 8:35 AM 18 comments: