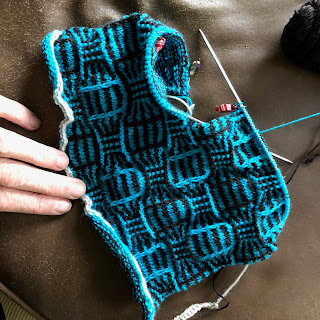 My focus lately has been my Feny Socks for my October 2018 Paper Bag Project, but nothing about this has been easy.

First it was the needles. The sock is knitted flat from the top of the leg to the end of the instep, working around the leg. My sock needles are not nearly long enough for that many stitches (107) so I definitely needed the recommended circular needle. 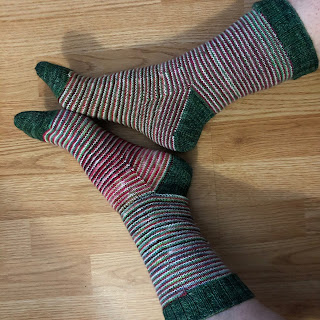 I balked at ordering the needle online - I didn't want to pay for shipping and I wanted to see and feel the needles before I shelled out for them. I checked Lens Mill Store in Port Dover but the quality of the needles put me off - I don't love knitting on circs, and I absolutely a with abhor blunt needles with clumsy joins. I struck out for the same reasons at Wal-Mart. I had high hopes at Michael's Arts and Crafts but the clerk explained that they were in the process of switching suppliers and had no sock sizes available and no sign of that changing any time soon.

After a couple of weeks wasting time on a hunt for needles I gave in and bought Addi Turbo Sock Rockets at the lys - the Needle Emporium. They were waaaaay more money than I was hoping to spend, but at least knitting with this circ is as pleasant as can be. So imagine my reaction when I reached the pattern instructions that directed me to divide the stitches, placing a number on a second circ with further instructions for the third circ. NO. Just. NO. Even if I have to use waste yarn to hold stitches here and there, I just will not shell out for 2 more circular needles. I guess I should have read the materials list more carefully. GAH! 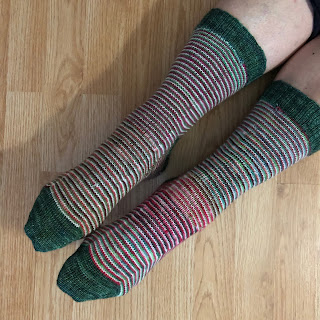 As of this morning I'm 1/3rd of the way into the final repeat of the chart after which I graft the leg together into a tube and pick up stitches for the heel and the bottom of the foot. Which is to say, I should know soon whether the sock will fit or not. Obviously I'm hoping that the fit is perfect and that it's enough to re-energize me to complete the first sock and work the second sock. Geez, I hope so, otherwise I'm not quite sure what I'll do!

In the meantime I did finish my Christmas Monster socks using the Stash Buster Spiral Socks pattern. The Instagram KAL wraps up October 31st, so that's my final entry for #monstersockkal2018. The socks are very fun and were a great way to finish up a bunch of sock yarn scraps. You know, I think I might like scrap socks more than anything else!

And yep, Nain has still been ignored! 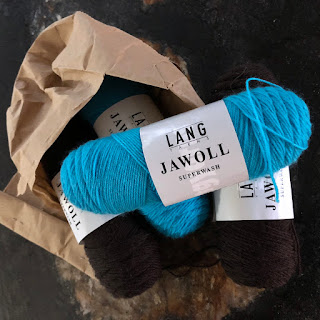 This past Monday I pulled a paper bag from the diminishing pile to find the yarn for Feny Socks as my October 2018 Paper Bag Project. These socks promise to be interesting - the legs and insteps are worked flat in Mosaic colourwork starting from provisional cast ons, grafted into tubes and then joined with cuffs, heels and toes worked in the round.

I'm eager to get started however I don't have the needles I need! My shorty sock DPNS won't cut it for this. I checked Amazon however I am loathe to pay as much as the needles are worth in shipping. Instead I'm trying to give some thought to when a purchasing opportunity may coincide with my schedule next week. There's a Lens Mill Store in Port Dover - that might be do-able as the KIA needs an oil change at the dealership in Port Dover. Also there's a Wal-Mart in Simcoe that I drive past on my drive to and from the cat rescue, so that's my back-up idea. 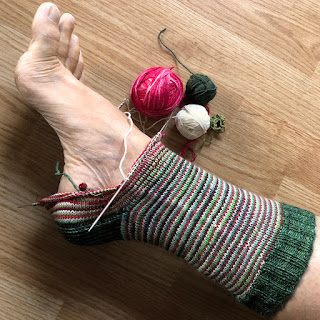 After knitting scraps for the last several weeks I'm also excited about casting on this gorgeous Jawoll sock yarn. I just love both these colours and I hope I love them just as much in combination. In general I have to guard against overly conservative matchy-matchy colour choices, so here I've tried to make sure I have lots of contrast.

Inspired by @danaraeknits' Christmas themed Monster Socks in greens and reds, I've pulled red, green and white yarn scraps and cast on. I'm using the pattern Stash Buster Spiral Socks, and WOW is this brilliant for using scraps! You carry three different yarns throughout the leg and instep, but each yarn is knit across a needle (or two) until you meet the next yarn - no stranding, no fuss, no bother. The result is these perfect stripes in three colours. How festive is that! I had been considering buying some Christmas themed sock yarn but these socks have entirely satisfied that urge. Who knew that such a festive pair of socks was hiding amongst my scraps?

I'm using Russian joins to connect one scrap to another so there won't be a dreadful amount of finishing at the end. I expect to squeak out a pair before running short of white and red, so these festive socks won't be repeated. After knitting the section around the heel I decided to eliminate that red yarn from the remainder of these socks... it's somewhat thicker than the other sock yarns and as a result is overwhelming the white and green that its knit with. I'm leaving it as knit - these are, after all, Monster Socks and que sera, sera.

We're headed to my sister's place later today for a Thanksgiving dinner, so I hope to complete the first sock and start the second on the car ride back and forth. I expect to be knitting these monogamously, at least until I find needles for Feny. The KAL continues until October 31st. Just pick your scraps or minis and post with the hashtag #monstersockkal2018.