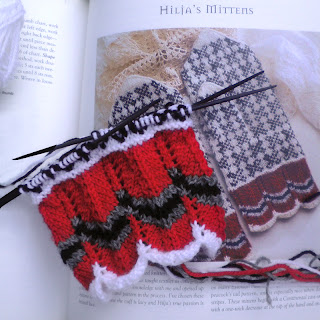 It's a bit late in the day for this post - my apologies for that - but I delayed until I could at least show you this first project cast on. Then I delayed until I could show you all four colours. After which I thought, well maybe I should finish the cuff first? Which then led to the idea of holding off until I had worked a few rows of the hand chart. And that's where I find myself now. With fading light I figured I'd better post now, if I was still planning to post today at all!

This year I've elected to knit through the book "Folk Knitting in Estonia" by Nancy Bush. As part of my commitment to Surmount the Stash, I pledged to do a better job of knitting the patterns already in my library. I've owned this book for a few years now, and cracked it open for the first time today. There are twenty-six patterns in the book - a mixture of mitts, gloves and socks. The patterns are arranged in alphabetical order, so I feel no imperative to follow the pattern order set out. Instead I decided to start with Hilja's Mitts. Two reasons for that. First, most of the other patterns call for size 0 (2mm) needles which will still be in use for my Dragonfly socks for another couple of days. And secondly, mitts are a nice change from socks and an easier project to start with than gloves.

Now that chart for the hand is calling me! I can never resist a stranded colourwork chart. Although twenty-six patterns seem like an imposing list, I think I might just get through it. I guess we'll have to see as we go along!

Posted by Minding My Own Stitches at 8:54 PM

They are beautiful! I love red, black and white together.

It's nice, okay I am not a big fan of this kind of mittens, but I love your post. So funny, the "Just a little bit more". In my case is more just one more row before to go to work and now my coworkers are sure I do my jogging on the way.

After all that you accomplished last year I bet you'll have no problem! I think the colors look quite traditional (although I don't know anything about Estonia so who am I to say!!). Thanks for introducing me to YoP. I'll be joining everyone in the next day or too! Have fun and Good Luck!

those are gorgeous!! i cannot wait to see the finished product!! awesome!

I'm really looking forward to seeing you work through this book. I've seen one or two Estonian patterns and the colours always look amazing so I'm really going to enjoy your book. I love your going to pick your patterns random and what a great start. The colours look amazing.

Those are so beautiful, I really admire the skill that goes into this sort of knitting and will love watching these projects grow.

I'm really looking forward to watching you work through a book again this year! The mitt looks wonderful so far and I'm always impressed by your stash busting ways!

Love these mitts!! Hey the "just one more row" motivation works well :-P Doesn't make anything outside of knitting productive but who cares, right? :) Good luck this year!

On my so beautiful as always! I can't wait to see all of your finished products.

Also am impressed by your Surmount the Stash goal. That will be my next task after I get all my WIP done....

Awesome, can't believe you're that far already. You're like a machine or the everready bunny or something. lol Best of luck as we all embark on our mission of year 2.

Love the mitten so far, wonderful colours ! It will be fun to see all of your other knits for the coming year if this first one is anything to go by .

oh, I love color ork. I need to improve mine, desperately. I am reading Nancy Bush's Knitted Lace of Estonia, this week.

The colors are so dynamic together! I love how you pick a book and stick w/it.