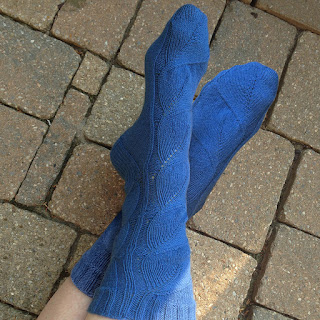 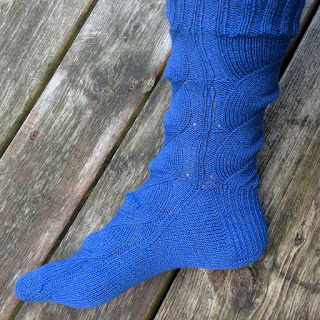 This week's good news is that both my July and August Vanilla Socks for Charity are done - and each got their own post earlier this week. Which leaves us the second pattern from the August shipment of the Cookie A sock club to discuss...

... Darjeeling Socks. Well, I knew when I saw the pattern photos that the fit of these socks would be a challenge - they look ill-fitting, stretched in spots and baggy in others, even in those photos. The designer comments:

"The pattern on these socks biases a great deal and causes the sock to pull in horizontally, making for a tight fit. Try on for fit after each repeat. Use a larger size needle on the leg and transition to smaller needles on the foot if needed. The largest size is intentionally shorter for yarn usage and fit." 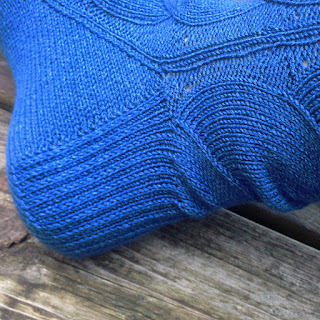 I tried going up a size but the large was ridiculously baggy. So I tried going up a needle size or two, but the stitching was loose and flimsy looking. So finally I decided to go with stretchy yarn - CoBaSi - with the hope that would help. I swatched with this a couple of different ways and found that working the YOs tbl (which I prefer to close up the holes) actually helped to reduce the puffiness in the leaf pattern and helped to reduce the biasing. Additionally I worked the ribbed cuff at the larger size and made it longer with the goal of reducing the stretch and distortion of the ribbing. I also decided to add stitches with lifted increases as the pattern approaches the section that pulls tight, and then decrease those added stitches back out as the pattern relaxes. And finally I decided to work the first half of the repeat twice rather than mirroring it around the leg hoping to mitigate the biasing still further.

As a result I have a finished pair of socks that I can put on and, with some pulling, twisting and tugging, I can make them look nice in a photo or two but the fit problems remain insurmountable. Despite adding 12 stitches to each round through the tightest sections of the pattern, the socks still bind at the end of each leaf and the beginning of the next. And no matter what I do the middle of the leaves still bulge out. Even with a bigger, deeper cuff, the ribbing is still pulled and distorted at the beginning of the pattern.

The good news? This yarn is awesome! I had heard good things about CoBaSi on Ravelry but until recently I wasn't able to find it locally. And when I saw it in person, I had my doubts; in the skein it's not soft and looks splitty. But it knits up surprisingly nicely, the stitch definition is awesome and the knitted fabric feels great. Add to that its relatively cheap price and I'll definitely be buying more of this. And you guessed it, I'll be frogging these socks to recover the yarn, because I've no use for a poorly fitting pair of socks. Time to move on!

Posted by Minding My Own Stitches at 11:06 AM

Don't blame you for being unimpressed. The top photo looks awesome, the other two show the bad fit. Think I'll give these a miss.

That yarn really does give great stitch definition doesn't it, it is so obvious in that third picture and I love the colour you chose. I'm sorry to hear you have to frog them specially after all your modifications and I suspect that if you couldn't make them fit and look decent no one would be able to and life is way to short to have a pair of ill fitting socks!

That's frustrating! But I applaud you to seeing it through to the end - I never would have been able to! But that is the great thing about yarn - it's totally recyclable!

I'm amazed at your efforts to make these socks work. In the first photo they look great, but man are they ill fitting when you see the other pictures. Good idea about frogging and reusing the yarn. I love the color and you're right the stitch definition is great.

If you can't make a sock pattern work, then no one can!
That is quite an odd pattern.
Thanks for the yarn review though. One of my LYS's carries that yarn and I've wondered about it.

You, "oh greatest of knitters" (in my book anyway)....if you can't make it work then it was a bad, bad pattern! They look beautiful but I am all about comfort and if they don't fit well....out they go! It is too bad after making both of them but good news about the yarn!

What an odd pattern! Your top pic looks fab, but I applaud you for persevering. And to frog, you have to, you can't have that gorgeous colour yarn sitting being unused!!

In my opinion, if a designer needs to add that many caveats to a pattern, it's a poorly conceived pattern. I would expect better from a Cookie A.

However, that said .....the socks in your photo look very pretty.

Well, how disappointing to work so hard and still have ill-fitting socks. Though I am majorly impressed at your persistence. The yarn is beautiful, indeed!

Aw, man. All that work for that? I would have quit after sock one. That is a brilliant blue though. I will look more into that sock yarn brand.