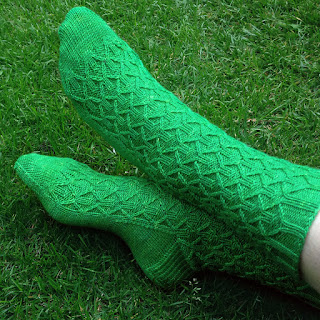 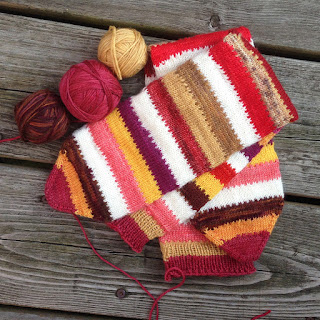 Of course I did finish my Green Gable Socks ... and aren't they lovely? Although I didn't like the yarn's original "lemongrass" colourway, I'm pleased as punch with the kelly green I got after an immersion dye with Wilton Icing Color. So that's the first of two August Sock Club patterns done!

And my July Vanilla Bean Striped Socks are also off the needles, awaiting afterthought heels. I promise to get to these this week! These are knit entirely from scraps, with Russian joins at the colour changes, so there isn't much finishing to do except the heels.

I'm making good progress on my August Charity socks - vanilla ribbed socks. I'm just about to turn the heel on the first sock. You'll just have to take my word on this; I left this project in my desk drawer at work on Friday.

Last but not least I've made a start on the second of the August Club patterns, Darjeeling Socks. I've swatched, and I've ripped back three times, and enough's enough. These may end up being the most ill-fitting socks I've ever knit. Hopefully when I get the first sock of the needles I like it better on my foot. If not, I'll soldier on, post finished pics and then frog to reclaim the yarn. What an awful thought!

We've just got back from a weekend spent with friends at their Lake Erie cottage. I'm a little sunburnt, a little overtired, but getting out of the city somehow makes a weekend feel twice as long. Now I just need to get caught up on my chores!

Posted by Minding My Own Stitches at 7:25 PM

The green socks are stunning! Well done! The vanilla scrap socks are cool and why didn't I think of a Russian join when making my scrap socks? Great idea and I will use it on my next pair.

Lovely sock pictures!
I can hardly even imagine making a pair of socks just knowing I a.m frogging it when I am done... That is crazy.
See you Tuesday at second cup?

Beautiful green socks and I love the stripey ones.I'm sorry about the new socks, I'm not sure I would have the heart to carry on in order to frog. I admire your tenacity!

You know I'm looking at the green socks, trying to imagine them in that pukey yellow originally and can't, it's just not happening. That's no bad thing and they turned out so gorgeous! I love the stripes socks and I spy matching stripes all the way down, I was aiming for this with my pair.

I had to Google "Lake Erie cottage" just to see what rentals looked like. What a nice variety and good prices too. Sounds fun. LOVE your green socks. Want to steal those. And the vanilla scrap ones are charming, like a turtle transition from summer to fall. Sorry you're having such a time with the Darjeeling. That sucks you're going to knit them and then frog. Yikes.

The color redo came out great! I love the color and the pattern works so well with it. Congrats on turning an iffy yarn into something you love!

Still loving those green socks. And the Vanilla Bean scrap socks are so pretty. It's hard to believe, looking at those, that they are made entirely from scraps! And your post reminds me...I must give this Russian join a try on my next multi-colored project. :^)

How clever you are! I've heard of using jello, but not wilton. The kelly green really is pretty.
Getting away is good for the soul -- and the brain!

More gorgeous socks! How do you do it? I disappear for a few weeks and you manage to knit up more amazing socks. Love the green, so striking! And the Vanilla Bean socks looks so cute!

Wow...and you feel nervous about my brioche hat. You have fabulous sock knitting skills. I'm sticking to your blog. I love the layout. Consider me a new 'knit-fan stalker.' Those green socks are unbelievably gorgeous. What size shoe do you wear...lol.