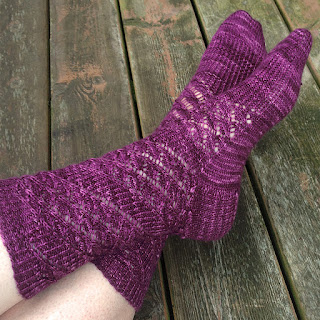 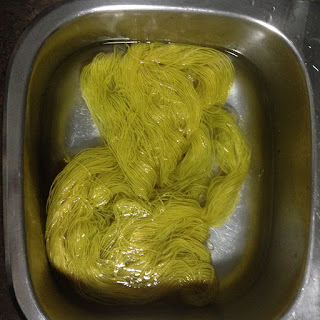 Realizing that I'd done the reverse yarn overs incorrectly was a set back last week. And no, they're not difficult, it was just a dumb mistake. Must Read All Instructions More Carefully!!! But finally these Revolution Socks are done. And just in the nick of time ahead of the release of the August Club patterns tomorrow. The pattern was a fun and interesting knit, but I'm not particularly fond of the finished socks. They are just too hole-y in my opinion. Maybe if my feet and legs were more tanned they'd look better? 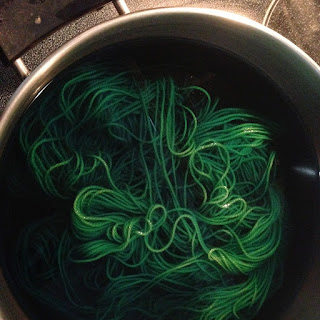 The yarn - Socky-Talky by The Dye-Guy - was lovely to work with. It's soft, smoothy and pleasingly plump and springy. Hopefully it washes and wears well without pilling! And I'm very happy with the colour too - lots of subtle variations in the purples without any pooling. The yardage was extremely generous too! Although this pair of socks used 104 grams of yarn, I still have almost 30 grams left!

August club yarn arrived late last week and what a disappointment that was! It's yellow which is not good for me; I'm generally not a fan of most shades of yellow. But this is a particularly awful shade of yellow - a dull, dirty yellow with greenish overtones, sinus infection mucous colour. Another Raveler compared it to "Gastric Suction" ...... eeeeew!!

No sooner had I unwrapped it, I rewrapped it. It's just too ugly to see the light of day in my home. I tried posting it for sale or trade within the club but after reading the many posts from others with similar feelings about the yarn I quickly realized that there was little chance of finding a buyer. Besides making the arrangements and sorting out the shipping is a bit painful. So I deleted my sale or trade post and contemplated my next steps.

Why not overdye it? Gavin suggested. Good thinking! So that's exactly what I did yesterday evening. I googled this tutorial and followed it step-by-step exactly as demonstrated. When I overdyed the pink socks in February/March I used a microwave method, however I prefer this stove top method - I felt more confident and more in control, particularly as I was able to obsessively check and adjust the dye bath temperature with a meat thermometer. It certainly worked like a charm. The dye bath was completely exhausted and the overdid yarn rinses entirely clear. Thanks to a teal shade of Wilton Icing Color, the awful yellow yarn is now a much more palatable green. Admittedly the final green is brighter and yellower than I had hoped but at least I don't hate the colour now. Much better!

In the meantime I'm plugging away at my second Vanilla Beans Striped sock. With any luck I'll have another finished pair of socks to show you next week!

Posted by Minding My Own Stitches at 9:39 AM

I was excited to get my bright yellow sock yarn. I mean, Yellow isn't exactly my color either but I make exceptions for things like socks because they're on my feet and it's rare that they're seen. It's kind of like a little secret: I'm dressed all work-esque but I have these crazy bright handknit socks under everything :)

I may or may not have purchased it from you, had I been paying attention. But I do like the overdye, too :)

The over-dye turned out really beautiful!

I get that you used frosting dye for the color, but do you have to use a mordant too? Sometime I'd like to try dyeing yarn, but it seems so SCARY!

Ohhhhhh over dying, now there's a thing.... personally I'm a bit for and against yellow, I like the yellow I knit my hulst socks in, the kind that's like sunshine but we once painted our hall a yellow that had a lot of those greenish undertones to it and when the light was on in the evenings the walls looked puke colour, much to my husbands amusement I wouldn't turn on the light in the evenings instead opting for a lamp at the top of the hall, lets just say it got painted in the next round of rooms for painting so I can understand the desire to get rid of that yellow! but I do love the green so much nicer, now I'm looking forward to seeing the next sock pattern to go with it.

What a great solution for some difficult yarn. I'm afraid I would have thrown it into the never ending stash and walked away for a bit. Now you'll end up with a great one of a kind color for a new project. Congrats!

I quite liked the yellow on my screen, but you made it sound so gorgeous! The new colour looks splendid though.
I really like revolution, hope they grow on you!

Your purple socks look great, a bit hole ridden, but still lovely. Fabulous idea to overdye the yellow yarn. I actually quite like yellow, but I agree that shade is not appealing.

lol to your description of that yellow yarn color. Here I thought it looked almost chartreuse - and that's a favorite color of mine. But overdyed it looks great! Glad you're happier with it. And thank for the inspiration to maybe try this over-dyeing someday. Sounds like a fun thing to try.