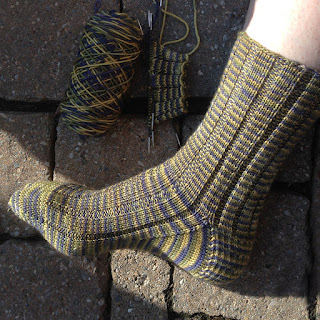 Yeah, despite my promise to finish the heels on my July Vanilla Bean Striped Socks, I still haven't got around to that. Apparently I need a kick in the pants! Oh well, I promise - cross my heart and hope to die - to do them today. Definitely!

At least I remembered to bring my August Wide Rib Socks home from work this week. As you can see from the photo, sock one is done and sock two is on the needles. I had a brief moment of panic when I suspected I was running short of yarn on sock one, but the admin office postal scale confirmed that I should get sock two done with a couple of grams to spare!

The jury is still out on the colourway. It's still loud but I don't hate it. Gavin says it reminds him of a stretchy metal watchband strap, which is kind of interesting. It's also interesting to see how the colourway settles down into wider stripes through the gusset where I have all those extra stitches in the round. I think I'd have preferred the whole sock like that, but it is what it is.

Much of my knitting time in the last week has been spent on the second pattern for the Cookie A Sock Club - Darjeeling Socks. Now that sock one is off the needles I'll admit to liking it more than I did before... or more accurately, disliking it less than I did before. I still don't think I like it enough not to frog them once they're done. The fit is really problematic! That's a discussion to be had and a decision to be made next week; sock two should be off the needles by then.

It's hard to believe that summer is almost over, but the CNE started this weekend and that's a sure sign! Gavin and I are thinking of going next weekend. I'd like to see a HorsePower Live show, might check out the Arts, Crafts & Hobbies Pavilion, the Gourmet Kitchen Pavilion, and grab an Ice Cream Waffle. And then just walk around and people watch!
Posted by Minding My Own Stitches at 9:56 AM

I love Gavin's description of the sock! I have to agree with him.
Wish I could tag along to CNE. It sounds like a ton of fun!

I like the wide rib socks and I think your husband's thought of their looking like a stretched out watch band is right on the money.

I'm amazed you are going to finish sock you dislike so much. I wouldn't have the patience for it.

I can completely see wristband stretchy metal in those socks and that makes them interesting, yayyy to less dislike but as you say fit that's something that cant be over come.

I really like the colour of your finished sock, very unique.

This colorway goes very well with the wide rib pattern. I don't know what it reminds me of although the yellow of fluffy bees kind of comes to mind. This show sounds and looks fun. I'd be chomping at the bit to get into that arts and crafts pavilion to "maw" the goodies.

Love it, can't wait to see the pair and the next instalment.

Those socks look like they were custom made for you...oh yeah...they were! LOL! What I mean is they look like they fit you to a T. As for your Exhibition choices...I am right there with you! I love horses, arts and crafts, kitchen stuff and an ice cream waffle....YUM! I've never had one but I may have to recreate some here at home. Interesting history of it too. Have fun and tell us all about it when you get home!

I love those pictured socks. I love the yarn and the pattern. Very pretty. Elegant, even.

I like the colours in that one - very steampunk-esque!

I rather like the colours, actually, and I think the simple pattern sets off the colours really well!

Good luck with those Darjeeling socks - really hope the pattern will grow on you and you won't have to frog them...