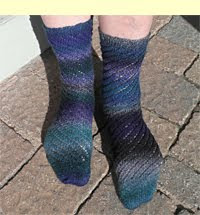 They're not identical twins, these Soft Serve socks, that's for sure. But they're definitely a closely related pair. As you can see, the second sock is done. I'm happy with them, kind of, but I wouldn't knit this pattern again. Not because I screwed up the second sock twice before finally getting it done. But because, although the swirling of the pattern looks nice, it makes the socks irritatingly uncomfortable. No matter what I do the socks feel twisted; I'm constantly wanting to tug at them to straighten them.

I'm also happy with the yarn, kind of, but I wouldn't buy it again. Not because of the non-matchiness, but for a couple of different reasons. It's not the softest yarn - the pattern feels a bit scratchy across my instep. Not uncomfortably so, but there are so many softer, nicer more comfy yarns out there. Mostly I don't like all the grey twisted in from one colour transition to the next. The best parts of this colourway are the blues, green and blue/green twists.

Enough moaning; I think I'll cast on something new!
Posted by Minding My Own Stitches at 9:13 AM

It's a shame they aren't comfortable because they certainly are pretty.

As for the scratchy --- try rinsing them with hair conditioner. It made my Noro socks MUCH softer.