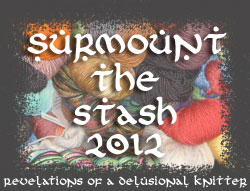 We're now two months into my year long commitment to Surmount the Stash in 2012, so it's time for another report card. Let's see how I did this month!


Monthly budget of $50 for all knitting related expenses: I spent $20.00 for the grey wool from Dutch Hollow Acres for Susie Rodgers Reading Mitts + $6.00 for the Windscheif pattern + $4.50 for the Koolhaas pattern + $10.02 mailing costs for a SIBOL square and a chemo cap + $31.08 at the Purple Purl for a retracting measuring tape and a skein of sock yarn + $23.56 at Knit-o-matic for highlighter tape and some Debbie Bliss Cashmerino =$95.16. Remembering that I was $0.98 over last month, I'm now $46.14 over budget. That's not very good, is it? To get back on track I'm pledging not to spent one more cent this month.


Manage my WIPs: Once again I've been disciplined about starting and finishing things. Three hats and one charity square were completed and shipped to charities. Another two baby hats have been knit and are awaiting donation. It felt like I was starting and finishing something about every other day through February and now, on the first day of March, there's one last sock on needles that'll be finished before I leave for work this morning.


Plan projects to work through my inventory of yarns in my Stash: This month there were a few yarn purchases and pattern purchases that weren't strictly necessary. As well, for much of the month my projects were in sock and baby yarn - stash busting goes much more slowly when the yarn is so fine! I didn't make any scrap yarn socks last month and just one dishcloth - I can and will do better this month.


My conclusions? The grades on this month's report card have definitely slipped when compared to last month. Time to recommit and see how what I can accomplish in March.

Posted by Minding My Own Stitches at 7:42 AM

behind the ivy said...

Fingers crossed for getting back on track in March!

I love the idea of a pattern budget. I tend to buy patterns on a whim so I never really keep track of how much I've spent. I'm usually pretty shocked when I finally do tot it all up!

I wish I could have hopped on this...and there's no saying I can't.

My stash is a little out of control. Of course, with the possibility of moving across country looming over my head, I may just wind up selling some stash. We'll see...

Don't be too hard on yourself. The patterns were used for charity knitting and in the end you enjoyed the knitting! I am trying to commit to no purchases in march, but there is supposed to be a jaunt to a yarn shop, so I doubt I will make that goal.

My stashbusting plans have gone all awry! I bought 4 balls of felted tweed on ebay, 8 balls plus 4oz fibre in Vegas and I may have also just purchased 10 more balls of a discontinued yarn I love from a destash...

March is another month!

I should join the surmount the stash group.

I've been pretty good since the year started but caved a little in February when I had to buy yarn for blanket I'm doing for my bff's soon to appear baby. I ended up with 3 skeins of Lamb's Pride Bulky in Teal and 2 skeins of Malabrigo in Rasta. Yikes ...

All you can do is commit to start fresh in March.

I went way over my budget (of $0.00) and spent $160 at Knit Picks. All of it except one skein was for planned projects but I tend to have grand ideas and then when it comes time to knit them I balk. Also, looking at my stash, it is embarassingly rich. I am contemplating letting my sister shop it when she visits next month...err later this month. March already!

I think as soon as I committed to knitting down the stash, I found so much stuff I just "had to have". LOL

Guess I don't do any better on a yarn diet than I do on a food diet.

I am with you about recommitting! I imagine this is going to get much harder as the year goes on...