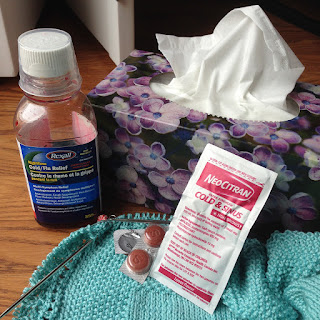 Almost the entirety of last week has been lost in a sniffy sneezy flu-filled coma. Not a single stitch has been added to any sock project. Trying to knit from charts makes my head pound.

The only project that's seen any progress is this blanket for my cousin's baby, due mid March. The centre stockinette square is complete - although I abbreviated it to a slightly rectangular shape to leave enough yarn to complete the borders. As you can imagine, with 620+ stitches in each round, border progress is slooooooow. Slow but steady wins the race though, right?

The good news is that I'm emerging from the fog of illness. My temperature was nearly normal all day yesterday and today, so far, I'm fever-free! The bad news is that Gavin is showing signs of coming down with the same thing. So it's soup and hot liquids for the foreseeable future around here. And lots of blanket knitting!
Posted by Minding My Own Stitches at 8:45 AM

So sorry you (and now Gavin) aren't feeling well. Hope that flu-bug leaves you soon.

Well .....at least you slogged through more of that stockinette. I guess that is why it is always good to have a simple pattern on the needles too.

Boooooo to the sickies! I hate when I get sick and can't brain anything :(

Hello, sister in sickness. This flu stuff is really a bummer! I'm glad you're seeing the light at the end of your tunnel -- just in time to become a nurse!

Oh no, hope you are well and truly on the mend now. We have had it here but luckily myself and my youngest are protected by the flu jab - the other two, not so. Hope you're all better soon and can get lots of that blanket done.

So sorry to hear you've been so sick, Lynn. That baby blanket is most awesome.

Oh no! I'm sorry to hear your ill and I really hope your over it soon, Gavin too. Your doing great on the blanket, I'm not sure even if ill I'd be able to do that.

Feel better. I know a friend who has been off work since Feb 8 with a cold/fever;pneumonia. She's only in her 30s and she's been hit hard. Get better soon!!!!

Oh you got the plague! Everyone I know is getting it. Dave had it right after me. and every other week a couple of people are out of work with it.
Hope you feel better soon - rest as much as you can. And good healing thoughts to Gavin!

Man, you two get hit with colds more than our crew and I've got kids that visit a petri dish of germs 5x a week. I'm sorry you were ill. I have taken so much Nyquil in the past that it's ineffective for me. I now rely on Theraflu. Keep going uphill on battling that bug. Sorry the husband is coming down with it.

I am so sorry you've been sick! Hopefully, you are well by the time you read this and I hope Gavin is too. I see the blanket...so nice and love the color. It's warm here...warm enough to be out weeding and scrubbing mold off the sidewalk and all kinds of maintenance before the Spring monsoons and heat come! LOL! I hope you get back to your sock knitting soon as I know how much you love it! Take care...both of you!
P.S. Have you seen the hysterical video about Canada running for U.S. Presidency in light of all the goofballs that are running here? I laughed so hard because at the end of it the guy is building a wall to keep all the Americans out because there will be so many flooding across the border. Probably not far from the truth! LOL! I've already asked for asylum! LOL!