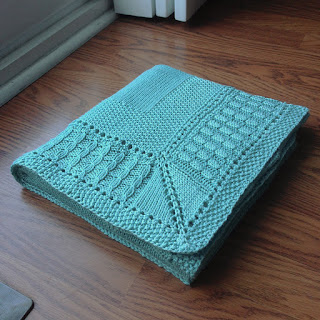 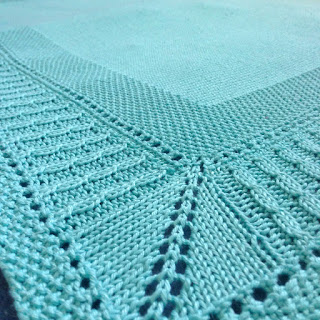 Over the last several days the blanket border was knit on 4 circulars, making it hard to visualize off the needles. Late Thursday, once the final stitch was bound off I was excited to spread it out to see the finished blanket. But excitement switched to dismay and disappointment in a heartbeat - the borders were lumpy and distorted the centre panel. Oh no!

My first instinct was to rip it out and start over with another pattern. "You're nuts", said Gavin, "it looks fine." Hmmmmm.... maybe a clear head and fresh eyes were needed? I consoled myself by setting the blanket aside and cruising through alternative patterns on Ravelry, just in case.

The next morning I wasn't quite as unhappy with the blanket. There were some parts of it that I was happy with, and folded this way and that, it didn't look bad. And maybe, just maybe, I'd like it more after blocking? Yes, let's wash it, dry it and then decide.

Note to self: never underestimate the miracle of blocking. A trip through the wash was just the ticket to relax the borders and smooth out all the lumpiness. The blanket now drapes beautifully! Phew! I am soooooo much happier with it now!

A couple of things I should mention:

• the yarn is Cascade Ultra Pima. It is a dream to knit and after blocking it drapes beautifully - there is no woolly springiness to it! If you use this yarn though, do take time to block your FO. Not just to smooth it out, open it up and improve the drape, but also because it shed an astonishing amount of lint on that first wash!

• as written, the spindle cables were meant to continue to the corners and be incorporated into the increases but I chose to leave the corner sections as plain stockinette. My thinking was that they would finish more square and less ruffly. I think with this yarn I could have gone either way, but I like the look of it nonetheless.

• my intention was to knit a square blanket and I wrongly assumed that there would be more ease/drape in the length than in the width. Boy was I ever wrong! The blanket stretched considerably more in the width than the length with blocking and my resulting blanket is very rectangular (44" x 36"). It might have been a teensy bit nicer as a perfectly square blanket, but at least now it's so rectangular that it looks intentionally rectangular. I can live with that.

And yes, the blanket's done before my cousin's baby is due! Hurray! Tomorrow I'll package it up and send it off :)

Posted by Minding My Own Stitches at 12:35 PM

It looks fantastic! That will be treasured for a very long time.

That's gorgeous :) I still need to make one for Stormageddon. ::sigh:: He's 18 months already and he doesn't have his own baby blanket that Mama made.

That is an amazing knit blanket WOW

Oh, the finished blanket is beautiful. I have made note of the yarn and I must try it for a baby blanket. I can't imagine making anything that delicate and wonderful, but I can dream...

Yikes! I'm so glad Gavin called that one right. It's amazing isn't it just what a good blocking can do, it's never to be under estimated, truly magical. Love the blanket and I love you left the squares plain, they actually set it off wonderfully and I'm glad you made the bind off in pattern as I was trying to imagine what a picot edge would add to it and I'm just coming up blank, why add something just for the sake of it. Well done it's a wonderful gift and one I'm sure will be appreciated :)

*claps* This is an extraordinary finish! I love it. And damn, four circulars for the border?

What a sweet blanket. Yes, blocking does wonders, so why do we ever question our knitting!

Wow! That blanket is amazing. Why do we knitters so often forget the miracle of blocking.
I think a rectangular blanket is more practical than a square one, so yours is just perfect.

It's beautiful! You do such gorgeous work and the color is lovely. I have some Cascade Pima but I have never used it...maybe I will now. So glad Gavin stopped you from ripping it out...I know the feeling though...I've done plenty of ripping out.
It is just perfect looking for a perfect little new one! The recipients will be over joyed at your gift!