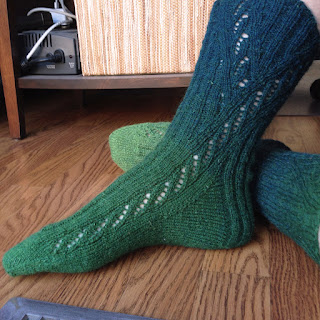 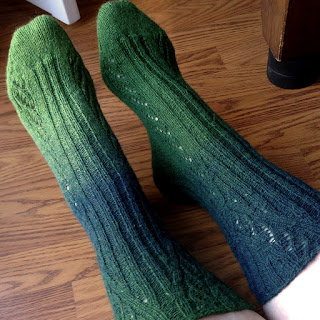 As of last night my Thelonious socks are done, and they are disappointingly non-matching. To be fair I've known since I started sock two that they wouldn't match - sock one started with a kelly green and sock two started with a dark mallard greenish-teal -  but I thought that was a gradient sock yarn cake thing. I thought that if I started sock one with the yarn tail on the outside of the cake and if I started sock two with the yarn tail on the inside of the cake, that the resulting pair of sock were supposed to match.

Not only do they not match, but as far as I can detect there would be no way for me to make them match, even if I had enough yarn to attempt it. I'll admit, I'm a bit bugged by that.

Que sera, sera. The socks are done with about 2 grams of yarn leftover. And they're really nice socks, if you can embrace the non-matchyness of them. I'm especially pleased by the length of the leg. Seems to me that Cookie A tends towards shorter legs in her designs than I like. In addition, the sample knits in the book Knit. Sock. Love. are typically knit at the smallest size, which can lead to unexpected results at larger sizes. In this case the leg was unexpectedly long at the medium size -  a happy outcome in my opinion!

Still no update on the yarn scratchiness. This finished pair is in the laundry pile - we'll see if they soften up with a wash or two. I'm not worried though; to me the yarn feels just like Briggs & Little Toughy before a first wash, so I have every confidence that a few washes and wears will be the cure for what ails them!

So what's next? The next Knit. Sock. Love. pattern I'll cast on is Twisted Flower.  Yes, I'm definitely in the mood for an intricate twisted stitches design. There's some CoBaSi sock yarn to be salvaged by frogging the Darjeeling socks I knit last year which should give me exactly the stitch definition I'm after with this pattern. But before I get to that, there are a couple other projects requiring my attention for the next week or two. With the better part of two days left on my long weekend and with temps of -25° keeping me inside the house, there should be lots of progress for my next update!

Posted by Minding My Own Stitches at 10:04 AM

I think they look beautiful BECAUSE of their un-matchyness! Congrats on a beautiful finish. That color gradient is gorgeous.

Even though they don't match - they are lovely!

I gave up trying to match my socks when the yarn isn't solid or semisolid. I'm okay with pseudomatchy socks. It works for me :)

Wow, -25°? Crazy coldness in your hood. I like unmatching socks. I see it as being organic and a bit rebellious. Happy Valentine's Day.

I could totally embrace the non-matchyness because they are both so beautiful, but I do understand being bugged about it. The Twisted Flower socks that are up next look awesome.

I think that these socks need not match. The colors flow so nicely that they have the same feel. And the pattern is very pretty. I'd count them as a success.

I think they are beautiful....but I also need to match my socks...or give myself a good talking to....I did make my zauberball socks match....

They are gorgeous in their non matchy splendour!! And the length is lovely. The gradient really shows off the pattern.

Oh SO so lovely! great sock finish!!! They don't need to match for me to love them

I like the green tones in the socks even if they don't match and although that would bug me when I'd see them, in my boots I'd soon forget and my legs would be toasty. I do love the look of the Twisted Flowers but you know how much I love mini cables and twisted stitches, I could just work on that all day long, I'm just not quite sure I'm loving the cookie A socks in general and I think from you started the Knit Sock Love book there are only a couple of socks I would actually knit myself.