what was I thinking? 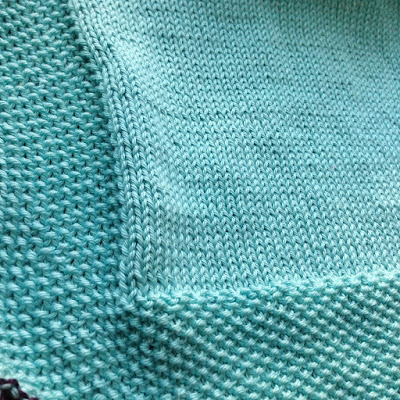 For the last few days, when I'm not knitting socks, I'm working on a baby blanket for an expectant Mom in my extended family. And wondering with every stitch about my decision-making ...

THE PATTERN: I looked at dozens of patterns but kept coming back to Sleeping Beauty Baby Blanket. I love the simplicity of it with its large centre stockinette square, seed stitch borders and ruffled cabled edges. Okay, that's the one. But if you look at the project notes there are numerous red flags about the stitch counts in the borders and the corners not adding up. And then there's that 4 square foot panel of stockinette... well that's gonna be a test of my patience and determination!!

THE YARN: Although the pattern is written for worsted weight I definitely wanted a much lighter blanket, easy to pack and carry, and which would be suitable for swaddling a baby when carried, sun-blocking a carriage or stroller when out on the town and possibly even as nursing shawl. So sport weight or DK I thought.

Another consideration was that many of the Ravellers who knit this blanket mentioned blocking their FOs quite aggressively to keep those borders from scrunching up. In light of that, I wasn't sure about a superwash wool. Hailey at Knit-o-matic suggested Pima Cotton rather than wool as it would be more inclined to drape and relax - that sounds right, so that's the yarn. Other Ravellers who used the same yarn used 4-5 skeins so I bought the last five skeins of this colour and set about casting on.

THE CAST ON: The first instruction is to cast on 120 sts provisionally. Well that makes sense seeing as I'm going to need to pickup those stitches later to add the borders, but my go-to provisional cast on is crocheted and it's really not quick. Never mind, I thought, I'll suck it up, but after casting on all those stitches and after knitting half a dozen rows I decided it was too small.

* deep breath * Yes I ripped out all of that in order to start again with 160 sts. But this time I decided to hunt around on the internet for a better, quicker more painless provisional cast on option. SCORE! This long-tail provisional cast on is way faster and easier.  So that's settled and I'm on my way.

... but remember: I bought the last five skeins of this colour and then turned around and increased the size of the blanket by a third. Yep, this entire blanket is going to be an extended session of yarn chicken. * sigh *


Posted by Minding My Own Stitches at 8:57 AM

Oh my ......yarn chicken is NEVER fun. Maybe you could do the ruffle edge with a complimentary color?

The pattern is gorgeous. I can't wait to see this one come along.

I hate when directions are not correct, especially if the pattern has been edited and knit many times. Kind of makes me want to get my baby blanket pattern written and so on. Maybe that will be my next pattern writing project...

I checked out its project page and it certainly looks like a beautiful FO. I love this calming color you've picked out.

I can totally see why you were drawn to that one - just classic and lovely.
I have a love/hate relationship with baby blankets. I love the idea of giving them, but I generally hate the knitting of them. I've been debating another one - my coworker is pregnant again, and I made her the cat one for her first child. I feel like I need to make second child one too... but I don't really want to... I'd just knit a whack of hats and stuff, but she's in California... not a huge need for warm woolies.