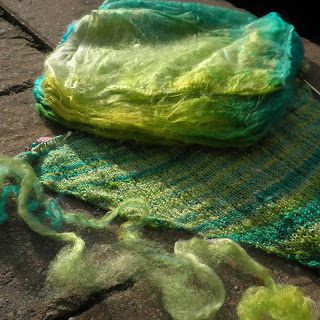 At the Ravellenic Games I'm competing in the Scarf Hockey event - my challenge is to draft this stack of hand-dyed silk mawatas and knit the drafted fibre into a Clapotis. I got the idea from the Yarn Harlot's blog here, but decided on a scarf rather than mittens.

Each mawata is the silk from one cocoon - it's whisper-thin and the fibers stick to everything. Sticky like a spider's web, right? These were hand-dyed by Sunnyside Ellen; if you want mawatas they are available from several sellers on Etsy. To start, peel off one mawata alternating from one side of the stack to the other to average out the variation in colour. To draft the fiber I poke a hole with my index finger roughly in the middle of the mawata and then tug the hole bigger and bigger until I have pulled a loop of fiber around my hands. Working my way around the loop I tug at sections of fiber until I have drafted out something close to a fingering weight. Amazing how strong the silk is! And then I pull apart the thinnest section to make an end and start knitting.

In the first five days of the Ravellenic Games I've knit the set-up section, the increase rows and made a start on the straight rows. Maybe I'm fooling myself, but I think I'm getting quicker at it. So is it possible to finish before the closing ceremonies on August 12? Maybe. We'll see how far I am this time next week! To see how far everyone else is with their projects check the links at Tami's Amis!

Posted by Minding My Own Stitches at 8:35 AM

I love those greens! Very lovely. I've always been curious about the silk hankies.

I think Clapotis was an excellent pattern choice!

I really love the color! I can't wait to see your finished clapotis! And suddenly now I have a hankering to make another clap. *goes to dig through the stash*

The color is gorgeous!!! So, is it fun? Or is it tedious?

Everything about this is gorgeous! Great pattern and yarn choice!

Beautiful colors for a clapotis. I love watching the Olympics and the extra knitting time.

That yarn is amazing. Good luck with the games

I love green, so I'm loving your color choice. It's so beautiful!

Ohmigosh that's gorgeous! Can't wait to see the finished project! Are you finding it difficult to drop the stitches with such grabby silk though?

Oh my goodness :O
Doesn't that take a lot of patience and time. Not sure I would have the patience for something like that.
Looks very lovely though and I like the colorway very much :)

It's comin' out so gorgeous! What divine luxury.
Knit Picks has a video on how to work w/mawata.

I'm always so envious of people who get to work with their own handspun, and oh my goodness is yours beautiful! The hankies are lovely, and they're spinning and knitting up wonderfully so far, I love the texture and stripes!

That is going to be just gorgeous!!

Interesting technique knitting with the mawata. How are you finding it?

The silk looks gorgeous! Good luck with the games.

Thanks for stopping by my blog and commenting! The colors of that silk is lovely! I've wanted to try that ever since there was a tutorial about it posted on the Knitpicks Blog.

The scarf is lovely and the colour is fantastic! Thanks for the explaination on using the mawatas I've only seen them a couple of times before and they intrigue me! I really hope you can finish before the end of the Ravellenics - I want to see the finished scarf! :)

"my challenge is to draft this stack of hand-dyed silk mawatas and knit the drafted fibre..."
Wow! This is so cool. I've never seen anything like it. So you're creating the yarn by hand? No spinning tools involved? This is just the neatest thing. I'd love to see more of your work on this project. Thanks for introducing me to something new!!

It's the first time I have heart of Mawata. So cool!

Good luck in the challenge!

Good luck in the challenge!

The colors are really striking, and thanks for introducing me to a new (to me) fiber! You don't mess around with your challenges - this is a biggie. I think you can do it, though!