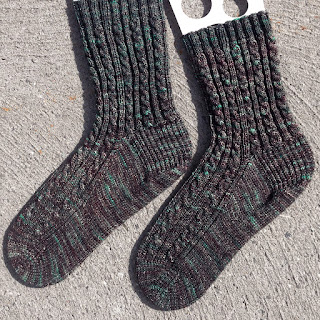 Thankfully this week has been a lot more successful than last week! 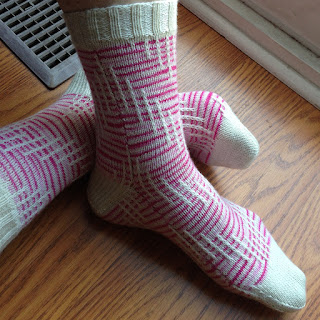 After repeated soaks and rinses, I was able to get the coffee stains almost entirely out of the baby blanket. After blocking (again) Gavin and I agreed that you'd never find the very faint discolorations unless you knew where to look. And besides, aren't babies messy little miracles? Chances are that young Chad - who was born last Monday  - will add some stains of his own to the blanket with regular use, right? So the blanket was packed up and mailed off. On the morning of his birth his "Oma" sent me a photo of the nursery and there in the crib was the baby quilt that my Mom and I made for his older sister almost ten years ago!

While knitting my second BFF sock at work, a co-worker admired sock one and tried it on. Glory be, it fit her! Good enough for me. Sock two has been completed, and I'll hand off the finished pair on Tuesday - finished with just a couple of yards to spare. There would NEVER have been enough yardage to make a pair of socks to fit my size 11 feet. Not a chance. 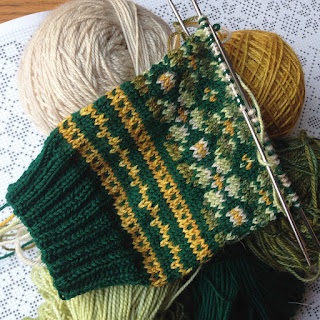 As promised I ripped Twisted Flower  back to the cuff and restarted the leg patterning. But that's about as far as I got. Seems like there weren't enough hours in the day to get any knitting done from Wednesday on!

And did I mention that my Ludwig socks were done? Yeah, they've been done for quite a while - I'm just now getting around to photographing and blogging them. I've already worn them and washed them :) Nothing like knitting and wearing Lorna's Laces to remind you as to why it's known to be the "cadillac of sock yarns". It is really gorgeous stuff!

On Friday morning I stumbled across a thread on Ravelry titled "Free to GTA Knitters" and, wow, a local knitter was destashing and giving away oodles of gorgeous yarn absolutely free. I was a bit late to the thread so most of the full skeins were spoken for, but there was a large lot of partial skeins of fingering weight sock yarn still up for grabs. I was on that in a hurry! Along with a handful of other Ravellers,  I met Annie of "JumperCables" at a Starbucks about 20 minutes from home to pick up my loot. She has awesome taste in yarn so I made out like a bandit. And, she kindly added a couple of full skeins to top up my haul so I'm rolling in yarn for the foreseeable future!

There were several shades of solid and tonal greens amongst the partial skeins so I decided to cast on a vanilla sock with a Fair Isle leg pattern. The patterns are from Alice Starmore's Book of Fair Isle Knitting - aren't they gorgeous? I'm switching up the CC colour every round or two and loving the effect. And I'm already musing about how the next pair might look if I switch up the MC and the CC every few rounds. I'm a huge fan of Alice Stanmore's sweater patterns - although I've never knit one - so I thought to try working the patterns and colour choices into socks. Fun! This might be my next obsession.

Posted by Minding My Own Stitches at 1:27 PM

I really love all your socks! I have to cast on another pair after I finish a quick shawlette. Maybe I'll fairisle ...Yours looks amazing

Your socks look great. I am amazed at people who KNIT socks. it looks so complicated with all those needles.

My LYS is closing (today's the last day, actually)...so I've scored a couple of the shop samples. I got a pair of socks that I was positive were not going to fit me but they fit so they're mine, and I picked up a Koolhaus hat today. It barely fits me but I know Little Man will steal it...

And then the yarn. I've come home with several of the lonely "one skein" colorways. All their friends were sold and there were just singles left.

Oh my word, Ludwig just get better every time I see them - so gorgeous. And the fair isle socks are splendid. What good fortune to be able to meet someone giving away yarn - it's what dreams are made of!

Congratulations on the yarn score. Looks like you are putting it to good use!

Love the socks...I adore those fair isle ones....oh my gosh! Can't wait to see them done!

Glad you found an owner for the BFF and those Ludwig I think have to be in my top 5 of your favourite socks ever made. Now onto those fairisle ones....love them I've got that book and it's fantastic, I'm really looking forward to seeing your progress on them. Also really glad the blanket turned out ok, I was hoping all week it would have.

What? Where was I when the coffee got spilled on the baby blanket you just finished before it got out the door???? I'm surprised I didn't hear #$%^&* all the way down here! LOL! I cannot imagine the look on your face when THAT happened....you should have seen mine when I was reading it! LOL! So glad you were able to repair the damages.....things like that are known to destroy marriages, cause animal abuse and a whole host of other horrific things. So glad everyone lived through it! And yes...the little guy will burp and throw up all over it...maybe even do some projectile vomiting on it from across the room so don't you worry....they will never notice those coffee stains! LOL!
OMG, OMG, OMG, do I adore the fair isle socks!!!! Is that a good book by AS? Could I learn from it or is it for people who already know how to do that? I probably need a Fair Isle for Dummies book. It is on my list to learn though. I love all your socks but I am "over the moon" for those green ones! Are the pink and white ones Ludwig? Those are pretty spectacular too and what a lucky woman is your co-worker! Just in case you forgot....I wear a size 10 shoe...just sayin'.

Congratulations on saving the baby blanket! I am a total klutz, so I'm sure I will have at least one such accident in my knitting life. Now I know what to do.

The fair isle socks are gorgeous. I've made a rule that I won't do two-color socks. I want color work to show! However, I'm constantly saying never -- and then going ahead to do whatever I swore off.

I am gonna start making socks! These are adorable and my kids need some new pairs for spring!