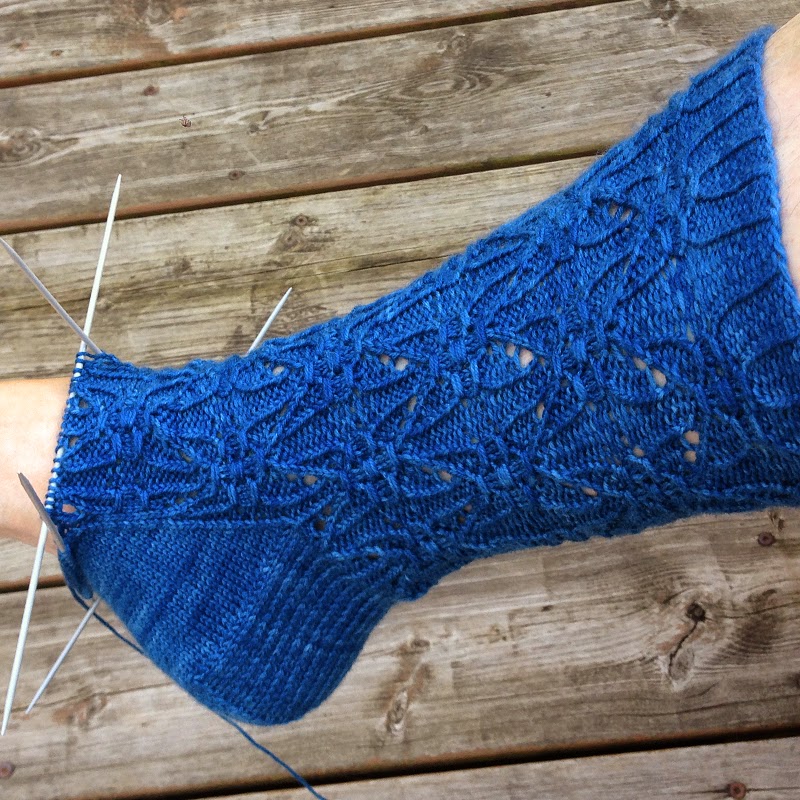 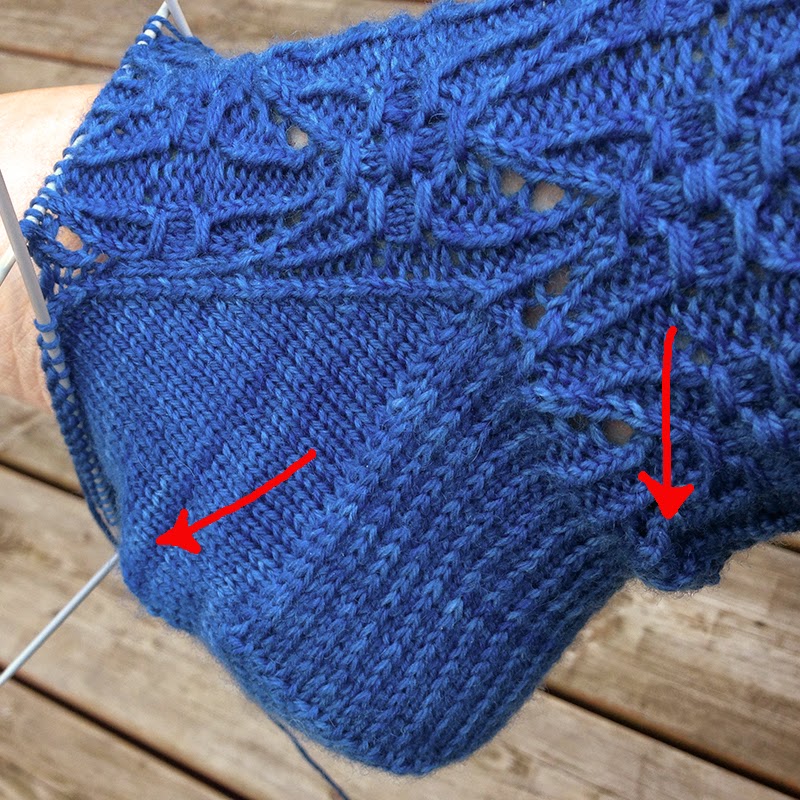 Last week I wrote "The recommendation from the designer is 370-555 yards. I've got 430 yards to work with, so wish me luck!" and just typing that sentence gave me pause. I'm knitting the large size; can I realistically expect to finish them with 430 yards? No, probably not. For a couple of days I considered omitting one vertical repeat on each leg - that would likely save enough yardage to squeak them out of one skein. But I couldn't bring myself to do it; I love these socks too much to shorten the legs. Instead I had a look at the yarn dyer's Etsy site, and yes, there are two more skeins available. Rather than skimp, I decided to finish sock one, weigh it and the remaining yarn, and then order a second skein if necessary. After all, there'd be enough left over from the second skein for some fingerless mitts, right?

After making that decision I picked up the needles again, finished the fourth vertical repeat on the leg and then carried on through the heel and the gusset. The heel is worked over 42 stitches, and that seemed like a lot, but I reasoned that the instep pattern is quite inflexible and probably that extra ease is needed. Sounds convincing, right? Yeah, until I finished the gusset decreases and tried on the sock this morning. If I hold my foot a certain way it doesn't look too bad but there's no escaping the facts:  there's a bulge at the bottom of the leg where the heel flap starts, and the heel and gusset are baggy. I should have known better.

Later today - when I am less annoyed with myself and this sock - I'll rip back to the start of the heel flap to add a row of decreases to address the fit problems. Despite my frustration, I still love these socks too much to not go back and fix this. Besides, with half the foot done I still have 67 grams left of my original skein. Narrowing the heel flap and tightening up the gussets will save yardage and make it quite possible to finish the pair from one skein. Fingers crossed again!

So my new plan is to rip back today and reknit to finish sock one by the end of this week. That way I can confirm that one skein is enough put that worry to rest. I've got a busy week ahead with meetings before and after work, but I'll be on public transit for two days and that means lots of time to knit. Now I'd better stop whinging about this sock and get on with my chores!


Posted by Minding My Own Stitches at 9:10 AM

Winston Churchill said that success is failure after failure with enthusiasm still intact... or something like that... ripping back is pants but it will be worth it x

The patterning on your sock is amazing and such a beautiful shade of blue too. I don't think I'd ever be able to work such an intricate stitch pattern on a sock........hope you manage to get the pair out of one skein

I still love those socks and yes this is definitely more theory versus reality, perhaps it was the week that was in it for us both? I love reading how you know how to fix that bulging problem. I would look at it and well I'd still be sat here next week looking at it. Fingers crossed you have enough in one skein.

Bummer that you have to rip out but wonderful that you know how. Do you put in a "life line" to do it?
I have yet to weigh my yarn but I will today. Either way I can't thank you enough for your advice.
The blue yarn is so pretty...what a lovely pattern too. I hope it all works out for you but thank goodness you can order more yarn if necessary. Have a great week!

You amaze me always on the way you calculate how much more yarn you need on a project! Sorry about the bulge, I think they look wonderful but I understand you'd want them to be perfect. I'm keeping my fingers crossed for you! Ps. thank you for your lovely advice today!

Yeah the majority of my socks are all too big...and its the heel, I decided...I have a very thin heel...and it's not very tall...so I need to shorten it....and dude just realized you are in Toronto...we could have met, I was there last week!

That sock is gorgeous... Do what you need to to make the. Just the way you want them! You will be glad you did am thinking...

I am always amazed at how you know what to do to modify a sock. I have one of her sock book designs on my YOP list and will try smaller DPNs for a tight fit.

Yikes! I can't remember if my comment went through for moderation?
I never cease to be amazed at your sock expertise. You always know what to do to modify for a good fit. I have one of Cookie's sock book designs on my YOP list. I am hoping 00 DPNs will make a tighter fit as I think on my Monkeys, I had used 2's.

My fingers are again crossed! I love the colour of these and understand you want them to be perfect. Good luck.

Good luck with ripping and alterning the heel. Have to say, though, even with those problems, the sock looks fantastic. The lace pattern is amazing and I love the shade of blue that you are using - it really makes the pattern pop!

Sounds like a plan, with all that work already invested, its good to fix that bulge now than be sad you didn't later. They are amazing socks!