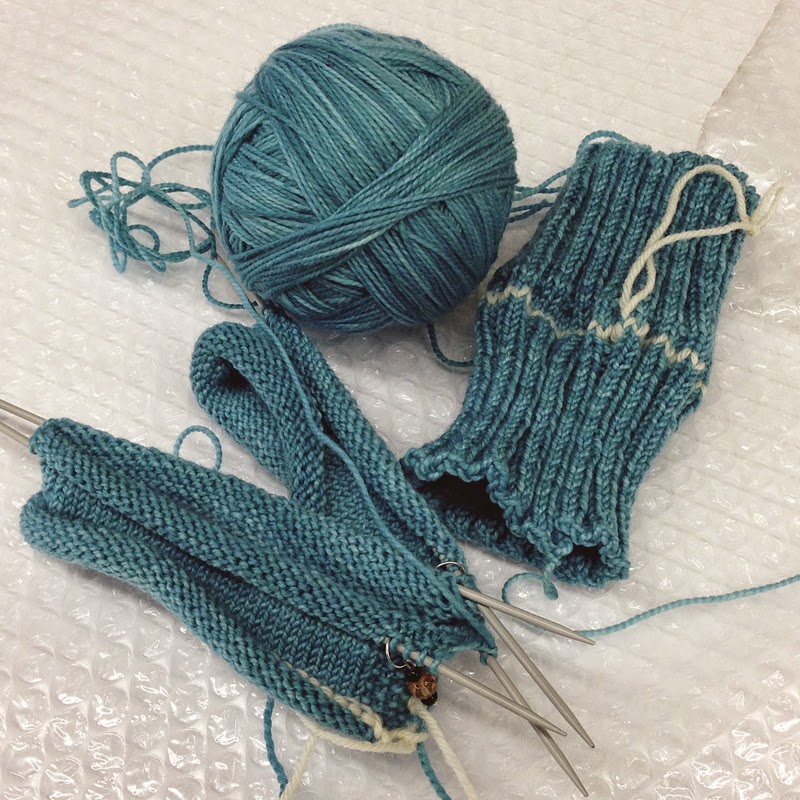 I haven't started Kwalla. I rewound the skein, but that's it... not a single stitch on needles. But I've got excuses, if you want to hear them.

excuse #1: We were away for a week, and because we were flying I took no knitting needles. I just took a plastic crochet hook and a couple balls of acrylic DK. I didn't want to risk any trouble at the security desk, and I certainly didn't want to lose any DPNs. We just got back a few days ago, and those days have been mostly spent catching up at work, grocery shopping and doing laundry. The trip was great and the weather was just perfect ... a much-needed break from the never-ending winter.


excuse #2: I joined another KAL - the Seasonal Sock Syndrome KAL over at Revelations of a Delusional Knitter - and the sock I've started is all-consuming. The pattern I picked is Fronkenshteek by Lisa Grossman (designer of the famous Shark Week socks), and it's absolutely crazy! You knit several oddly shaped pieces, which you then steek into smaller pieces, and then reassemble all the bits and graft them together into a complete pair of socks. The designer does warn that skills needed are Kitchener Stitch, Mattress Stitch, Courage and a Sense of Humor LOL!

I've knit the first segment - the ribbed cuffs for both socks. The scrap yarn shows where the cuffs are to be cut apart. Pretty straight forward.

I'm currently knitting the second segment - the legs/ankle for both socks. After a dozen more rounds, I'll be moving the live stitches onto scrap yarn, removing the provisional cast on and moving those live stitches onto scrap yarn and then cutting the knitted tube from top to bottom on each side to create two rectangles. In turn those two rectangles will be mattress stitched into two tubes with live stitches top and bottom, which will eventually be grafted to the cuffs at the top and the ankle area at the bottom. Not so straight forward, but okay.

The next segment I'm to knit is what the designer calls the Ace Bandage. It wraps around the ankle, heel and instep kinda like those stretchy pressure bandages. Mental. Don't even ask me about the looming Bermuda Triangle sections ... I'm trying to avoid thinking about those for now.

I hadn't planned to knit this sock monogamously, but there is a little issue about needles. And once again, the designer did warn me.

Have a lot of needles at the ready, because the more you can substitute needles for stitch holders and waste yarn, the less precious time you’ll spend shuffling and fiddling when you get to piecing and assembly, and the faster you’ll reach the finish line. Just saying.

As soon as I separate the heel section into two heels, I'll be using two sets of needles. And when I cut apart the legs/ankles, I'll be using four more sets - 2x top live stitches and 2x bottom live stitches. That's six sets of needles in play, at least until I start grafting things together. So I think you can see my hesitation about casting on anything else that uses the same size needles. I just don't have enough needles to go around!

A note about Fronkenshteek: it's a crazy way to make a pair of socks. It's the craziness that appeals to me. By the end of this project I expect to be pretty good at steeking, grafting and seaming ... presuming I complete them successfully and don't wind up with a pile of unravelled lengths of yarn. I also think that the socks are likely to be quite attractive, because the shaping creates cross-grained pieces in different directions which will shine in a tonal yarn, and the seams create an interesting piping effect around the leg and criss-crossing around the ankle and the foot. It's going to be an adventure!
Posted by Minding My Own Stitches at 10:40 AM

Sounds like you have very valid excuses. I find myself in diversions all the time... So I hear you.

What a fun adventure to make socks in such a crazy way! You're a hero for trying it, I don't even dare to start 'regular' sock knitting! I think no excuses are very valid, I stray from my YoP list very often without any tangible reason..

Understand the excuses and you are far more braver than me with those socks - good luck!

This sounds completely and utterly mad and very fun :D

Those are going to be some interesting socks when you're done!

Also, I was going through comments on my blog and I managed to delete yours and I can't get it back and I feel bad :( It was an accident.

Oh wow. My eyeballs are rolling about like sharks circling for a lkill. I'll just bow down because your a bomb a** sock knitter!

The sound very cool...way beyond my skills, but can't wait to see them!