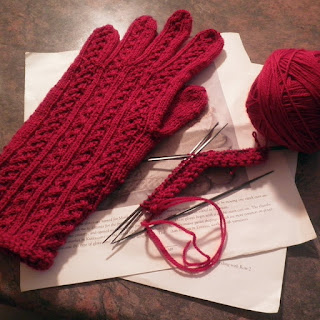 
I'm only slightly further ahead on my Year of Projects this week compared to last week. At least now I've cast on and started that second glove. Although it may not look like much yet, chances are there will be lots of progress this week. After all those are my only size 0 needles, so I have to finish this second glove before starting anything else. And by anything else, of course I mean socks.

Seems like that's all I feel like knitting these days ... socks, socks and more socks. And that's just when I feel like knitting; I've spent the last couple of days sewing instead. (More on that tomorrow). In the interest of not falling too far behind on my Year of Projects I've decided to knit some of the sock patterns in the book sooner rather than later. It's not a bad idea considering how much sock yarn I have on hand. Besides, socks make great Christmas presents so it's two birds with one stone, right?

Is it really mid-October already? Christmas in 10 weeks or so? YIKES!
Posted by Minding My Own Stitches at 7:37 PM

Wow, the glove is amazing. I think it makes sense to jump to the sock patterns - those are the ones you love the most, right??!!

Your progress over the year has been such a source of inspiration for me-- I really look forward to seeing what you're working on, and if socks are what you're feeling right now, then I say socks are the way to go!

I really love these gloves, I think its the combination of the red and pattern. Socks make the best xmas presents and as you say with only 10 weeks or so to go killing a bird with two stones is certainly needed.

Yes, sadly it is that far along in October, doesn't seem possible how fast time passes. Thanks for your visit and comment, much appreciated.

The beautiful red glove...wow wow wow. Fun to see you making something besides socks, lol. I should talk. I've not done much besides ghan in a good long while.

I am the complete opposite - I want to knit anything BUT socks lately... which is not good - as I still have several pairs to do for Christmas!

I love the colour of those gloves.

I absolutely adore how you're a sock knittin' addict. Why not?
This mitt is awesome and so much more classy than what's sold in the high end dept. stores.

10 weeks???? It sounds really scary when you put it that way. You are very good at these and the colour and pattern is gorgeous.

oh, those are going to be such beautiful gloves! But yes, please do move onto more gorgeous socks whenever you're ready!

I'm still in awe of those gloves, they are beautiful!