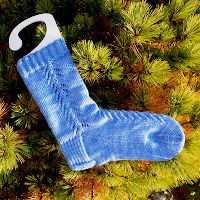 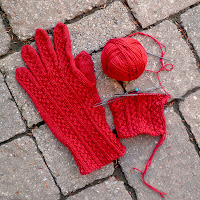 Finally I can show you some progress on my second of Merike's Gloves! I've knit the cuff of the right glove and started the thumb gusset. In the pattern the right is worked as the left with the shapings reversed. I'd prefer if full written instructions were provided for both gloves, but they're not, so I guess I'll have to keep my thinking cap on. It does slow me down a bit, because I don't want to start a shaping section unless I'm certain to have time to finish it.

At the same time I've cast on Juta's Stockings. The yarn is a lovely subtle tonal in summer sky blues from Studio June Yarn. Because the pattern is so simple - mostly stockinette with a simple column of lace on each side of the leg and the top of the foot - I can readily pick it up and put it down without losing track of the pattern. Easy, peasy; the first sock is already off the needles.

Having a second project on the needles helps make me feel like I'm making better progress on my list of projects. At least now I have something more to post about in my weekly updates. As well, making visible progress on one project makes me less impatient with the slow pace of progress on the other. So that's the plan going forward. Besides, the Christmas gift pile still needs several more pairs of socks.

Posted by Minding My Own Stitches at 10:28 AM

Both projects are coming along nicely.

I seem to be having a very sluggish October - must be something in the air!

I love the colors on Juta's Stockings. The gloves are looking great - I am so amazed with the intricacy of your work.

Wow, you sure to whip up some fabulous socks and gloves. Again your knitting skills make me jealous. Great job!!

Outstanding projects :O). I think that glove is stunning, so much more awesome than any sold in some boutique.

Your projects are always so stunning and complicated looking! :) Thank you for your advice on my not happy mitts--you should be proud of me--them mitts are frogged and already cast on, with cuff almost done in the nicer gray yarn. You are right--I am so much happier!!
*smiles*

Love the glove and I try to do the same when I knit socks or mittens not to start a shaping piece unless I can get it finished in the one sitting, my brain would simply forget where I was. I love the sock, the colour is gorgeous. You are making great progress on your list.

Knitting gloves alone scares me... I find the thumb on mittens annoying! So knitting gloves wins you a major award in my book... Knitting gloves that you have to think your way through the pattern reverse... Oh my... Its like the Nobel Prize of knitting awards!

Gloves are looking good, as is your new sock, the colour is lovely....I always have far too many things going on at once, but it's the way I roll!

I've ordered myself a sock book...nothing as flash as your ones...but a start!

Wow, you are seriously fast at knitting up socks! And it looks complicated to me :P The glove is coming on great.