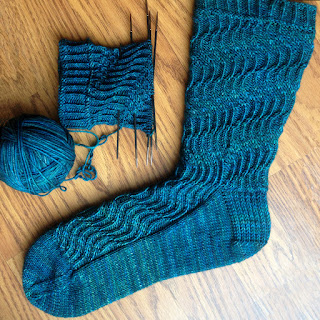 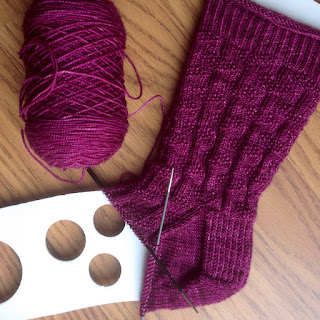 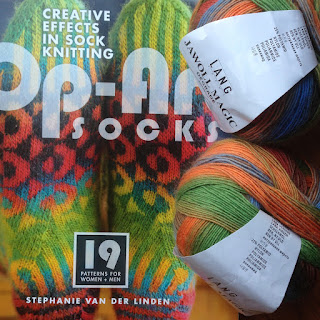 Posted by Minding My Own Stitches at 8:18 AM

The Plumberry colored yarn looks amazing in those Necker socks. And WOW - can't wait to see the Yaacov socks knitted up. What fun those look to be!

The blue socks are lovely and remind me of gentle rolling waves on a lake. The berry colored socks look much more intricate than they are and the color is one of my favorites. The newl acquired yarn is quite bright, BUT, it will be splendid when completed.

Those two pairs of socks are gorgeous, but the blue is fabulous - I can't resist a good blue! The gradient socks look fantastic, I can't wait to see yours on the needles.

I've seen that book at the library and looked through it. It has interesting patterns, but way too hard for me. As always, your sock skills rock!

It looks like you're really having fun with these socks and having seen the cover of the book I would have thought they were all stranded colour work but those Crest are gorgeous and I love the architectural look to the Necker ones and the plumberry just sets them off. Can't wait to see what you do with the colourwork socks!

These are two great pairs of sock WIPs. I like their saturated colorways. The Crest pattern really draws in the eye.

It is amazing how you can't see the change in yarns. All of the socks are BEAUTIFUL!