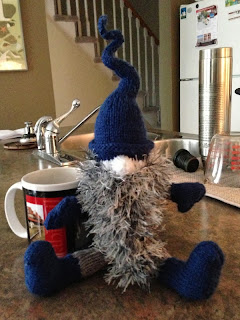 Comments: I've knit the smallest size of the Jultomtar pattern, which is plenty big enough. I might give Teeny Tomten a whirl just to see if I like the tinier iteration. About half my gnome's height is hat though, so it's a bit deceiving.

The pattern - every single little piece - is written to be knit flat and seamed. So that's what I did - because I tend to think that the designers know something I don't and I should do it the way I'm supposed to make sure of how it all goes together before I start redesigning it - but I'm shaking my head about it now. It's just ridiculous. Some people do go overboard converting things to knit in the round just to avoid the tiniest bit of seaming, but for crying out loud, this pattern goes too far with its determination to knit everything on straights. Working the pattern as written creates as much finishing as there was knitting; never mind that mattress-stitching a seam up the long and winding point of his hat was painful. Why?!?

I plan to cast on a companion gnome today, and this time I will convert everything to knit in the round ... and then we'll see! As well, in project notes from other Ravelers there is a repeated suggestion to hold the fun fur double for a lusher beard. Maybe I'll try that too for good measure. What's one more mod on top of all the mods I've got planned?

It's Friday - a cool and rainy Friday here in Toronto - so you know the drill. Click the link to Tami's Amis and check out the link list there for all kinds of awesome finished projects. It's sOcktober, so I'll bet there are socks, and maybe some Christmas craft ideas too.


Posted by Minding My Own Stitches at 8:55 AM

He is adorable!!! I agree with the cluelessness on knitting flat. I would suggest it was the designers lack of modern knitting culture that caused it. I am not a slave to making everything in the round, but where there is a sense of logic to it, I gladly do it. Can't wait to see the next one.

Oh my goodness, that is the cutest gnome!! I just think it is adorable. :)

I love him! You did a terrific job. I've looked at these gnomes several times and always stopped because of all the pieces and finishing. I'll be interested to see how your modifications work out.

Two Cables and a Frapp said...

Great looking gnome--I applaud your perseverance and your seaming:)

I do believe I can see the famous McAdam station on that coffee mug! How cool is that? Your gnome is adorable and the beard looks very full and lush. I'm sure you will be much happier with working up the pattern once you fix it ;)

I really do have to make one of these guys - they are so darn cute!

And I think Chrisknits is right, knitting in the round as much as we do is a bit of a modern thing.

Most of Alan Dart's patterns are knit flat, too.

Oh, gosh, that's amazingly cute! And now I know what to do with that black "fun fur" in my stash that I bought ages ago in a fit of madness.

What a personality your gnome has!!

I envy you your cool rainy Toronto afternoon. It's a hot muggy Baltimore day, here ... terrible for knitting :\

I agree with Katie, BEST.GNOME.EVER!

He is awesome! LOL'd at your opinion of flat knitting. Some ppl have preferences I've learned.

He made me giggle, I adore your gnome. Can't wait to see his friend. Sorry about all the seaming, I will admit that it puts me off knitting toys.

What a cool little gnome!!

I love that gnome but I agree with you about knitting flat and seaming.

Ooooh, bet your hands hurt. I've been doing fair isle, and the cramps on the thumb are bad. But cute results for you!.

Adorable! Knitting in the round would be happening here in my house--I really dislike seaming and finishing work in general! :)

Your gnome is a cutie, I admire your knitting skills and how you are able to review a pattern.

I have the same opinion when I used a pattern: follow it to the word. And sometimes it's not the best choice.

I love this gnome, his beard is my favourite! :)